News from the Southeastern Conference:

The Southeastern Conference announced today that Arkansas will be fined for a violation of the league’s access to competition area policy due to fans entering the field following its football game against LSU on November 15.

Arkansas will incur a fine of $25,000 because it is its second offense since the league’s access to competition area policy went into effect on December 1, 2004. Arkansas was also fined for a violation associated with a men’s basketball game against Florida in 2006.

The policy states that “access to competition areas shall be limited to participating student-athletes, coaches, officials, support personnel and properly-credentialed individuals at all times. For the safety of participants and spectators alike, at no time before, during or after a contest shall spectators be permitted to enter the competition area. It is the responsibility of each member institution to implement procedures to ensure compliance with this policy.”

“Celebration of a victory is understandable and appreciated but should be exhibited in the appropriate manner,” said SEC commissioner Mike Slive. “We cannot forget that significant risk of injury for student-athletes and fans alike can result from incidents such as this.”

The policy imposes financial penalties for violations in all sports sponsored by the SEC at the discretion of the Commissioner. Institutional penalties range from $5,000 for a first offense to fines of up to $25,000 for a second offense and up to $50,000 for a third and subsequent offenses. If an institution is penalized and subsequently does not have a violation for a period of three years from the date of the last violation, that subsequent violation shall be considered a second offense.

UPDATE: A statement from Jeff Long, the UA athletic director:

“Saturday was a great night for our football program, student-athletes and entire fan base. While we do not want to minimize the impact of the victory and what it means for Razorback Nation, we cannot have another incident of rushing the field at Donald W. Reynolds Razorback Stadium or entering the competition area at any of our athletic venues. Such celebrations put the safety of student-athletes, coaches and our fans at risk. We should all expect many special victories in the future and our hope is that fans will stay in their seats and continue the tradition of joining the Razorback Marching Band in the singing of the alma mater and It’s Hard To Be Humble.”

On Twitter, @crazyarkie sent me the photo below that illustrates that the UA positioned security and even some barricades in front of the student section f to discourage the fans, but they couldn’t contain the exuberance. 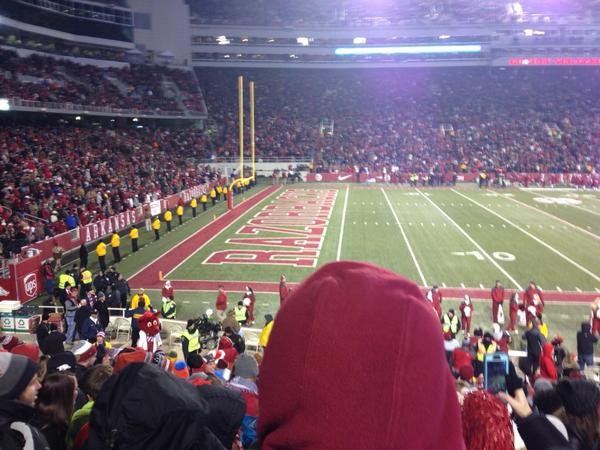