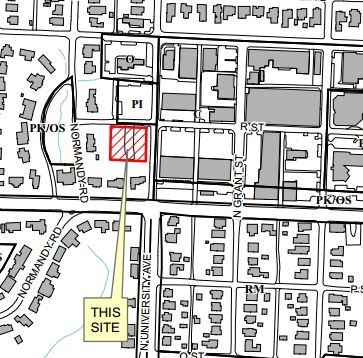 Neighborhood opposition is expected to be fierce tonight at the Little Rock Board of Directors meeting on a proposal by Regions Bank to use property at University and R Street (cleared land once used by Covenant Presbyterian Church) for a branch bank.

Regions says it needs the property to maintain a presence in the Heights because it is going to be unable to renew a lease on a current branch site at 1801 Fillmore.

The city staff opposes the plan. The Planning Commission voted against the plan 0 for, 9 against, with one absent and one recusal. The property is zoned residential. The previous use of some houses on the site for Sunday school was nonconforming. It abuts single-family homes. The staff sees the proposal as an intrusion into a single-family neighborhood. The full staff writeup lists many shortcomings in the proposal, including drive-through lanes immediately adjacent to a single-family home on Normandy Road and a 24-hour ATM machine.

But there’s more clout at work here than Regions. The vacant church building and houses figured in what looks like a canny real estate investment by heirs to the Stephens fortune.

Regions purchased the land in July for $2.2 million from an LLC that my research indicates has the same postoffice box as a foundation for Witt Stephens Jr., heir to a part of the financial empire fortune, and represented by Hal Kemp, a lawyer for the Stephens Group (the branch of the family with holdings separate from Stephens Inc.) Taxes (an estimated $550 a year) were paid by an LLC controlled by Witt Stephens’ sister, Elizabeth Campbell. Kemp declined to discuss use of this property when I asked him about it previously. The Stephens get theirs regardless with the land already sold to Regions. They purchased it in 2010 for $310,000.

It would be bad form for the business-friendly City Board to have the Stephens family score a $1.8 million profit on a land deal and then leave the payee with a piece of residential property. That perhaps is why emails circulating among the Heights Neighborhood Association (uniformly opposed to conversion of residential property to commercial property) report a “bad feeling” about tonight’s board vote.

According to county assessor’s records, Regions bought all the lots on both the south and north side of the 6000 block of R street from the Stephens LLC. But the branch would only use the lots on the south side for the 3,200-square-foot branch building. The application is silent on plans for use of the land on the north side of the street where the church once sat. That land also has been cleared. But with commercial use approved on the south side, it’s hard to see how a future board could vote against commercial use on the north side as well.