As I noted earlier, the Lottery Commission scrapped a planned conference call 10 minutes before it was supposed to occur at 2 p.m. Up for discussion was a contract extension with major games vendor Intralot.

I noted that locking in Intralot through 2019, as the extension did, could have presented instant complications for any planned legislative incursion into lottery operations. The legislature is involved because there’s a committee meeting at 10:30 a.m. tomorrow of the lottery oversight committee.

It’s a big deal. Camelot Global, the British gambling company, is to present a study of the lottery commissioned by the legislature. The lottery declined an invitation to participate in the cost. It undoubtedly expected the conclusion — a highly critical report that concludes a restructuring of governance is probably needed and maybe a turn to private management.

I’ve sought comments from Bishop Woosley, the Lottery director, but he said what I expected he’d say given a voluminous, just-arrived report:

I won’t have any comment today and probably tomorrow. This is sizable document with many conclusions and I need to see the data that they relied on in reaching those conclusions. I will wait to hear the testimony of Camelot tomorrow and work with our staff and vendors to formulate an extensive and complete response.

The report is not flattering. From the summary:

* There is a perception of mistrust and general negative publicity towards the Lottery

* The launch of the Lottery did not follow best practice and issues such as inflated management salaries and early mistakes still taint the lottery’s image.

* There are too many games in market:

* Vendor costs are significantly higher than industry and Peer average

* Retail execution is inconsistent and in certain instances does not follow best
practice. A greater focus is required on chain retailers

* The organization requires political support and a focus on sales & marketing

The report contends sales can be grown with net income rising to $122 million by 2019, against $76 million now.

How? PR, mainly. The recommendation is to change the perception of the lottery as a gambling operation into a consumer goods and marketing organization. How?

* Re-boot the Lottery’s image and brand — negativity is failing the Lottery’s opportunity to grow. This should be done by driving out beneficiary understanding and better communication of the Lottery’s offering.

?* Reduce the number of games and focus on player needs. There are too many Online Games and too many Instants Games. Employ range management and focus on a Rate Of Sale (ROS) strategy
?
* Portfolio mapping — review games offered versus needs and games inmarket. Develop games and promotions for Arkansans and don’t deploy Vendor innovation at whim.

*? Establish an Insight (Research) Division to understand players and grow player base. This is the forerunner of a consumer goods business mind-set
?
* Employ brand activation. There is a need for consistency in marketing messaging and better retail execution of product

* Instill marketing effectiveness and a Return On Investment (ROI) process within Senior Management.

* ? Recruit experts to the Lottery who understand consumer goods and customerappeal. Build-out brand demand based on insight and customer understanding

* Focus on Vendor alignment and value for money in upcoming Request For Proposals (RFPs)
?
* Protect the Lottery as an entity and as a consumer business. Negative Public Relations (PR) stops player recruitment and impacts trust

There’s a lot of jargon there. As an established pro in the gambling business, Camelot has some background to suggest more careful management of the types and numbers of lottery tickets sold could produce better results. Pushing hard for more sales in major retailers is something the Lottery has been working on — against opposition from religion-based lottery critics. Positive public relations and better advertising? This could mean money. Better PR would include dampening of persistent legislative criticism, which presumably could be addressed in that last idea about “political alignment and set-up” of the commission and staff. 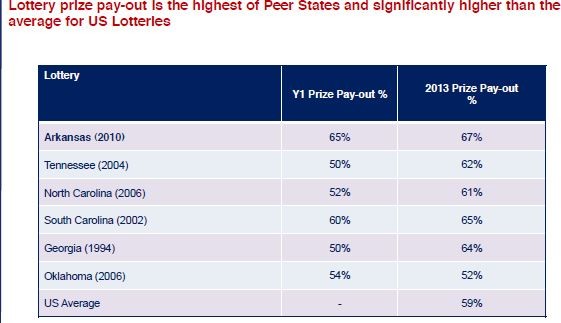 Relevant to the lottery’s ongoing negotiations with Intralot is the summary’s finding of much higher vendor costs in Arkansas against lotteries with more sales. The Arkansas lottery pays out more in prizes, too. In other words, it’s somewhat easier to win here, which you’d think would encourage play, but participation has been falling, the report says. Oddly, players in Arkansas think winning chances are low.

The report is full of criticism — overlap in the national Powerball and Megamillions games, for example; too-high-priced scratchoff tickets; a points-for-losing-tickets program that helps only a small percentage of players at high cost. Also the age verification process on lottery ticket machines is inhibiting play. (This grew out of religious objections.) Advertising is faulted for too many messages and poor production values and borrowing ads from other states.

Organization? The consultants mention, as expected, outsourcing or a “private manager.” The report says the lottery runs like a state agency when it should operate like a private business. The lottery commission should all be appointed by the governor and considered based on expertise. The legislature should have oversight, “but not in a way that hinders progress.”

Immediate action: Get a five-year plan, beginning with review (i.e., changes) in governance in the 2015 legislative session.  “Engage press and all stakeholders in the ‘Value of the Lottery.’

The legislators who set up this system were Democrats and long gone. Republicans with a mind to change are now in control and indications are that the governor’s office is on board with that. What governor doesn’t like total control of a state commission churning $400 million in cash flow?