UPDATE: He fell one vote short of entering the hall.

As the New York Times writes, Allen has a complicated history . And no story about Allen is complete without a retelling of his arrival in professional baseball, in Little Rock, as the first black player for the Arkansas Travelers. It was not a happy time — as Jim Bailey has written about eloquently in the past — and Allen says today he’s past it. But history does live on. Writes William Rhoden:

On opening night, 7,000 fans squeezed into Little Rock’s Ray Winder Field to watch Allen become the first black player for the Arkansas Travelers. There were all kinds of unwelcoming signs outside the stadium. One said, “Don’t Negro-ize Baseball.” The first pitch was thrown out by Gov. Orval Faubus, who in 1957 tried to bar black teenagers from attending Little Rock’s Central High School.

For a young man from Chewton, Pa., the experience was terrifying and overwhelming. Allen wanted to go home. But when he made the collect call to his mother, she was having none of it.

Did Little Rock alone explain the silent and unpopular player he would become? Hard to say. The article does note that Little Rock fans voted him the most popular Traveler.

Fuller details of Allen’s tumultuous start in baseball can be found at the Encyclopedia of Arkansas. It writes of events leading up to his first game, which included a fielding mistake by Allen and two doubles:

Little Rock sportswriters made passing reference during spring training to Allen’s race as they wrote about the upcoming season, but the fact that Allen would be the first black Traveler was never reported. Jim Bailey, an Arkansas Gazette baseball writer, confirmed years later that Gazette editors told reporters not to mention that Allen would be the first black Traveler. The newspaper had suffered economically for its stand in support of Central High’s desegregation and adopted a different approach to the integration of the Travelers. “The editors decided we’d be better off not getting things all stirred up again,” Bailey said. The Arkansas Democrat adopted a similar approach. In pre-season articles, his race was mentioned occasionally but not his being the Travelers’ first black player.

Allen was the last player to leave the park that night. He found a note on his car’s windshield that read, “Don’t come back again, nigger.”

Allen led a life separate from his teammates during his season in Little Rock. He lived with a black family in a black section of town (Little Rock’s neighborhoods were segregated). He ate in restaurants only when accompanied by white teammates. He received threatening notes and letters throughout the season.

Even during the games, Allen heard racial slurs from the grandstand as he returned to the dugout between innings. Despite this, he led the team in hitting at .290 and the league in home runs (thirty-three), runs batted in (ninety-seven), and triples (twelve). His thirty-three homers by a right-handed hitter remained a Traveler record for nearly forty years. Fans voted Allen the team’s most valuable player at season’s end. 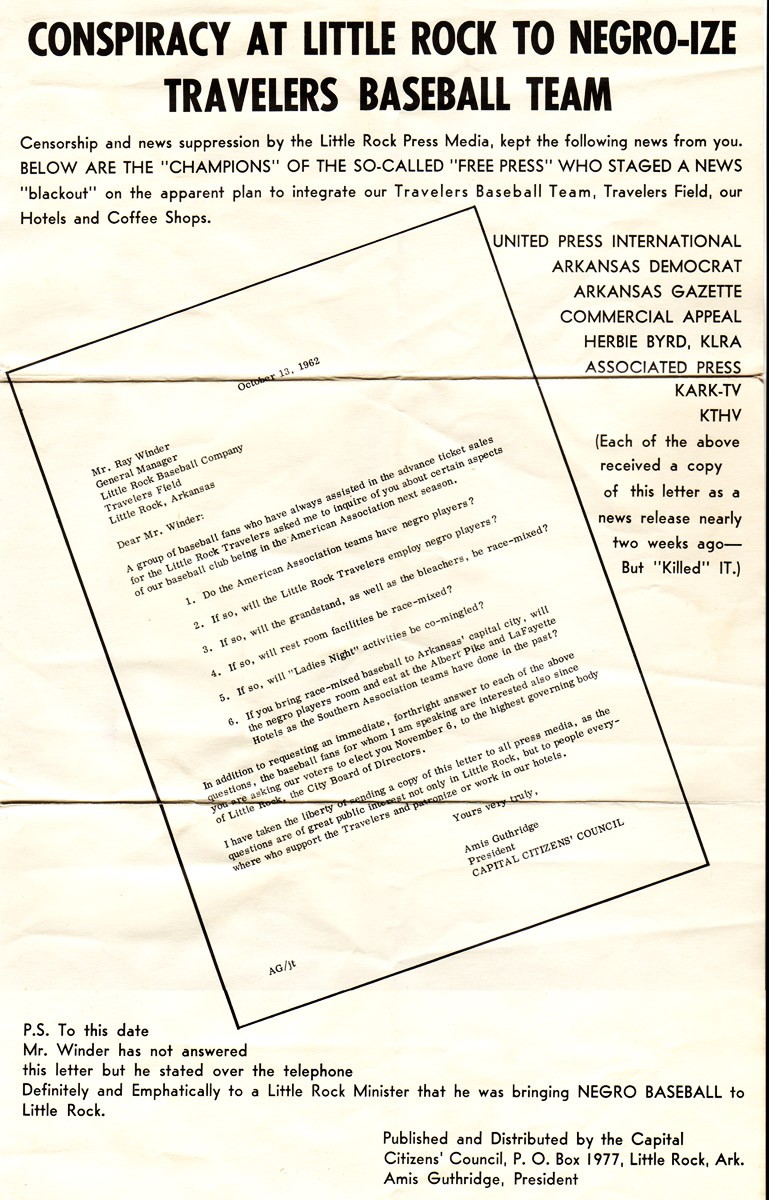