Another split between city planning staff and regulators has emerged on a proposal to build a Popeye’s chain restaurant at 5514-5520 West Markham Street, across the street from the War Memorial Golf Course pro shop.

The Mid-town Development District Advisory Board approved the proposal Nov. 21, with some minor revisions. It is before the Little Rock Planning Commission Thursday, Dec. 18. The city planning staff opposes the rezoning, a full discussion of which can be found here. Whatever happens at the Planning Commission goes to the City Board for final action.

Overall staff is not supportive of the request. The development is proposed within an area which has been identified on the City’s Future Land Use Plan as Office. The commercial uses have primarily been located nearer the intersections of West Markham and University Avenue and West Markham and Fair Park Boulevard/North Van Buren Street. This area is an office corridor. Staff does not feel this is an appropriate location for a commercial use and more specifically a fast food restaurant.

This is reminiscent of the fight years ago over a proposal to put a McDonald’s one lot east of Van Buren. Neighbors said it would lead to spot commercial zoning along Markham to the east and, indeed, numerous fast-food restaurants followed. In a touch of irony, the McDonald’s is now gone, razed to make way for a bank branch.

The planning staff strives to maintain orderly growth. The Planning Commission and City Board sometimes are influenced by other factors — money and clout.

A location on a rising stretch of busy thoroughfare with a sometimes problematic intersection at the entrance to St. Vincent hospital a block west, amid an office stretch, doesn’t strike me as a perfect place for a busy drive-through fast-food restaurant. Indeed, that criticism of the McDonald’s, placed on a narrow lot, ultimately contributed to its demise. Think left turns out of such businesses. Admitted: I do like Popeye’s. 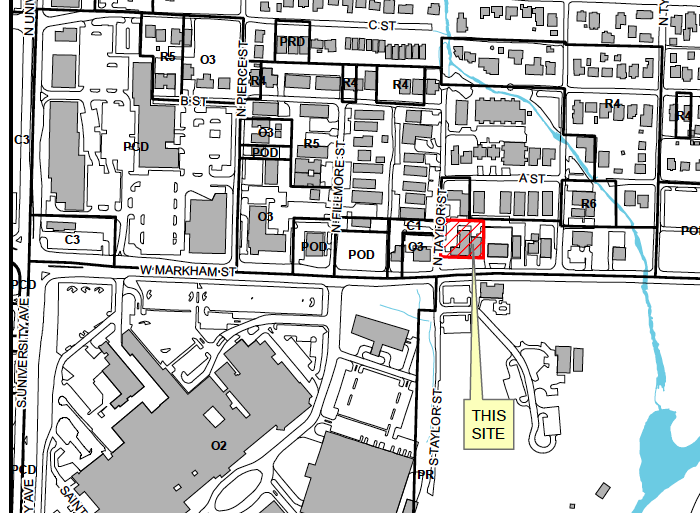