Somehow, I don’t think the big full-page ad in the Arkansas Democrat-Gazette announcing a full range of on-line college courses at the University of Arkansas was a coincidence of timing.

Elsewhere in that section of the newspaper was a news article about a meeting a Petit Jean Mountain at which representatives of University of Arkansas System campuses began planning a fall rollout of the System’s eVersity — expanded on-line education including degree completion.

(CLARIFICATION: Apology to friends at D-G. My suggestion was NOT that news story was connected to ad. My suggestion was that UA knew news coverage was likely of System meeting for on-line education and wanted to trumpet its own competing, existing program the same day any resulting article appeared.)

I place emphasis on System because the Fayetteville campus, known simply as the University of Arkansas, has not provided a participating faculty member for eVersity planning. Its faculty government has not reacted warmly to the idea. Chancellor David Gearhart resisted loaning campus money to the project.

So now comes UAF with a high-dollar tout of on-line college here and now, with new courses not in the fall but January 2015. (Passing thought: Wonder if UA is advertising on-line? That would seem a good place to reach people presumed to have the savvy to work in on-line degree programs.)

Backers of the eVersity had always said the individual campuses could continue with existing on-line programs and the hope was that all would learn from each other. At yesterday’s planning session, the UA vice president leading the eVersity, Michael Moore, emphasized the 300,000 Arkansans who’d taken some college courses but never completed a degree. Competition is good, right? Perhaps so. But I don’t think I reveal any secrets in saying there’s friction in high places as a result of UAS and UAF differences on this issue.

Another small item of interest yesterday was the promotion of yesterday’s eVersity planning session on Twitter by Johnny Key, the former state senator hired earlier this year as lobbyist for the UA System Fayetteville campus. (CORRECTION: Of course Key was hired as System lobbyist after finishing as finalist, but runnerup to Randy Massanellia as UAF lobbyist). Typical was his tweet with photo below quoting a participant from the Criminal Justice Institute. Key’s bipartisanship is also well-timed. He’s apparently the front-runner for consideration to move from his $130,000 lobbying job to the $201,000 job as head of the Arkansas Department of Higher Education. Current director Shane Broadway, also a former legislator, has been hired as Arkansas State University’s $185,000 lobbyist. 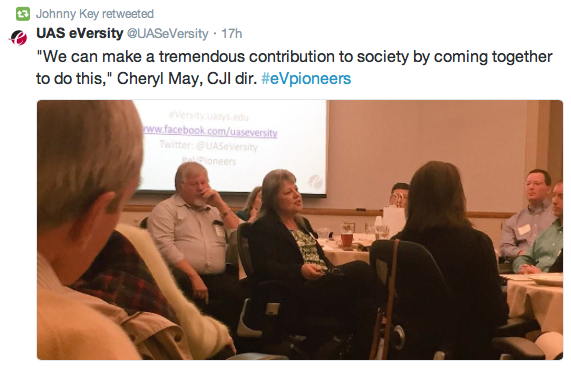