Disability Rights Arkansas says the state’s Booneville Human Development Center should be phased out and its residents moved into community settings.

The recommendation by the federally funded advocacy group is based on a report detailing shortcomings at the facility. Said the group:

“It is shameful for the state of Arkansas to house people in a facility in these conditions,” said Tom Masseau, executive director of DRA. “We will work to find new and more cost effective measures to ensure Arkansans with Disabilities are receiving appropriate services in the least restrictive setting.”

You can read the full report here. I’m seeking a state response.

The report cites deterioration of buildings at the center despite significant state investments, and disproportionate use of restraints on residents compared with other facilities.

The  report recommends a halt to new admissions and the phase out of existing residents over 12 to 18 months, either to community settings or to other human development centers. Unused buildings need to be sealed to prevent current residents from entering, the report said. It recommended retraining of staff to avoid use of restraints and a better policy for tracking use of restraints.

The Booneville center is one of five intermediate facilities for people with development disabilities. It currently houses 129 people, with an average age of 45. Most have some form of mental illness in addition to developmental disabilities. The Human Services Department employs 311 people at Booneville.

The report is full of photos and descriptions of decrepit buildings. David Koon wrote memorably about many of them in a cover story for us. They remain from the days when the facility was a state tuberculosis sanatorium.

Today, much of the facility is inaccessible to people with mobility problems.

The report reopens a hot-button issue — institutional versus community care. Some of the strongest advocates of the human development centers are families of residents. But the report notes that Arkansas operates 32.8 intermediate care beds per 100,000 residents, versus a national average of 9.5. DRA says there’s a preference for community services even in Arkansas — with a waiting list of 40 for a space in one of the centers but a waiting list of 3,000 for community-based service. And 24 of those on the list for a center would also take community-based services. The cost of center residency is about $117,000 a year per resident versus about $59,000 for home or community-based care. DRA says that more than half of Booneville’s residents have mild or moderate intellectual disabilities and could be moved into the community. It thinks the legislature should shift money from institutional to community care to allow this to open.

DRA said it was concerned that restraint use at Booneville, such as the restrain board shown above, exceeds that at similar centers in Arkadelphia, Jonesboro and Warren. In June, for example, mechanical restraints were used 52 times and drugs were used 17 times, though professional organizations have recommended elimination or reduction of restraint use. The restraints were used for 51 instances of aggressive, destructive or injurious beheavior. By contrast, Arkadelphia had 59 such episodes the same month but used mechanical restraints only six times and drugs not at all. The following chart compares restraint usage at Arkadelphia, Booneville, Jonesboro and Warren over four months. 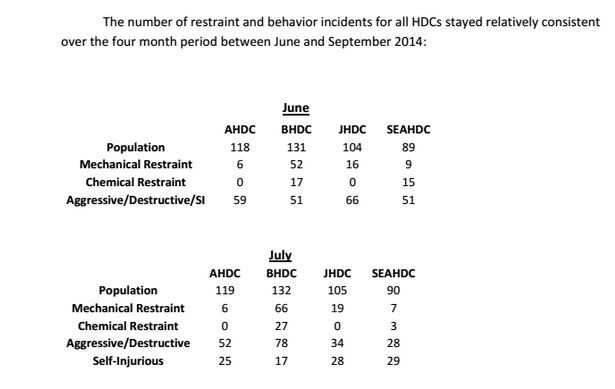 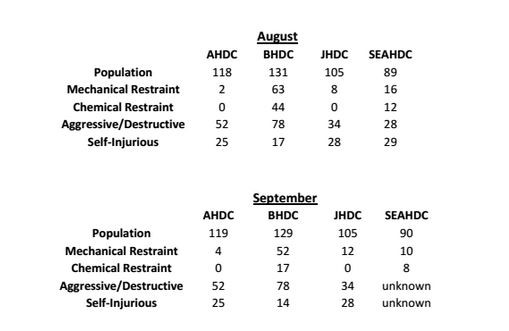