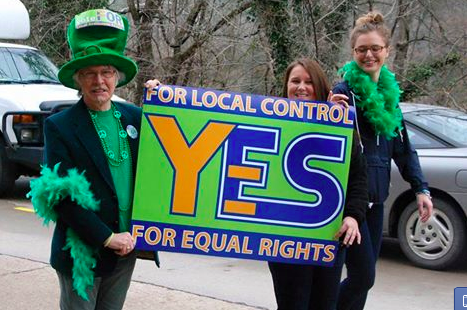 They had a fine St. Patrick’s Day Parade in Eureka Springs Saturday and I’m indebted to the Arkansans United Against Unjust Laws website for a couple of photos about the activism underway to preserve the city’s new civil rights ordinance, with its protection for sexual minorities.  I was tipped by a new clergyman in Eureka who’s joined the effort after working on similar campaigns on a previous assignment in Washington state.

If anybody can keep their city fair, it’s Eureka.

They tell me the St. Patrick’s Day Parade in Little Rock yesterday was a lot of fun despite the rain. Mayor Mark Stodola participated. He threw candy. He didn’t carry a sign promoting a civil rights ordinance, since Little Rock doesn’t have one.

Eureka Springs voters will get a chance May 12 to ratify the ordinance passed by the City Council to get it on record ahead of the activation this summer of an anti-gray law passed by Sen. Bart Hester that is meant to preserve legal discrimination against gay people by blocking local ordinances. The Eureka ordinance should provide a sound basis to demonstrate the state law had unconstitutional discriminatory intent aimed with no rational basis at a targeted minority. It would be nice if Little Rock made a gesture of belief in equality, but directors such as Lance Hines don’t seem to want any part of it.