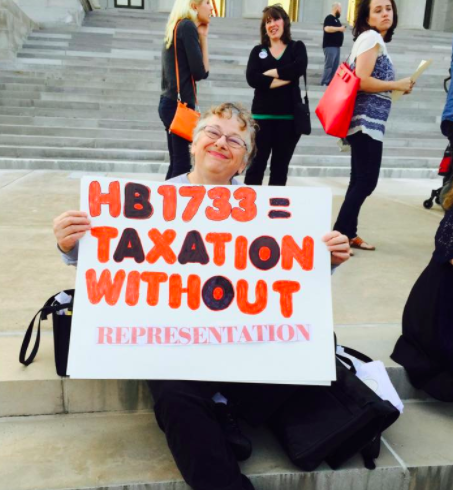 Moments later, I saw a report from AP confirming that directly from Cozart himself. I’d attempted to contact Cozart but he didn’t return my e-mails.

This  is how AP reported it:

Republican Rep. Bruce Cozart told The Associated Press Tuesday that he has deferred the bill and that it won’t come up again this session. Cozart says he couldn’t get the cooperation needed from proponents and opponents to advance the proposal.

The major force behind the bill were lobbyists financially tied to the Walton Family Foundation, which supports expansion of charter schools and has backed several enterprises that have harmed Little Rock School District desegregation efforts. The attention on Walton ties to the bill — a group that supports their aims took Cozart and other education committee members on a junket to Washington last summer, I reported over the weekend — had grown nationally, with prominent mention on Diane Ravitch’s widely read blog among others.

UPDATE: I got a limited response from Cozart, though not answers to all questions I’d asked:

Sorry I am just getting a chance to read my mail.

1733 has been place on the house ed committee deferred calebndar, and will stay there till session has ended.

UPDATE II: Cozart called. We talked about his decision. If I may summarize, the input of school boards and administrators around the state made a big difference. The superintendent of the district where Cozart was a school board member for 10 years opposed the bill.

He said Scott Smith of the Walton-financed Arkansas Public School Research Council had brought him the bill. He said the “writers” of the bill wouldn’t agree to amendments he had in mind and neither would opponents. He said he’d filed the bill without much thought, but soon learned of complications. He said many superintendents were concerned that it could cover whole districts when only a single school might be in academic distress.

“I’m a public school guy,” he said. He said he wanted a bill that was more “school pointed” than district pointed. He also said that while he understood why charter schools might like not to follow the Fair Dismissal Act, he wasn’t ready to give it up completely. “We still need a process,” he said.

He said “the governor wanted something like this.” But he also emphasized, “This was not his bill.” He said he’d received assurances from many parties, including school administrators, that they’d sit down and talk about ways to address his desire to do something about schools that aren’t achieving.

He said he wouldn’t send the bill to interim study because “it needs a complete rewrite.”

Opponents of the bill say Cozart, in defeat, is being disingenuous. They say he’d have run the bill had he had adequate support, but had failed to bring some Republicans to the cause. They also said he refused amendments offered by several groups.

The rally in opposition to the bill at the Capitol tonight turned into a victory party. Cheers erupted when the news was announced to a crowd of about 400.

Here’s Ross’ take on the decision: “We hear there was pressure from the Walton family who are tired of the bad press.”

Indeed. And it will continue when plaintiffs in the lawsuit over the state’s takeover of the district — which would have provided a speedway to privatization under the proposed law — begin questioning subpoenaed witnesses about their ties to the Waltons and others that have invested big money in wanting to see the district heavily charterized. (Yes, Gary Newton apparently got served, after the Walton lobbyist ran away from a process server on Monday, according to state Rep. John Walker’s eyewitness account.)

The public outcry was vital in this defeat. I suspect even more vital was the entry of the PTA, the School Boards Association and, particularly, the school superintendents, in the fight. What was about to happen to Little Rock could happen to anyone — a loss of school boards, an expropriation of local property tax millage, the required surrender of facilities for no charge.

A unified Little Rock legislative delegation, at least those primarily serving the Little Rock School District (no West Little Rock Republicans were among them) turned up at a vibrant and packed community meeting on a sodden Monday to begin fighting this bill.


The nine education groups that united to fight for keeping public schools public had an impact (even if the mainstream media blew off their news conference yesterday). Their importance was felt in the critical House Education Committee, split 10-10 on partisan lines. But opponents of the bill believed sincerely that, particularly thanks to school district opposition around the state, Cozart couldn’t count on all 10 Republicans. That created a daunting arithmetic problem with 11 votes needed for passage.

This fight isn’t over. The Little Rock district, barring a good court outcome, remains in academic distress and in control of the state. The state could easily today contract with a Walton-favored private school operator to take over management of one of the six distressed schools. But they couldn’t take property taxes. They couldn’t get free facilities of their choosing. They couldn’t fire employees at will. They couldn’t ignore the LREA contract. And the minute they tried to invent “success” by shipping out difficult students to restock the schools with students better situated to achieve, I know a few thousand people that are now equipped to call their hands on it.

It’s better that this fight was won today. But the fight isn’t over. And continued attention will only build support for a potential initiative campaign to overturn some of the worst meddling of the Walton billionaires in local school operation. But the governor has promised the Billionaires Boys Club to do things their way, including b appointing an unqualified former legislative tool of theirs to run the Education Department. The price of local autonomy still remains eternal vigilance.

Such a great night for AR public schools! Let’s rest tonight and then get ready—you know these rich boys will hit us harder next time. I hope voters remember to vote out those guys beholden to the Waltons.

Bill Kopsky of the Citizens First Congress, the grassroots activist who worked in organizing the opposition, posted the following on Twitter. He also told me in a telephone interview: “Privatization just won’t work in Arkansas.” He added that the research shows it hasn’t worked anywhere else. 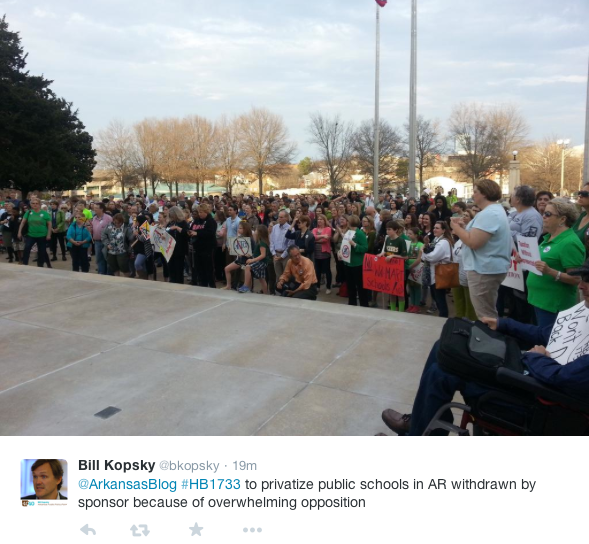 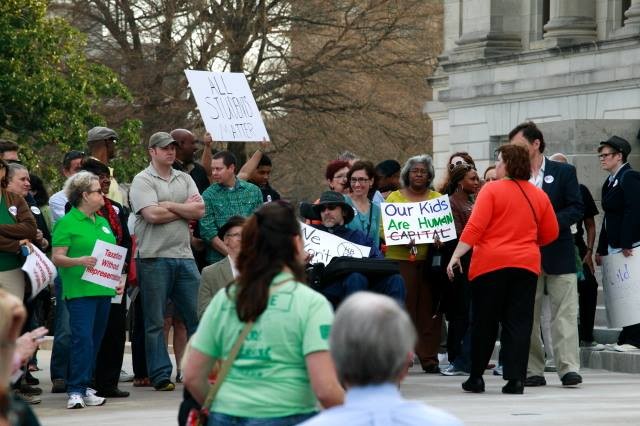 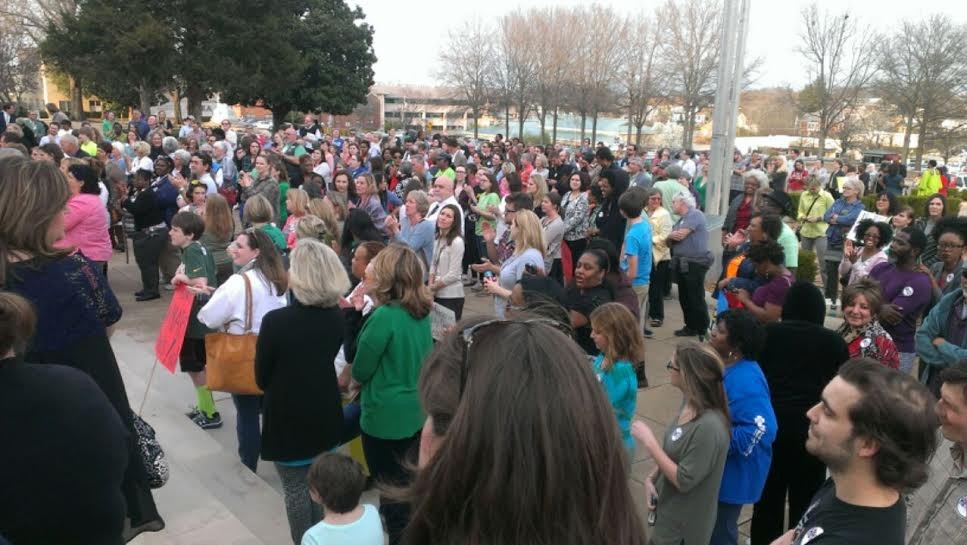 Statements came in from national groups hailing the development:

Little Rock, AR — The Alliance to Reclaim Our Schools (AROS), a national community/labor table that fights for the public school system, has responded to the success of an Arkansas coalition in stopping a proposed bill there that would have privatized whole school districts across the state.

“Public education activists beat the Waltons in their own backyard. The Waltons were touting so-called ‘success’ in New Orleans, so AROS asked me to weigh in with the facts.”

Karran Harper Royal helped the Arkansas coalition with information about the New Orleans School Recover District, a long-term privatization failure. A letter from Ms. Harper Royal and a parent in Chicago were published in the Arkansas Times this week.

Statement issued by Mark Robertson, co-chair of the Citizens First Congress and a Little Rock parent:

“We are proud that Arkansans recognized that privatizing public schools is a failed strategy across the country and we rejected it here. We need to keep our focus on research proven reforms that we know will boost the learning of every student in Arkansas.”

Citizens First Congress and eight other organizations across Arkansas mounted a campaign to stop the late-session bill, HB 1733, which proposed to turn over whole school districts in Arkansas to private entities if one school within them was deemed “distressed.”

Statement issued by Jitu Brown, Executive Director of the National Journey for Justice and a leader of AROS:

“We think we can learn a lot from the Arkansas fight. And we were proud to be able to connect parents in New Orleans and Chicago with parents in Arkansas. From now on, we want the great organizations and coalitions who are fighting to save public education to have connections with their brothers and sisters across the country who have learned from the battles.”

The Alliance announced that it would be inviting partner coalitions across the south to come to Arkansas in May to hear from the groups who fought the legislation and to share their own strategies.

The Alliance to Reclaim Our Schools (AROS) is a national community/labor table of organizations of parents, students, teachers and community members who are fighting for the public schools our children deserve.