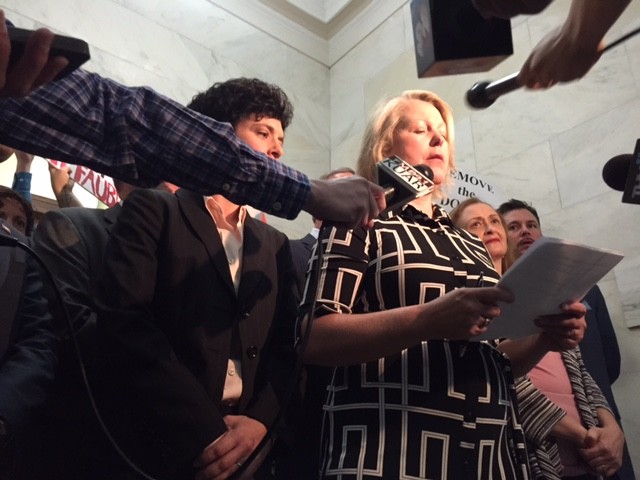 Immediately after Gov. Asa Hutchinson’s press conference
announcing that he will ask the legislature to recall discriminatory House Bill 1228, Tippi McCullough of the Stonewall Democratic Caucus announced a petition drive to ask Hutchinson to issue an “all-inclusive”   to “dictate freedom and equality for all citizens, including people on account of sexual orientation, sexual identity, disabilities and all other classes. The order would “remove the doubt” — the latest battle cry — that Arkansas welcomes diversity and inclusion and to “revive the spirit of Southern Hospitality,” McCullough said. An executive order would apply to all state agencies.

McCullough thanked the governor on behalf of the Stonewall Democrats for listening to the opposition. But, she said, “I’m concerned it may not be enough.”

Sklar declared that religion is not in need of defending, that the First Amendment is alive and defending religion, and “if anyone has a problem with [religious discrimination] I want them to come to the ACLU and we will help you.” Sabin told the crowd 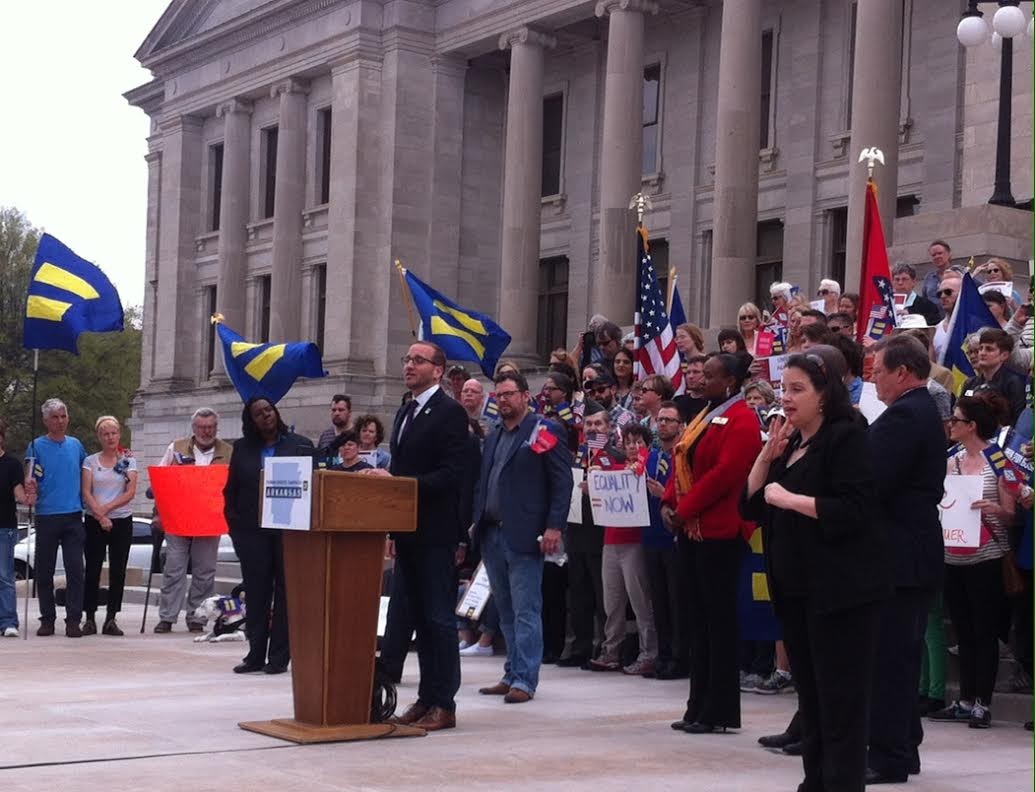 that “if it weren’t for all the voices [the governor] heard” from grassroots activists “he would not have made his statement” that he made today. “The governor confirmed that it was a bad bill for Arkansas.” Armstrong said that Sabin had gone to the governor with HB 1228 sponsor Rep. Bob Ballinger to ask for amendments that would remove language that would distinguish the bill from the federal RFRA, but that his argument “fell on deaf ears” and noted that he was “muzzled” during debate in the House chamber yesterday. “If we don’t listen to you, who were we sent here to represent?”

Burkhalter, who ran unsuccessfully for lieutenant governor on the Democratic ticket, warned that one of the bill’s effects would have been to kill business in Arkansas and require deep budget cuts in higher education and leave the state with fewer educated students to serve the business community.

“We serve our hamburgers with a side of french fries, not discrimination,” McGehee said.

Opponents of HB 1228 gathered around 12:30 on the steps of the state Capitol to hear from Human Rights Coalition leader Chad Griffin. State Rep. David Meeks, meanwhile, tweets that the HRC has a “radical agenda” — working to stop discrimination against thousands of Arkansans. Who is radical, someone who believes in creating a second class of American citizens or someone who believes that all men and women are created equal?