Part of his plea deal is that the federal sentence could be concurrent to whatever sentence he gets in a related state case. 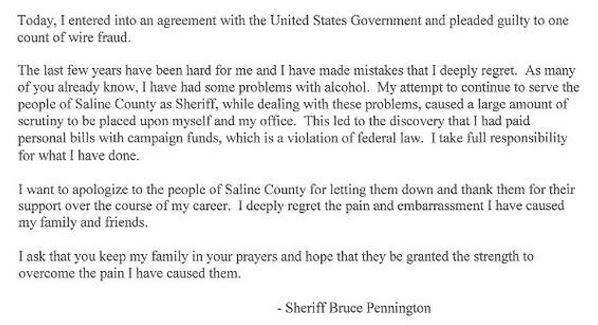 When he was charged with felony state charges last year, including converting public money to persona use, Special Prosecutor Cody Hiland said the investigation covered mutliple juriddictions and further charges could be expected.

He’s the third Arkansas politicians to be charged in federal court for conversion of campaign money, along with former state Treasurer Martha Shoffner and former state Sen. Paul Bookout. Former Lt. Gov. Mark Darr also was found by the state Ethics Commission to have used campaign money for personal expenses, but no charges — state or federal — have arisen from that. Darr resigned the office amid the scandal.

UPDATE: Following is the U.S. Attorney’s release on the case:

Christopher R. Thyer, United States Attorney for the Eastern District of Arkansas, along with David T. Resch, Special Agent in Charge of the Little Rock Field Office of the Federal Bureau of Investigation (FBI), announced today that Bruce Pennington, age 64, of Fayetteville, Arkansas, the former Saline County Sheriff, pleaded guilty to a one-count Information charging him with wire fraud for using money from his campaign account to pay for personal items and expenses charged to his Sheriff’s Office Visa card.

Pennington held the office of Saline County Sheriff from 2008 until he resigned on October 1, 2013. At his plea hearing in open court on August 3, 2015, before U.S. District Court Judge Kristine G. Baker, and in his plea documents in Case No. 4:15CR00132 KGB, Pennington admitted the following conduct:

During the Saline County Sheriff’s elections in 2010 and 2012, candidates for county office were required by Arkansas law to 425 West Capitol Avenue, Suite 500 (501) 340-2600 Post Office Box 1229 Little Rock, Arkansas 72203-1229 file Campaign Contribution and Expenditure Reports (“CCE reports”) with the county clerk to evidence compliance with campaign finance disclosure laws and provide a public record of all contributions and expenditures of a candidate’s campaign. Arkansas Code Annotated § 7-6-203(g)(1) provides, in part, that “a candidate shall not take any campaign funds as personal income.” Arkansas Code Annotated § 7-6-203(g)(4)(A) provides, the “a candidate who uses campaign funds to fulfill any commitment, obligation, or expense that would exist regardless of the candidate’s campaign shall be deemed to have taken campaign funds as personal income.” Campaign funds may not be used to pay personal expenses. Personal expenses include household food items and supplies, clothing, mortgage, rent, or utility payments, among other items.

PENNINGTON converted contributions for his 2012 and 2014 campaigns to his personal use and profit, and concealed his conversion of campaign funds from the public, the county clerk, and law enforcement authorities. More specifically, PENNINGTON filed CCE reports for the 2012 campaign on or about May 12, 2012; July 2, 2012; October 30, 2012; and December 31, 2012, with the Saline County Clerk. PENNINGTON withdrew from the 2014 Saline County Sheriff’s race before CCE reports came due. In those reports, which were available to the public, including contributors and prospective contributors, PENNINGTON represented that the contributions received were used to pay for campaign related expenses and that all expenditures of campaign funds had been reported. These representations on PENNINGTON’s CCE reports were false. In fact, PENNINGTON issued checks and withdrew cash from the campaign account to pay for personal items and expenses.

The checks written by PENNINGTON from the campaign account to pay for personal items and expenses charged to his Sheriff’s Office Visa were written to “Visa” and delivered to a representative of the Saline County Sheriff’s Office. That representative deposited those checks at First Security Bank, Benton, Arkansas. First Security Bank in Benton, Arkansas, then wired those funds to Visa’s account at Wells Fargo Bank in Tampa, Florida.

On or about January 1, 2013, PENNINGTON charged $231.67 in skin-care products to his Sheriff’s Office Visa. On or about January 30, 2013, PENNINGTON wrote a check for $231.67 from his campaign account to Visa and delivered this check to a representative of the Saline County Sheriff’s Office. That representative deposited the check at First Security Bank, Benton, Arkansas, which wired those funds to Visa’s account at Wells Fargo Bank in Tampa, Florida.

In the plea agreement, Pennington stipulated to a sentencing enhancement for abusing a position of public trust. The advisory U.S. Sentencing Guidelines also take into account the dollar amount of the fraud and the number of victims involved in the scheme. The plea agreement also provides that the parties will jointly recommend that any sentence of imprisonment will run concurrent with any sentence imposed in Saline County Circuit Court Case No. 63CR-14-313; however, that recommendation, even if made by the federal court, is not binding on the state court.

“Former Sheriff Pennington betrayed the trust placed in him by the people of Saline County,” Thyer said. “Citizens of the Eastern District of Arkansas deserve to know that their law enforcement members are trustworthy, law-abiding citizens and when they are not, they will be held accountable for their illegal actions.”
“Pennington defrauded his constituents by using money donated to his election campaign for his own personal use,” Resch said. “Along with our federal, state and county partners, we will continue to pursue all such political corruption.”

The maximum potential penalty for a violation of Title 18, United States Code, Section 1343 (wire fraud) is up to twenty years imprisonment, up to three years supervised release, and a fine of up to $250,000. Judge Baker will set a  sentencing hearing date after a Presentence Investigation Report has been completed.

The case was investigated by the Federal Bureau of Investigation’s Ark Trust Public Corruption Task Force. It is being prosecuted by Assistant U.S. Attorney Julie Peters, in cooperation with Faulkner County Prosecuting Attorney Cody Hiland who is serving as a Special Prosecutor in in Saline County Circuit Court Case No. 63CR-14-313.