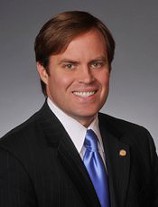 The Arkansas Democrat-Gazette’s article on approval of the wording of a new term limits amendment included quotes from Republican Sen. Jon Woods, architect of a recent term limits extension, that illustrate the emptiness of his so-called “ethics” initiative.

In 2013, Woods grafted a term limits extension and a scheme for an unaccountable legislative pay raise onto Rep. Warwick Sabin’s proposed constitutional amendment to end wining and dining of legislators by lobbyists. Woods’ improvements gave functionally unemployed government parasites like himself a 16- to 18-year run in a single chamber of the legislature — time to accrue enormous power — and has also now given him a 150 percent pay raise through an independent commission on which legislators have only light fingerprints.

But wait, there’s more. That “ethics” provision proved a sad sham. Through a “scheduled event” loophole Woods wrote into the amendment with connivance from lobbyists, special interests paid for breakfast, lunch, cocktails and dinner most days of the legislative session. Legislators lapped it up.

So I had to laugh when I read these quotes from Woods in the Democrat-Gazette:

* LEVEL PLAYING FIELD:  “The reason why the term limits qualified to be part of an overall ethics package was because we were trying to balance positions being elected by the people so they can be on a level playing field with the lobbyists and the bureaucrats. You have bureaucrats and lobbyists doing circles around the lawmakers in Little Rock.”

NOTED: Lobbyists are still running circles around lawmakers, typically after first dropping some checks in their campaign accounts or those of their leadership PACs. It’s rare to find a piece of legislation that doesn’t have a lobbyist behind it, shaping it for maximum advantage of a special interest. Woods’ extension of term limits only gives those with particularly close ties to the lobby more power to get the special interests’ will done.

* SPEEED:  “This particular ballot measure [a proposal to limit time in legislature to 10 years] is very, very radical and irrational,” Woods said. “I’ve never seen a ballot measure, so quickly, try to undo what the people voted on.”

NOTED: Get me the smelling salts. Voters passed the “ethics” amendment in November 2014. In the legislative session that began two months later, Woods “fine-tuned” the voters’ work with several stinky amendments. One opened the door for lobbyists like Ted Mullenix and Gilbert Baker to be camp followers at legislators’ out-of-town junkets, such as the recent  Koch Bros.’ ALEC confab in San Diego. There, they may legally fete them with fancy steak dinners away from the prying eyes of the people back home. It took two months for Woods to further wreck the” ethics” amendment. The new proposed term limits amendment, just approved for the ballot, will require a petition drive and a vote and not take effect, if passed, until 2017. Note, too, that Woods’ handiwork allows the Arkansas legislature  to tamper at will with the “ethics” amendmen by a simple majority vote. Ballot initiatives normally require extraordinary majorities for changes.

Yes, I used to say what House Speaker Jeremy Gillam told the D-G. Term limits are an infringement on democracy by imposing an arbitrary limit on service. Voters should decide whether to keep or boot a legislator, I used to say. But that was when it was official Republican Party policy to push for term limits. Now that they have an unassailable majority, suddenly they LIKE democracy.

Did I remind you that one of the acts of the new Republican majority was to allow Ted Mullenix and Co. to cook up a corrupt scheme to launder special interest money through the Republican Party to throw Louis XIV-style galas for Gillam and Senate President Jonathan Dismang. This was done, we were assured by Gillam, to cement late-session “bonding” among participants. Meaning, of course, those lobbyists who Woods would have you believe no longer run circles around legislators.