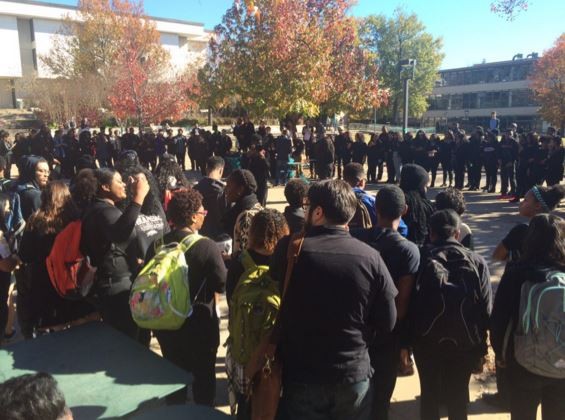 A report on Vox says the racial turmoil at the University of Missouri was forseeable and perhaps inevitable. The deeper message is that the ingredients in Missouri are present across higher education in the United States. See the University of Arkansas, where students will demonstrate today their interest in Missouri events.

Racial injustice exists. Whether coincidental or not, blacks are disproportionately underrepresented in student bodies, faculties and university administration. When grievances arise, social media can amplify them or inspire mass protests quickly. Writes Vox:

The protests against racial injustice could easily spread in a similar way, influencing and amplifying one another. College football players around the country are surely now aware of the power of a potential walkout. And students at Ithaca College, who were already criticizing their president’s response to racial bias on campus, are now asking him to step down, referencing the resignations at the University of Missouri.

This should all be a wake-up call for college presidents, who often seemed caught flat-footed as sexual assault became a national issue. They can’t stamp out, or even punish, every incident of racist behavior. But it’s clear that in the future when students protest, they’re going to need to have a much better answer.

University of Arkansas Interim Chancellor Dan Ferritor, acknowledged this in his campus-wide call for respect earlier this week. It was heartfelt, though some activists found it clumsy. But it WAS something; before rather than after.

Students at UA have joined the movement.

Student organizations on the Fayetteville campus will sponsor an event called “Blackout,” at 1:30 p.m. today on the Union Mall to support the University of Missouri and draw attention to campus racism. Participants will wear black clothing.


“We want people to know what’s going on,” McCall said. “Racism is not dead. If you ever go onto Yik-Yak, you’ll see terrible things people have to say about black people and other non-white races.”

Takama Statton-Brooks, the director for residence education in University Housing, sent an email to all resident assistants about the event.

“Please know University Housing encourages open dialogue on issues of importance to you as individuals,” Statton-Brooks said in the email. “I encourage you to show your support for any cause you believe in, and trust you will conduct yourselves in a manner of respect and civility.”

The UA campus in Fayetteville counted 1,334 African-American students, or 4.98 percent of a total enrollment of 26,754 in this fall. The percentage is higher in the two biggest revenue sports. The population of Arkansas is about 15 percent black, but it is not uniform across the state. Northwest Arkansas, home to the UA, has a much smaller percentage of blacks.