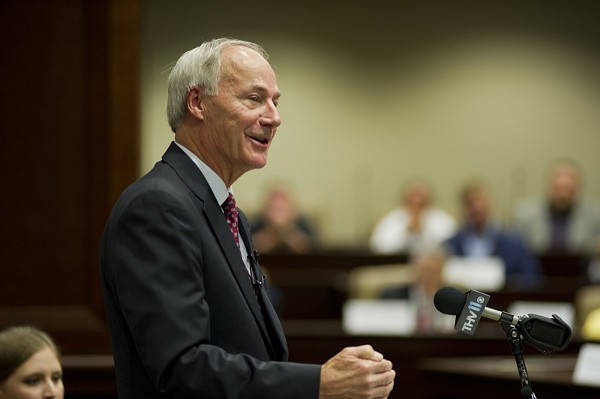 Gov. Asa Hutchinson is set to meet with officials from the federal Department of Health and Human Services (HHS) today to negotiate revisions to the private option, the state’s unique version of Medicaid expansion. The governor outlined what he’ll be asking for in a letter to HHS Secretary Sylvia Burwell last month.

Let’s look at the governor’s big four asks — what they mean in terms of policy and what to expect in negotiations with the feds.


What it means: This is a convoluted scheme impacting private option beneficiaries who get offered employer-sponsored insurance (ESI) at their jobs. The private option covers anyone who makes less than 138 percent of the federal poverty level (that’s around $16,000 for an individual or $33,000 for a family of four). That includes some low-wage workers, and in some cases their employers may offer ESI. Right now, someone in that situation would typically prefer to enroll in the private option instead of the plan offered by their job because the private option has no premiums and little to no cost-sharing.

Hutchinson’s idea is to force low-income workers in this situation to go on their ESI plans rather than enrolling in the private option. Crucially, Medicaid would pay for the difference in premiums and cost-sharing, and cover any Medicaid benefits not covered by the plan. So from the perspective of the beneficiary, the coverage would be just as good.

The administrative complexity here boggles the mind and it’s not clear what this is supposed to achieve, other than an abstract notion that getting insurance through a job is good and getting a job through a public program is bad. The main practical impacts in terms of coverage and access to care: potential hassles for beneficiaries churning between plans if they gain, lose, or shift employment.

It could save Medicaid money, because employers would be pitching in for part of the costs of these plans (as opposed to the private option plans, entirely paid for by Medicaid). But those costs would be borne by businesses (like, say, Walmart), so it’s a politically odd maneuver.

What will the feds say? As long as the state assures the feds that beneficiaries will get the same coverage and benefits under this scheme as they would in Medicaid, the feds should be on board.

What it means: The key word here is “referral.” Hutchinson has stated that he would like to require that beneficiaries have a job, but that has been a clear line in the sand for the federal government, which will not allow states to mandate employment as a condition of eligibility. The feds have been more flexible on work encouragement (a letter to state officials in Utah stated that while work requirements were a no-go, “encouraging work is a legitimate state objective”). Hutchinson’s reference to “continued discussion with the administration on the need for specific work requirements” is a signal both that he will make a show of asking and that he hopes to revisit this issue with a future administration.

In the near term, then, what Hutchinson envisions here in lieu of requiring that beneficiaries get a job is mandating that DHS officials refer unemployed or underemployed beneficiaries to job training programs. Depending on how it’s structured, that could be a good thing! In a lot of cases, low-income Arkansans who are hunting for a job may be unaware of existing resources. That said, the devil is in the details here. What happens to beneficiaries who fail to participate in work referral programs? The governor, when asked whether beneficiaries would be required to participate, said “We’re going to ask for as much requirement as we can. We’ll see what we can wind up with.” One potential route is to make the premiums (described below) waivable if beneficiaries participated in the work referral programs. But given that the premiums are envisioned for beneficiaries a little higher on the income scale — so typically already employed — that may not be a relevant tool here.

The governor also suggests enhanced benefits (vision, dental) that are not normally offered by Medicaid if beneficiaries comply with best wellness practices, such as visiting a primary care doc shortly after enrolling and following that doctor’s instructions on healthy behaviors.

Like all of these schemes, the questions on work referral and wellness will be whether the additional bureaucracy and administrative complexity actually produces measurable impacts in terms of the policy goals.

What will the feds say? Hutchinson should be able to come up with an agreement on work referral and wellness incentives with the feds. The one sticky issue will be if Hutchinson tries to impose some sort of negative incentive or punishment on beneficiaries who don’t participate in the work referral programs. That’s a bit further than the feds have been willing to go elsewhere.

What it means. Hutchinson wants at least some poor people covered by the private option to pay premiums. The premiums will be small but could represent significant monthly expenditures for families living paycheck to paycheck. Hutchinson suggests 2 percent of income (equivalent to the allowable cost-sharing for lower-income, subsidized consumers shopping on the Obamacare Marketplace). Right at the poverty line, that’s around $20 a month for an individual or $40 a month for a family of four.

The details here are fuzzy. Hutchinson clearly wants beneficiaries above the poverty line to pay premiums. But would these premiums apply to all beneficiaries above the poverty line, or would they be waivable if beneficiaries complied with wellness (or work referral) programs? And here’s a bigger one: what would be the consequences for those who failed to pay? Hutchinson has previously suggested a punitive six-month “lockout,” barring beneficiaries from getting back onto coverage if they failed to keep up with premiums. That idea, which might be rejected by the feds and was controversial among state legislators, is unmentioned here, although the governor has been cagey about whether it’s still on the table. If not a lockout, will the premiums be enforceable? That is, will beneficiaries be dropped from the program if they don’t pay? Will there be other incentives, positive or negative?

Meanwhile, Hutchinson also envisions some sort of premium or cost sharing for those who make between 50-100 percent of the federal poverty level. The idea here is that they would be waived if these beneficiaries complied with wellness (and perhaps work referral?) requirements. It would be a carrot-and-stick scheme: beneficiaries who failed to follow best wellness practices would be slapped with premiums; those who did comply would get extra benefits (dental and vision).

I’m a broken record here, but the risk with all this stuff is additional bureaucracy and administrative complexity, with questionable results in terms of policy goals. Obviously, the use of premiums also means squeezing dollars out of folks that don’t have much to spare, and depending on the way it’s structured, that could threaten access to care.

What will the feds say? If the governor has abandoned the “lockout,” they shouldn’t have too much trouble coming up with an agreement. Other states have gotten enforceable premiums above the poverty line, as well as non-enforceable premiums below the poverty line (by “enforceable,” I mean that beneficiaries can be kicked off of coverage if they fail to pay; in the non-enforceable schemes, there are typically other incentives not directly tied to eligibility).

What it means: Hutchinson is going to try to fancy rhetorical footwork, but the first item on this list is an asset test, which was explicitly banned by the Affordable Care Act for the Medicaid beneficiaries in question. Under the ACA, the Medicaid program determines eligibility for non-disabled children and adults only via family income. Previously, states used to also impose asset tests (property, etc.) on beneficiaries that slowed down enrollment and created headaches for state agencies, a massively inefficient and costly system in place to identify a scattering of beneficiaries with substantial assets. Hutchinson is suggesting the return of all that red tape in order to offer some red meat to GOP lawmakers convinced that there’s a major problem with beneficairies only pretending to be poor to scam the system.

The state’s consultant came up with an end-around to try to dodge the rule against asset tests. Hutchinson acknowledges that asset tests are a no-go for determining eligibility, but instead proposes an “enhanced cost share.” Anyone with a primary residence of more than $200,000, or cash or cash-equivalent assets of $50,000 or more, would be slapped with a fee in order to participate in the private option. The governor doesn’t lay out the details here, but the state’s consultant suggested $100 per month, plus an additional $4 per month for each $1,000 in assets above the amounts listed above. Failure to pay would mean beneficiaries were kicked out of the program.

“Enhanced cost share” is really just a premium. Hutchinson is suggesting imposing an asset test (illegal under Obamacare) and charging significant premiums to people who are income-eligible but have substantial assets. He can call it whatever he wants, but this is an asset test that would exclude eligibility to the program. Offering the program for $100 a month (or more) is not the private option, or Medicaid, at all.

Asset tests were eliminated in the first place because they’re an administrative nightmare, impact a very small group of beneficiaries, and create barriers to access to care.

The next item on this list, 90-day retroactive eligibility, is a reference to the way coverage in Medicaid is structured. Right now, people are covered for services in the three months prior to signing up. This avoids coverage gaps for beneficiaries (and uncompensated care bills for hospitals and providers). Hutchinson wants to eliminate this benefit, so coverage would only start once they signed up. In practice, this amounts to cost shifting from Medicaid to providers and could harm beneficiaries who don’t know about the program until they have medical problems.

The other items on this list are administrative changes regarding how the state could wind down or change the private option waiver, more care management for the medically frail, and ongoing eligibility verification.

What will the feds say? There is little to no chance that the feds will give Arkansas permission to impose asset tests, as the Hutchinson administration has more or less admitted. This is the one clear “no” on their ask list.

Eliminating 90-day retroactive eligibility is not completely out of the question but typically the feds have only granted this when there is some sort of policy reason for a particular state to do this — and when the state can plausibly argue that it will have protections in place such that potential new enrollees don’t end up with gaps in coverage. It’s hard to see how any of that fits with the Arkansas Works framework proposed by the governor.