UPDATE: Ellington has issued a news release saying that Naramore surrendered himself today at the Garland County Detention Center, where he was booked and released on a $5,000 bond. Here’s the press release.

UPDATE II: David Sachar, executive director of the state Judicial Discipline and Disability Commission, said the JDDC will seek a temporary suspension of the judge. It’s a suspension with pay. The suspension would be in place through the disciplinary proceedings, regardless of whether the criminal case ends. It’s standard practice, Sachar said. The JDDC will formally seek the suspension sometime between now and Tuesday, after which the state Supreme Court will consider it.

Ellington had been considering the case for some six months. KARK has details from the affidavit:

*Naramore stated, “My son was left in the car and I think he’s dead.”

*When police arrived, Naramore had taken his son inside their home and was holding him, yelling “No my baby! No my baby!

*Naramore told police the child had been in the car for about five hours.

*Naramore said he and his son said their morning prayers while he drove to work at about 8:15 a.m., stopping at McDonald’s on the way.

*Naramore said he had a court case he was worried about and went to work as he did each day. He got off work early, ran some errands and went home. As he was leaving his home to pick up his son from daycare, he heard a noise in the back seat and saw the child still in his car seat and had not been dropped off to daycare.

*Naramore said he immediately stopped the car, got Thomas out and called for help. 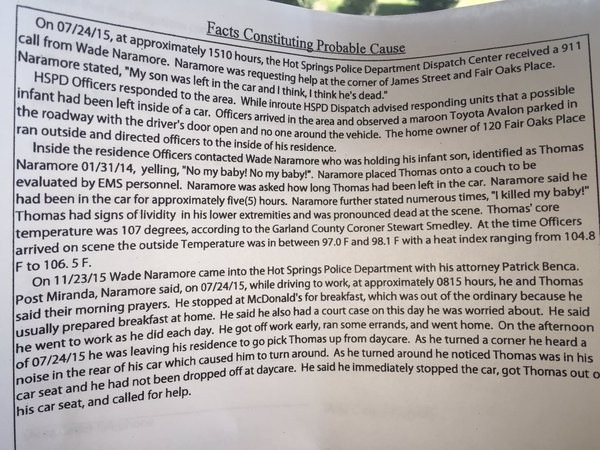