The Republican State Leadership Committee, a 527 group based in Washington, is launching ads against Little Rock lawyer Clark Mason, who is running for an Associate Justice position on the Arkansas Supreme Court. The mailers support Mason’s opponent, Circuit Judge Shawn Womack, a former Republican legislator from Mountain Home.

“Elect conservative Judge Shawn Womack to the Arkansas Supreme Court … and keep Clark Mason’s Obama-style liberalism away from our courtrooms,” the mailer urges.

Mason, it says, is the “former Arkansas boss of the liberal trial lawyers lobby, which supports and donates thousands of dollars to liberal democrats [sic], and Mason himself has donated thousands of dollars to DC liberal democrats [sic] like John Edwards and Tom Daschle.” It also says Mason, “admits his support for Obama’s executive actions that kill Arkansas jobs while making trial lawyers rich.” No context or explanation is given.

Meanwhile, Womack is “pro-life, pro-family, and in-touch with the people and values of our state.”

A small label on the back of the mailer identifies the funder as an RSLC arm called the Judicial Fairness Initiative. Its website explains the initiative’s purpose like this:

Too often voters are starved of information about judicial candidates up for election and forced to vote completely in the dark. To address this critically important need, JFI will provide the public with a balanced flow of relevant information to make educated decisions and support common sense conservative judges at the state level.

Get angry. Is this how you want your judiciary to be chosen?

One technical point: The RSLC is not a “dark money” organization like the Judicial Crisis Network, the nonprofit that’s bought well over half a million in TV ads to attack Justice Courtney Goodson in the race for chief justice. Politically motivated 501(c)4 nonprofits like the Judicial Crisis Network are called “dark money” groups because they don’t have to disclose their donors; they’re also limited in what they can spend money on. In contrast, 527s like the RSLC are explicitly political organizations, which is why this ad is able to be so direct in its endorsement of Womack over Mason. (Here’s Open Secrets for more on the distinctions between different species of advocacy groups.)

In the parlance of ethics law, this pro-Womack ad is “express advocacy” — it tells voters who to choose in the election, directly. The attack mailers going after Goodson are not express advocacy; they don’t tell you how to vote, only that she’s horrible, terrible, wretched, etc, and that you should call her up and tell her so. 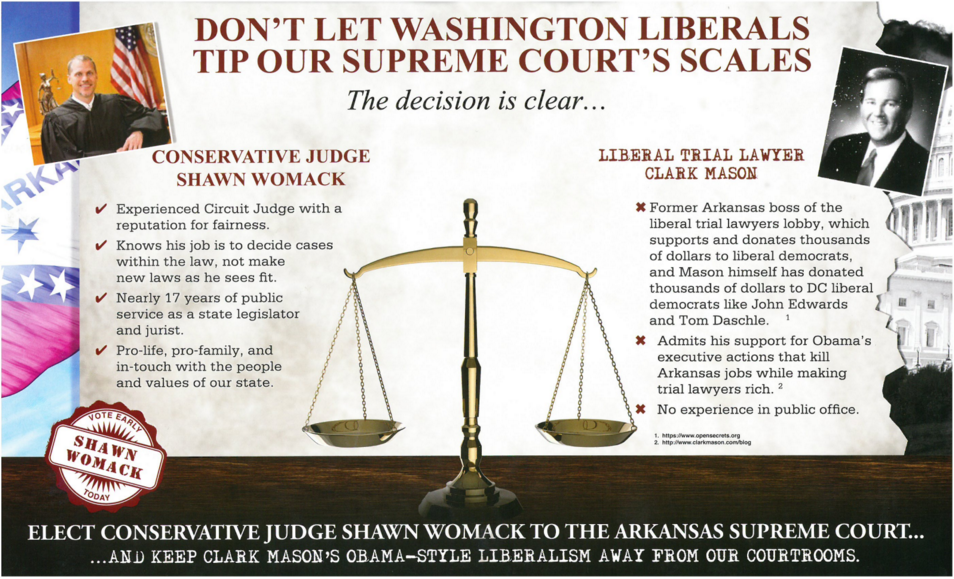