A month after the conclusion of a vitriolic state Supreme Court election season that saw unprecedented levels of spending by out-of-state “dark money” groups, the Senate Judiciary Committee this afternoon discussed two potential reforms to how Arkansas selects its judges.

Gov. Asa Hutchinson has floated the idea of appointing appellate judges, rather than electing them, an idea also embraced by Judiciary committee chair Sen. Jeremy Hutchinson (R-Benton), the governor’s nephew. It may always be a tough sell to change an elected position to an appointed one, but the argument makes some sense. Considering the low level of voter information about appellate court races, and the recent influx of high-dollar, anonymous advertising to influence those voters (often with misleading information), an appointment system genuinely might be cleaner.

Meanwhile, Rep. Clarke Tucker (D-Little Rock) is using the issue to forward proposed legislation that would increase transparency in all Arkansas elections, not just judicial races. Tucker’s bill would require disclosure of “electioneering” communications, meaning political advertising made by a group (nominally independent of any campaign) that skirts regulation by avoiding narrow phrasings such as “vote for” or “vote against.” Right now, donations made to independent expenditure groups that buy electioneering communications are not disclosed in Arkansas, keeping voters in the dark about who’s funding the ads — thus the term “dark money.” A number of other states now regulate electioneering communications during campaign season because they recognize that even if the ad doesn’t explicitly say to vote for a candidate, a politically motivated ad is a politically motivated ad. Tucker had a similar proposal shot down in 2015, but unhappiness over the recent Supreme Court races might motivate legislators to act.

Among those who testified was Supreme Court Justice Karen Baker. While she was not representing the court as a whole, she said, “I will say the court is very aware, and our entire judiciary is concerned about this issue.” As far as disclosure, Baker pointed out that it’s uniquely important to know who funds judicial elections, considering “recusal issues.” If a judge assigned to hear a case has received substantial campaign donations in the past from one of the parties in the case, he or she should recuse. But what if the judge has been the beneficiary of a $300,000 ad buy from an outside dark money group that happens to be funded by one of the parties in the case?

“It’s not really the public’s right to know so much as it is the litigants’ right to know when they appear before the court. … [They] wouldn’t even know to ask for a recusal if there is no transparency,” Baker said.

Baker indicated she wasn’t a fan of the idea of appointing judges. Instead, she suggested a new system of public financing — or “attorney financing,” as she put it — in which lawyers in the state pay an additional surcharge on license fees, which would pay for the campaigns of judicial candidates who agreed to certain spending limits. She suggested an additional $150, on top of the current $200 license fee.

Because of the U.S. Supreme Court’s Citizens United decision, she said, “We can’t do matching funds to match dollars spent by independent expenditure groups. We don’t have the funds to do that, and the [U.S.] Supreme Court has said that is not a viable option. However, we can have a public finance system, and we can have our candidates agree to certain practices within their campaigns to qualify. … That could be done by court rule and would not require legislation.”

Rep. Tucker then presented his bill. “Nothing I propose would seek to regulate the content of what anybody says, or how much anyone spends,” he said, also invoking the precedent set by Citizens United, which said political spending was protected under the First Amendment but left the door open to greater transparency regulation. “All it does is it makes you sign your name to it, so to speak … so it’s not anonymous. … It’s meant to close what is, in my opinion, a gaping loophole.” Tucker compared spending by dark money groups to the hateful tone of anonymous Internet comments, “but instead of it being on a message board with no impact on anything … it affects elections in Arkansas.”

“The big picture question is whether you think this kind of advertising is good for Arkansas …  and whether the people of Arkansas have a right to know who’s buying the election outcomes in this state,” Tucker said.

Bob Edwards, president of the Arkansas Trial Lawyers Association, spoke in favor of the bill. Unreported spending by independent groups, he said, “is the greatest threat to our freedom in this country today.”

Arkansas Bar Association president Eddie Walker declined to take a position either on regulating electioneering communications or on appointing judges. But, he said, “anything that distracts from a fair and impartial judiciary attracts our interest. … I’ve appointed a 17-member task force … comprised of a number of different lawyers with different perspectives” from around the state, including judges, with the hopes of making recommendations to the legislature in 2017. (However, Tucker and other Democrats are hoping to make the changes to electioneering law this year.)

Representatives from three conservative organizations lined up to speak against the premise of Tucker’s bill: Dan Greenberg of Advance Arkansas, Jerry Cox from the Family Council, and Teresa Oelka and David Ray from Americans for Prosperity, the 501(c)4 heavily funded by billionaire donors Charles and David Koch.

Greenberg argued that individual donations made to political causes should be kept private. “I think it’s dangerous to start talking about how we don’t need to respect people’s private choices and private actions,” he said.

Sen. Hutchinson pushed back. When it comes to judicial elections, he said, “I am not satisfied with the status quo.”

“You look at the last three Supreme Court races, and unreported money has come into all of them, and as [Bob] Edwards said, it’s 3 and 0.” (In addition to the two races this year, in which both of the candidates supported by dark money ad buys won handily, a Supreme Court race in 2014 was also marked by an infusion of outside cash to fund sleazy attack ads — again, successfully.) “Under our current system, when [judicial] candidates can’t run under a party label … [and] can’t speak on any [political] issue,” even politically engaged voters know next to nothing about the people running for the courts. “It really comes down to a name ID contest,” Hutchinson said. At the federal level, he pointed out, presidential candidates have to answer questions about what sort of justice they’d support to the Supreme Court, giving voters a more informed voice.

Oelka, of Americans for Prosperity, said activists from her organization have been the victim of targeted harassment and death threats from “progressive organizations” and “government.” (She cited incidents of union members clashing with AFP members over right-to-work legislation in other states.) David Ray said attempts to require disclosure of electioneering communications were really to “discourage many from participating in the democratic process.”

Comparing the proposed disclosure of donations from billionaires like the Koch brothers to the state of Alabama’s suppression of the NAACP during the civil rights movement, Ray said disclosure has a “chilling effect of deterring individuals from contributing to causes that they support. … Transparency is for government. Privacy is for citizens.”

Hutchinson again pushed back against such arguments, telling Ray that “the biggest issue that I have is the recusal issue, which is for citizen litigants. … We’re talking about judicial races in which someone has a right to ask a judge to recuse … . Unless there is this type of disclosure, that citizen will never have a chance to ask a judge to recuse.”

“Let’s say hypothetically that an oil and gas company had a case pending before the state Supreme Court, and they spent $2.5 million through some group and ran the kind of ads that ran against Tim Cullen, and they win. And the poor citizen who’s up against the oil and gas company can’t ask that judge to recuse. The judge could very well know, but that citizen doesn’t know. This transparency is for the citizen, in this case at least. Tell me how we solve that problem. I’m not saying it has happened, but the potential is there. … Tell me how we solve that if not through transparency?”

“You’re making a fundamental assumption that education efforts equals people buying off a judge in this example,” Oelka said.

Hutchinson responded, “I’m making the assumption that $2 million on behalf of one person, on behalf of the judicial candidate, is buying that candidate? That is correct.” 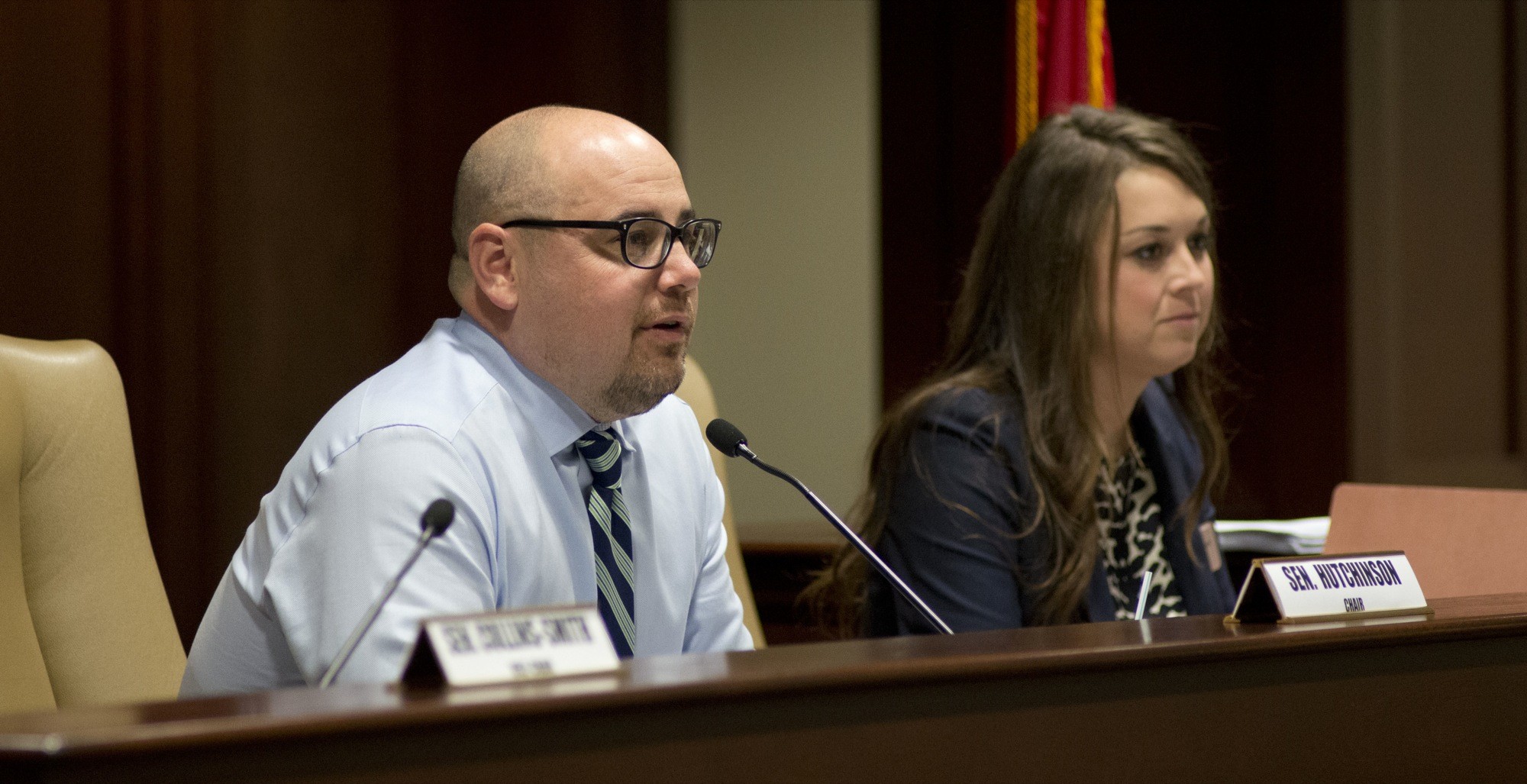