North Carolina Gov. Pat McCrory, in the midst of a re-election battle and facing growing backlash to the state’s new LGBT discrimination law, issued an executive order today aimed at attempting to undo some of the damage. At first glance, it’s not much.

The law in North Carolina, as in Arkansas, prevents local non-discrimination ordinances. It mandates that restrooms may be used only by people whose birth sex matches that of the facility. Arkansas’s putative religious protection law, which Gov. Asa Hutchinson signed, is intended to protect those who impose this same kind of gender discrimination, as well as protect those who want to discriminate in housing, employment and public services on sexual orientation and gender grounds. The evildoers in Arkansas were smart enough not to get too specific — a failing that could ultimately harm, for example, the very specific law in Mississippi.

Arkansas’s legal discrimination laws have largely passed under national press radar, unlike in North Carolina, Georgia and Mississippi. Though the intended effects are precisely the same.

PayPal and Deutsche Bank have scrapped economic expansions in North Carolina as a result of the law, among many negative business and tourism fallouts from the new law.

McCrory issued an executive order today that continued to defend the override of a Charlotte bathroom ordinance protecting transgender people and made mostly cosmetic efforts to improve the state’s battered image. It said, in part: 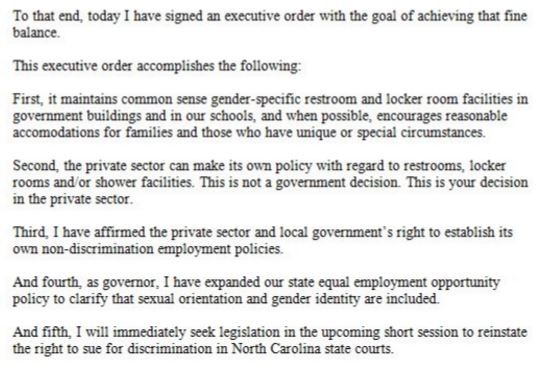 This doesn’t do much. Policy is not law, for one thing. North Carolina law, which provides no protection for LGBT people and prohibits local government from doing so, remains the same. It has never covered discrimination on a sexual orientation basis, so even the promise of reinstating the right to sue isn’t much, except where private businesses could be accused of violating stated non-discrimination policies of their own.

He IS feeling the heat, as the governor of Georgia did. Mississippi, for whom Arkansas must still thank God, is utterly shameless. That, by the way, is the subject of a good column by Ernest Dumas who reminds of the dark days when a religious pretext was used to justify another type of invidious discrimination once defended to the limit in Arkansas and the rest of the South. Talking about race, of course.

Bless her heart, Mississippi has bested us again and the rest of the South, too, in a predictable venue—enshrining religion-based bigotry in state law. But the Magnolia State has to compete for the world’s attention with states like North Carolina and Georgia with bigger bullhorns than its own or Arkansas’s.

But the Georgia and North Carolina governors grabbed all the attention. Georgia’s, a conservative Republican, vetoed his legislature’s religious liberty bill. “I do not think we have to discriminate against anyone to protect the faith-based community in Georgia,” the old Baptist deacon said. North Carolina’s governor signed a similar bill, earning praise from
many conservatives and vows from the National Football League and national business concerns to avoid the state.

State religious-liberty laws are supposed to pre-empt cities like Little Rock and Eureka Springs that enact their own laws forbidding discrimination based on race, sex or any other human condition. The real purpose of the state laws is to declare homosexuality and same-sex marriage still officially evil in their states no matter what many other state and municipal laws and the United States Supreme Court have decreed.

Arkansas passed a religious-liberty bill last year and Gov. Hutchinson signed it with little fanfare, but we are assured that our version only mirrors the empty slogans in a federal statute signed by Bill Clinton. The Arkansas law may still give you the state’s blessing if you refuse to sell a wedding cake to a lesbian or refuse a transgender person a restroom at your filling station without a birth certificate and a full-body inspection.

Mississippi comes to this gay question with a richer history than the rest of the South. Slogans there are followed by deeds. The state for a long time tried to enforce and advertise religion’s sanction of slavery and then segregation as God’s commandment. At my South Arkansas church in the 1950s we were told about the Curse of Ham. Noah’s grandson and Ham’s son, Canaan, had black pigment (thus, he founded the black race) and was banished by Noah to become a slave, along with all his progeny. See, God intended blacks to be forever inferior and separate.

When the Supreme Court declared separate schools to be unconstitutional, Southern states set up state sovereignty commissions to protect segregation and the freedoms of the faithful. The Arkansas legislature created the sovereignty commission, but Gov. Orval Faubus wouldn’t appoint its members until a lawsuit made him do it. Then he staffed it with do-nothings.

Not Mississippi. The commission’s investigators went to work. One target was tiny Rust College, a Methodist school set up after the Civil War to educate freedmen. Rust’s president, Dr. Earnest A. Smith, had allowed the professors, including two or three known to be gay, and civil rights activists to converge on the campus in the summer of 1964 to organize black voter registration. The commission’s sleuths investigated sexual proclivities on the campus. Its report, the contents of which became public after a judge in 1996 opened its archives to the public, was filled with innuendoes from anonymous sources about rampant homosexuality and just plain old sex among Dr. Smith, his faculty and students.

“Informant No. 3 stated that Smith is a known liar and ladies’ man and it has been rumored that Smith might have other queer sexual impulses,” the report said. Smith had hired “oddballs and homos” and “white beatniks” to teach English and other subjects and to stir up blacks. A female professor was suspected of actually being a man. The commission’s report told the college’s trustees to fire Smith immediately and they complied. He spent the next 13 years in exile as director of human relations for the United Methodist Church of America. Three years after his exile, the great soprano Leontyne Price, whose mother was a Rust grad, returned for the centennial and honored Smith at a concert, which was memorable for her soaring last number, “He’s Got the Whole World in His Hands.”

The commission’s work protecting segregation and religious piety left a stain on Mississippi. The files documented the commission’s complicity in the murder of the three freedom workers at Philadelphia, Miss., and the protection of the assassin of NAACP president Medgar Evers. Mississippi may not have the heart to give the same force to the religious liberty act of 2016.

The late Justice Antonin Scalia, who wrote the opinion upholding punishment of two native Americans for following their church’s ritual of communing with God by inhaling peyote, warned us that allowing people to claim religious piety as a pretext for ignoring or obstructing the law could lead to disobedience of any law. For once, he was right.