Former legislator Mike Wilson, whose earlier lawsuit temporarily ended the legislature’s unconstitutional pork barrel spending on local projects, has filed a motion this week for a summary judgment against the procedure the legislature came up with to make an end-run around the earlier ruling.

I’m biased against pork barreling, I’d be the first to admit. But I think Wilson has made a good argument, after doing some further evidence and legal research following a hearing at which Circuit Judge Chris Piazza refused to enjoin the current practice temporarily.

The ruse is this: The legislature divvies up surplus money for each legislator to spend as he or she directs after the money is sent to  the state’s regional planning and development districts. Wilson, of Jacksonville, sued his area’s distributor, the Central Arkansas Planning and Development District.

The CAPDD has stopped distributing money because Wilson has pointed out it is illegal to do so under the statute that created the regional districts. The districts, by law, are supposed to make grants only when matched by local money, perform audits of spending and dispense money only  after first drawing up a budget. The legislative money is received and spent according to legislative directions, Wilson demonstrates.

And here’s where Wilson’s summary judgment motion really gets good. He’s delved into the e-mail that makes a record of legislators telling the agency how to spend “their” money — $70,000 for each representative and $285,00 for each senator. Constitutional and statutory ins and outs aside, it is plain that money is spent on strictly local projects at the direction of legislators. When done this way by the legislature years ago, the Supreme Court said it was unconstitutional. If the money is laundered first through a regional agency with no say in the spending, does it make it any less illegal? That’s the question for Judge Chris Piazza.

At least one other regional agency has stopped dispensing money because of this suit. Ripe for examination, too, is the Northwest Arkansas planning agency that misspent grant money on a number of dubious projects, according to a state audit. Powerful legislators’ rewards of friends included money for a little Bible college’s buildings and operating expenses and paying some past due bills to a wholesale grocer.

The exhibits attached to the motion for summary judgment are treasure troves. Priceless, too, is Wilson’s description of the grant “review process.”

Before September 2015, individual letters of support were required from each legislator. Now even that written approval is dispensed with as an “administrative nightmare.” Without the legislator’s approval or direction, the application fails. A group of the approved applications are then bundled together and presented to the CAPDD Board of Directors, who are the mayors and county judges of the CAPDD six-county area. In 2015 the Board routinely approved all of the applications as a group unanimously without further examination, in its monthly meetings lasting 15 to 55 minutes. The CAPDD Board has not denied any application presented to it in 2015.

See some excerpts from Wilson’s exhibits for how legislature’s provide guidance: 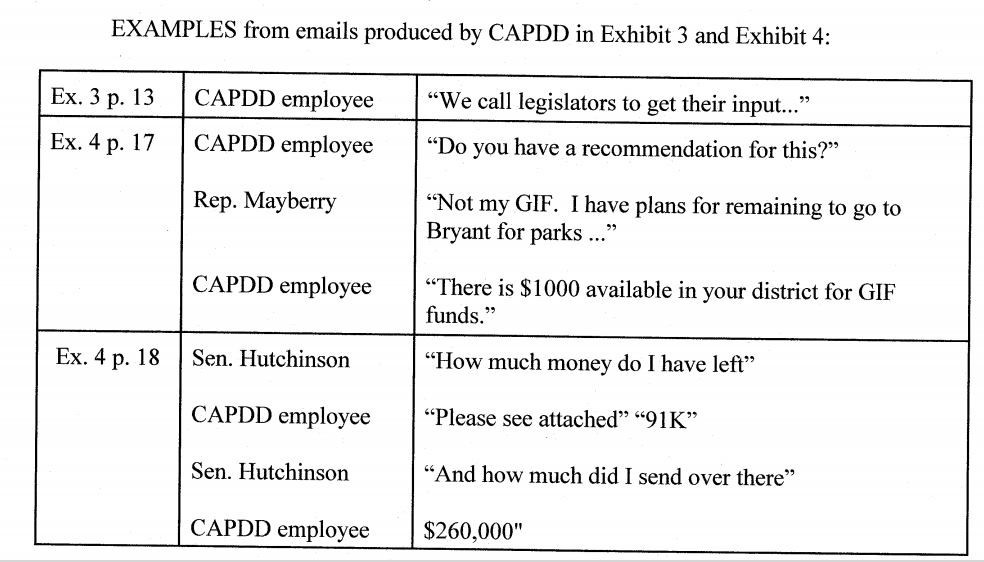 The note below from Rep. Joe Farrer is doubly dubious. Not only is he directing state taxpayer money to local projects — which the Constitution prohibits — he’s directing $2,000 to a private corporation, the Cabot Chamber of Commerce, which is also unconstitutional.

Wilson writes it “cannot be denied” that money is used for local and personal projects with little economic development impact. He compiled an illustrative list, with such items as $9,000 to Sen. Jane English for an Air Force anniversary gala; $10,000 to Sen. Jeremy Hutchinson for basketball and volleyball tournaments; $5,000 to Rep. Joe Farrer for an FFA pole barn; $5,000 to Sen. Linda Chesterfield to purchase dentures for homeless people; $5,000 to Rep. Mark Lowery for a big screen TV for Maumelle; and lots, lots more.

I’ve heard some talk that Gov. Asa Hutchinson wants to put an an end to the General Improvement Fund pork barreling. It’s not only good government to do so, it’s darn near essential if he’s to keep tapping so-called surpluses as a means of diverting general revenues to highways.

The state, by the way, defended by Attorney General Leslie Rutledge, dismisses Wilson’s new filings as immaterial and says he has no standing to sue.

No hearings are currently scheduled in the case.