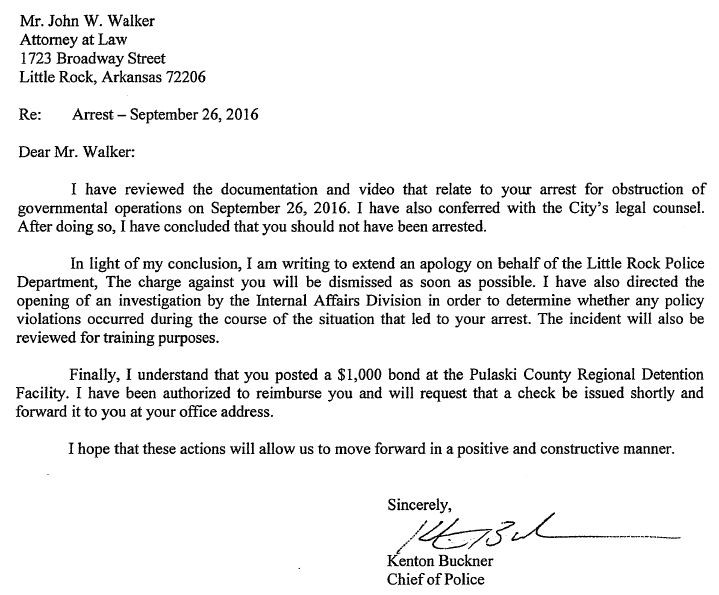 UPDATE: I’ve just learned from City Manager Bruce Moore that the Little Rock police department will formally drop a charge against state Rep. John Walker and send him a formal letter of apology.

CORRECTION: The charge will NOT be dropped, as I wrote originally, against his colleague, Omavi Kushukuru.

A police statement is expected later in the afternoon. When I sought a comment from Chief Kenton Buckner, he said his comments would be limited to the prepared statement. He added:

We have ongoing criminal charges against the other gentleman. Lastly, we fully expect a civil suit from both parties. With that said, we will not be making any other public statements.

The statement that was issued later was terse:

After reviewing Monday’s arrests of John Walker and Omavi Kushukuru on charges of obstructing governmental operations, the decision has been made to dismiss the charges against John Walker. A letter of apology will be issued to John Walker later today. Charges will proceed against Omavi Kushukuru.

An Internal Affairs investigation has been opened into whether any policy violations took place. A review of future training opportunities is also being conducted.

Police also released the letter of apology, shown above, that said the chief had concluded after reviewing video that Walker should not have been arrested. It said the charge would be dropped and Walker would be reimbursed for the $1,000 bond he posted.

According to yesterday’s police report, Kushukuru was arrested first, after he walked between a police cruiser and the car that had been stopped for lacking a license plate. The report placed Walker at the time of his arrest on a sidewalk near the car, but he did not walk between the two vehicles.

Tommy Hudson, president of the Fraternal Order of Police, said he was called to the chief’s office and told of the decision. “He said he didn’t think the arrest of Walker was warranted and he said he was going to talk to the officers involved and explain.”

Hudson said, “I don’t know the whole thing.” He added later, “It’s a mess.” He said he’d seen “bits and pieces” of the video of the arrest and heard officer talking about it. He said it’s possible “there’s a little blame to go around to everyone.”

He said he would stand behind the officers to be sure if there was an investigation, which he expected, that they would be treated fairly and receive due process. But he said it is the right of the chief’s office to overrule an arrest and have a case dropped. He said he didn’t want to make a bad arrest either. “It’s a bad situation for everyone involved.”

Things began moving quickly this morning, with a statement from police that the department was reviewing yesterday’s arrest of state Rep. John Walker and his legal colleague Omavi Kushukuru for obstruction of governmental operations.

Police who’d made a traffic stop that eventually led to the arrest of two men on warrants said tWalker and Kushukuru disobeyed police orders to move away from the car of the men arrested. Walker was filming the officers and exchanged words with them.

Police have said they will release the patrol car camera that was  operating in the initial traffic stop. That might provide some visual evidence of how close Walker got to the business of officers questioning and arresting two men wanted on outstanding warrants.

But we know from the police report a couple of things: 1) At least one officer was offended by remarks Walker made in filming the arrest and found him “antagonistic.” I am willing to believe that’s true, but you have a constitutional right to be obnoxious, even to police officers. 2) The officer made a gratuitous comment in the report about a remark Walker allegedly made to someone at the county jail, that he only wanted to pursue a complaint against white officers. This was far removed from the scene of the supposed obstruction. The comment, if it was said, might be offensive to a white officer, but it is irrelevant to a report on that incident.

From the city’s point of view, giving Walker a court forum on the charge couldn’t come at a worse time, while it is struggling with criticism for the fact that most white officers don’t live in the city of Little Rock and that they cite crime and the schools, which are majority black, as the reasons.

Yesterday, my boss, Rep. John Walker, and I were arrested for observing an excessive display of police force. Four police SUV’s and approximately five officers surrounded a single car, in which sat a shoeless man, a wheelchair bound man and a woman, who fortunately was allowed to go home that day. The shoeless man and disabled man were arrested for being black poor people that fell into the debt trap of the endless fines and fees that riddle the local traffic and petty crime judicial system. My boss and I were arrested for being black, privileged and giving a damn about these men and their sister; for not being pacified in our second-class citizenship. Throughout the process, the most cooperative, empathetic and responsible people we encountered were in the cell full of exclusively black men arrested that day who gave us a warm reception during booking. Although I can still hear one of their desperate pleas for food as the deputies had refused to feed him all day in order to send him a message.

Several people have asked what they can do to help us in this time: give a damn. Demonstrate that you give a damn not through your words alone, but through your courageous, collective actions. If you stand with us, then stand up and unapologetically exercise your right to record the police or engage in some other action to combat these rampant injustices.

Jason Roberts, a LRPD police officer, arrested us in your name. He is our employee. We pay his mortgage, we feed his children, our children will provide his welfare as he grows old and lives off his pension. If you are outraged by his actions, then act like the boss you are and demand the LRPD discipline Jason Roberts. Let LRPD know that you will not tolerate Jason Roberts’s bigoted, racist and foolish actions being carried out in your name. Tell Jason Roberts to go back to his community, where surely he wouldn’t behave in such a brutish manner. The time for being silent or insular dissenters has long past.

Commenters noted that Roberts was involved in a police killing that prompted a lengthy examination from The Guardian in 2013. A case over the death was settled.