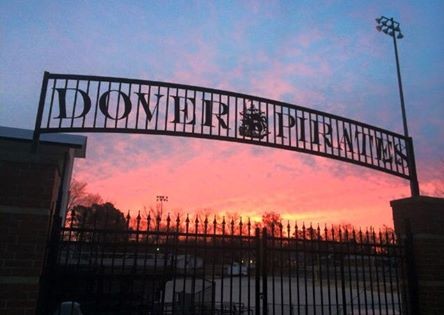 The Dover School District, after getting a complaint from the Freedom from Religion Foundation, finally ended the unconstitutional practice of having a district-sanctioned prayer exercise at football games. They’ve instituted a moment of silence before the National Anthem instead and some in attendance apparently use the moment to chant a prayer aloud.

It’s created quite a bit of squawking, so much so that the school District has removed a post about the change from its Facebook page.  It phrased that decision diplomatically:

Dover Public Schools would like to thank our community for their input on our post regarding prayer at our athletic events. The intention of this post was to provide information. We are satisfied we have achieved this. Due to the nature of some comments we will remove the post.

But …. The conversation didn’t end before a familiar demagogue was heard from. Sen. Jason Rapert was able to get a word in on the issue and — shades of abortion, same-sex marriage, immigration, Muslims and his other hobbies  — he continues to exhibit a misunderstanding of the Constitution of these United States. 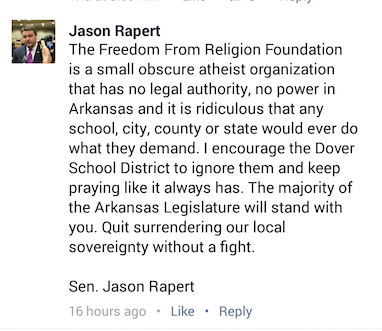 Perhaps the Bully of Bigelow can call the governor and send out the state militia to protect recitation of a prayer over the PA system. From the version of the Bible sanctioned by Bro. Rapert and his Holy Ghost Ministries, of course.