TWELVE DAYS TO GO. And the overnight news was pretty good for those hoping for a Hillary Clinton victory Nov. 8.

Top news is a new Associated Press poll that shows Clinton with a 51-37 lead over Donald Trump among likely voters. That’s big, but there are also other positive signs in measurable support for Clinton among moderate Republicans (who knew they existed?) and important positive findings in the demographics of early voting in such key states as North Carolina and Florida.

Trump’s break from campaigning to drag reporters into his new hotel in Washington, which has had disappointing sales, was taken by some as indication that he’s worried about post-defeat branding more than governing.

All this good news makes me nervous.

There’s still Obamacare, being baldly misrepresented by Republicans. And there’s still Wikileaks. Whether it’s moving voters remains to be seen.

Latest from Wikileaks includes major treatment by the Washington Post and New York Times of e-mail from campaign chair John Podesta’s account (years ago) that illustrates, as the Times put it, how aides had expressed “profound concerns in internal emails about how foreign donations to the Clinton Foundation and Bill Clinton’s own moneymaking ventures would affect Mrs. Clinton’s political future.”

This is mostly about the work of Doug Band, a former Clinton aide and Foundation official, who began a private business that melded Clinton, foundation and private interests.  Noted: It took the Times 20 paragraphs or so before it got around to the Foundation audit that raised questions about Band’s activity and Chelsea Clinton’s important role in severing Band’s connection.

Power struggles and infighting on a political campaign and embarrassing candor about candidates in private e-mail! Of course newspapers should report it, regardless of the illegal provenance.

Imagine if the Russian hackers feeding Wikileaks would also feed some Stephen Bannon e-mails. That would be some spicy reading, even though his candidate, Trump, manages to put enough embarrassing stuff on the record by his own self.

Want a downer? Read how House Republicans are already planning years of Clinton investigations. Over in the Senate, they apparently are seriously plotting to never approve a Clinton Supreme Court nominee.

PS — Here’s another photo from yesterday’s turnout of an estimated 200 voters for Hillary. Yes, it’s Little Rock, which is in Pulaski County. Our hope is that the Clinton vote in Arkansas will at least hit 38 percent or so. 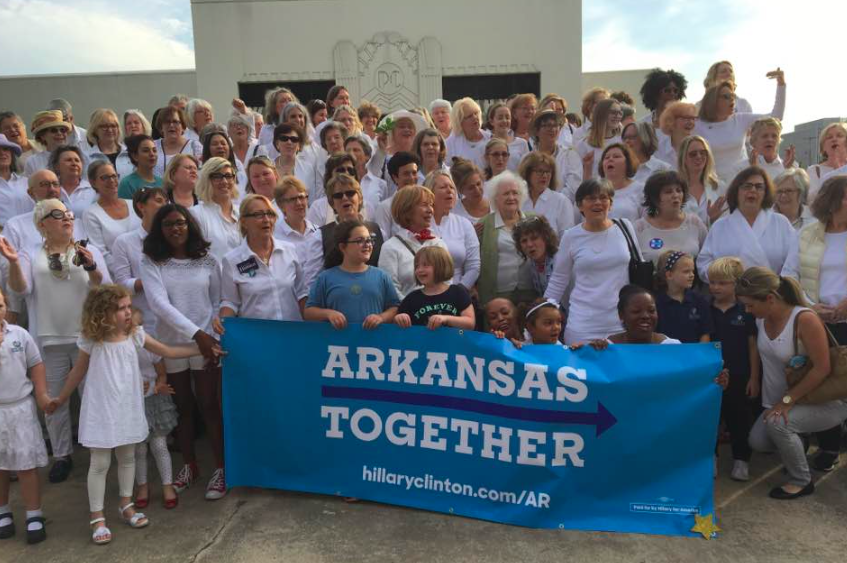