The Arkansas Democrat-Gazette’s Michael Wickline reported this morning that, for the second time in four years, Republican Rep. Mark Lowery had been cited by the state Ethics Commission for failing to comply with campaign finance reporting law.

Lowery this year agreed — the day after he was re-elected —to  a $150 fine and a letter of caution for failure to file seven monthly reports on time.

Got it? A repeat ethics offender can commit serial violations in a new cycle, wait until after the election, pay $150 and all is forgiven, with a “caution.” He also is allowed to say he didn’t know better and that complaints about his failure to follow the law were being used as a “political weapon.” How terribly unfair to cite public official misconduct in a political race!

Lowery’s belief that these were “administrative” errors is not credible, particularly on top of past violation.

Lowery made so many “administrative” mistakes over an extended period that he couldn’t avail himself of the get-out-of-jail free card that legislators wrote into the laughable ethics law. With it, legislators can “correct” errors within 30 days after they are called to their attention.

Some complaints are pending against other scofflaws. In time, they’ll receive slaps on the wrist and the world will move on. Until there are meaningful penalties for ethics violations, legislators need not worry about them too much, particularly since the Ethics Commission rarely initiates investigations, but mostly acts on outside complaints.( You know: People with a political axe to grind.) In one-party Arkansas, with an Ethics Commission controlled by that party, it becomes even less likely a politician will face consequences for ethical misconduct.

Lowery hasn’t filed his final campaign report yet, by the way. His 10-day pre-election report showed a cumulative $41,000 in contributions for the whole race, but the month covered gives you a flavor of the grassroots he serves. Itemized contributions: 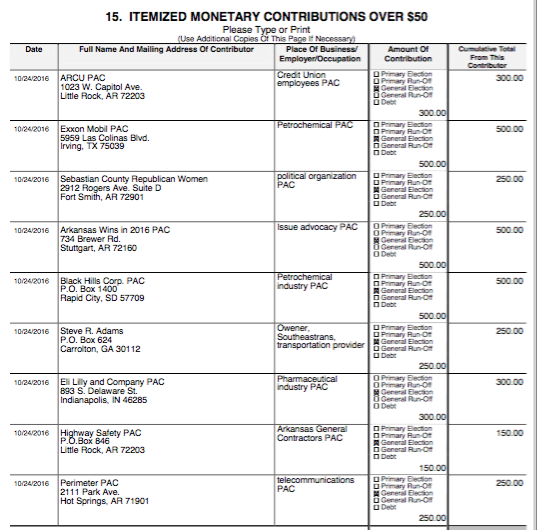 The late primary reports were similarly larded with money from corporate PACs. You know, had the information been available in a timely fashion, somebody might have tried to make political hay of that.