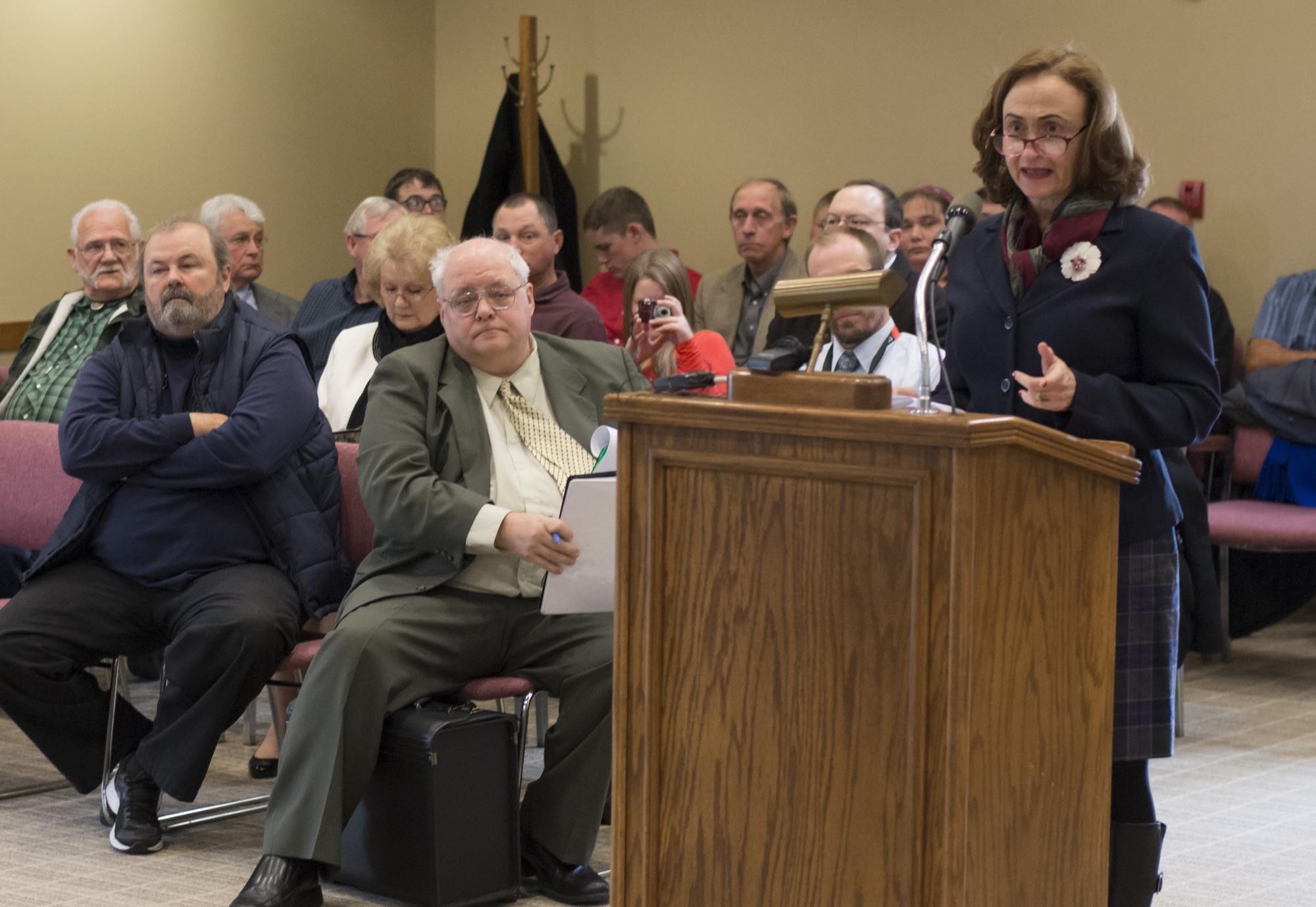 Several dozen speakers signed up to speak for and against the Ten Commandments monument at a public hearing today at the Capitol. David Koon and Brian Chilson will be in with coverage later.

I suspect this is mostly for form’s sake. The legislature authorized the marker. It has been made with private money. Secretary of State Mark Martin effectively controls the commission that oversees placement of monuments on Capitol grounds. I expect the project to be approved — and for competing ideas spawned by the veneration of religion on state property to be disfavored. Then, when Martin moves to carry out the project — and he’s hard-line evangelical, by the way  — a lawsuit will be filed.

Testimony today about the religious nature of the monument might prove useful in the lawsuit, however.

Sen. Jason Rapert, batting cleanup as sponsor of the religious display, seemed to indicate there was nothing to debate because it was a matter of law. Rapert always forgets that there are three branches of government. One of them is nominally in place to enforce the Constitution when the legislative branch ignores it. That happens in Arkansas.

UPDATE: A colorful and at times contentious public comment meeting unfolded today over the proposed Ten Commandments monument, culminating in Tony Leraris, an architect who serves on the three person subcommittee determining a location for the monument, exasperatedly telling a speaker that the legislation as passed in 2015 makes the monument a done deal other than where it is placed. That led some in attendance to ask whether they had wasted their time and effort in coming to speak to the subcommittee.

The number of speakers who signed up for public comment today were about about evenly split between pro and con, though most of those in favor of the monument simply stood to say that their comments had been presented in writing as part of a packet of 355 letters presented to the committee by Northwest Arkansas pastor Lonnie Burks, who spoke. The panel limited comment to three minutes per person, though speakers were allowed to sign up for multiple spots.

Those who spoke in opposition to the monument included several long-time figures in the fight to preserve the separation of church and state in Arkansas, including ACLU Arkansas executive director Rita Sklar, who spoke three times, attorney Anne Orsi, and attorney Gerry Schulze, who again asked the committee to stop the installation of the monument and thus avoid giving him “lots of money” in fees when the inevitable federal lawsuit is decided and the monument is taken down.

The most colorful comments, however, came from rank-and-file Arkansans, including Robert Walker, who identified himself as a retired state employee who works sometimes as a dog sitter. Walker told the committee that as a member of the Arkansas Army National Guard for 23 years, he was one of those deployed to Louisiana following Hurricane Katrina. Working as a medic, Walker said, he was assigned for weeks to an ambulance driven by young woman, who he called his “battle buddy.” In the course of their deployment, Walker said, he learned that not only had she served in Iraq, she was a Wiccan.

“She deployed to Iraq,” Walker said. “She took a weapon and operated there. She served you, she served me, she protected us from our enemies. She was a Wiccan. Now the people in the legislature have decided to mark the state capitol in a way that I find offensive. It is repulsive, it is offensive, it is slapping her in the face. She served you and me as a combat veteran.”

Toni Rose, who identified herself as with the group America Speaks, spoke in favor of the monument, saying that America is a nation based on Judeo-Christian values.  “You can’t deny the fact that Muhammad was not in the room with the Founding Fathers when they were trying to decide how to create the core values that would guide our nation,” Rose said. “They did not read the Koran as direction for the constitution of the United States of America. I believe the Ten Commandments are as much a historical document to the United States of America as the Constitution and the Bill of Rights.” Editor’s Note: Yeah… about that…

Local musician and Arkansas Times contributor Jeremy Brasher began his statement by asking the subcommittee: “Do you want a Baphomet statue?  Because that’s how you get a Baphomet statue” referring to a competing proposal by the Satanic Church to install a huge statue of the goat headed god if the Ten Commandments monument moves forward.

Brasher said he’s lived less than a half-mile from the Capitol for almost 25 years. He said that Little Rock is racially, economically, politically, culturally and religiously mixed, and erecting the monument would show preference for one religion over another. When he talks to friends about the monument, Brasher said, they often ask why legislators who support the erection don’t built it in their own districts.

“Go build it where your base is!” Brasher said. “Go build it where the people who financed this statue live. Go build it on some private ground in Enola, or Conway, Pickles Gap, or Hindsville or Goshen or wherever. Better yet, build it at your church and keep it there, where religious laws should be: at church.”

Sen. Jason Rapert (R-Pickles Gap Conway) spoke, telling the subcommittee that their decision is not whether or not the monument should be installed. It’s about finding an aesthetically pleasing place on the capitol grounds. Rapert said that much of the opposition he’d heard to the monument was “attempt to inject fear and intimidate the commission.” He then quoted from a SCOTUS decision upholding a long-established Ten Commandments Monument on the Texas State Capital grounds, in which Chief Justice William Rehnquist pointed out the numerous depictions of Moses, biblical figures and the Ten Commandments in the Supreme Court building and in Washington. 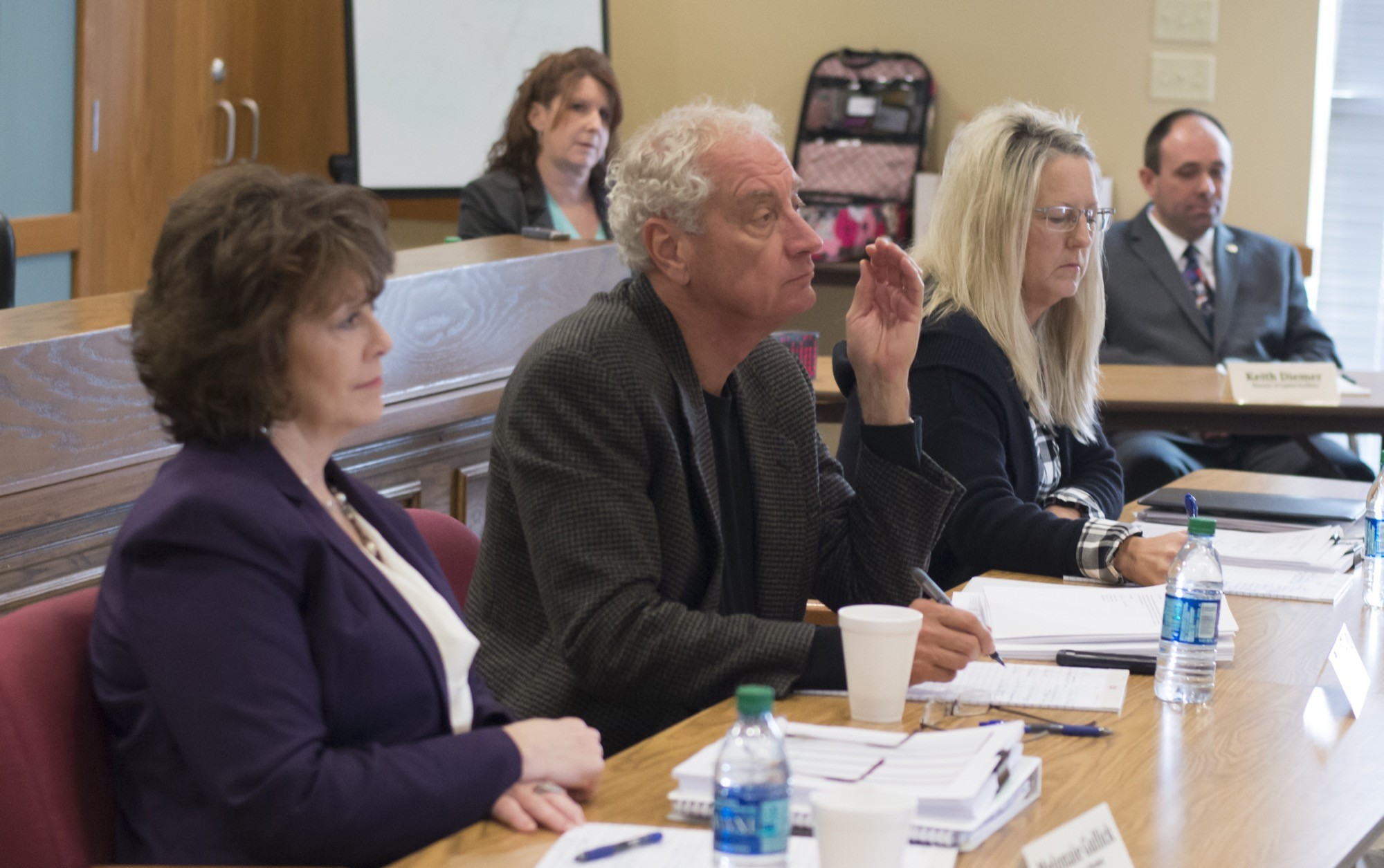 As comments wore on, a speaker who identified himself as Jim Linsley rose to ask the commission what they see as their responsibility, before saying: “I hope you’ll listen to what is logical, what’s reasonable, and what will benefit all of the taxpayers.”

As Linsley left the lectern, a clearly exasperated Tony Leraris, the architect on the subcommittee, called him back, then asked: “Did you not hear what the Senator [Rapert] said about our job? The three of us were appointed to this commission to find a location. We did not vote for this, we did not vote against it. It was done in a prior session it was signed by the governor. The three of us, plus six others are on a committee to place this on the capitol grounds. That is our job. So to sit here and say you need to deny this, you need to deny that, that’s not my job.”

Leraris was asked what the goal of the public comment was if there was no chance of changing the outcome, Leraris said: “Because it is in the laws to have this public discussion, and we’re obligated to show up and listen.” When asked “To what end?” Leraris replied “I don’t know.”

“We are one of nine votes [on the full committee],” Leraris said. “We were appointed on this subcommittee for this purpose. This is our fourth trip down there, this is the public hearing. The granite statue has been proposed to us. We know exactly what it’s going to look like, we know exactly where it’s to be placed on the map, [decided] the last time. So we were asked to come down here for a public hearing. I think we’re going you the time you all are due.”

After more back and forth between Leraris and the speaker, subcommittee member Melonaie Gullnick spoke up to say that it’s incorrect that the hearing was “celebratory,” saying that offering an opportunity for public comment is in Arkansas state law. “Everyone’s comments mean something to us, but we can’t change the law at this point,” Gullnick said.

At that, Little Rock attorney Gerry Schulze came again to the microphone, and reminded the subcommittee that they’d taken an oath to uphold the Constitution.

D. Bruce Hill, of the Arkansas Universalist Unitarian Justice Ministry, a non-profit education and lobbying group, had already spoke, but he came to the lectern and thanked Leraris for his candor. “I thank you for your admission that the time I took to come down here to come down and speak on behalf of myself and others is futile,” Hill said. “It was a waste of my time and my effort.”

“I can believe in the phrase, In God we Trust, because it is not the Christian God,” Hill said. “It is not the Catholic God, it is not the God of the Old Testament, it’s not Yahweh, it’s not Elohim, it’s not Allah, it is not Gaia. I [have] other names for God that I could use. I’m so frustrated right now that all that the passion that people have is wiped out because the state legislature made a command, and you are going through the hoops that you have to go through by the Arkansas State statutes to sit there and listen. All you’re going to do is decide: where is this monument going to go?”

The subcommittee adjourned soon after. They’ll meet to make their final recommendation to the full committee at a later date.