The Medical Marijuana Commission began discussing draft rules for licensing dispensaries on Tuesday. It agreed by a 4-1 vote to initially certify 32 medical marijuana dispensaries across Arkansas — significantly more than the minimum of 20 required by the medical marijuana amendment passed by voters in November. (The dissenting vote was Commissioner Travis Story, who said he preferred the state begin by authorizing a smaller number.)

However, the commission also instituted a licensing fee structure that will make it more difficult for dispensaries themselves to cultivate marijuana.

Although the amendment implies that the bulk of marijuana production will take place at one of a handful of large cultivation facilities, it also allows for individual dispensaries to grow up to 50 “mature plants.” Presumably, that’s a quantity far smaller than what a cultivation facility would normally be producing, but it could allow a dispensary located in a small consumer market some degree of autonomy from the big cultivators. The commission last month agreed to initially authorize five cultivation facilities statewide (the amendment requires four to eight).

The commission decided Tuesday to impose a relatively modest license fee of $2,500 on dispensaries that do not cultivate marijuana — one might call them “storefront-only dispensaries.” If a dispensary does choose to grow marijuana, that license fee grows tenfold, to $25,000. A grower-dispensary is also subject to a higher annual renewal fee of $32,500, as compared to $10,000 for a storefront-only dispensary. (Both will be subject to the same $7,500 initial application fee  — the maximum allowed under the amendment — half of which will be refundable for unsuccessful applications.)

The amendment itself envisions no such dual path for dispensary licenses; it simply says any dispensary can grow up to 50 mature plants. In creating a two-tiered system, the commission was following the lead of the Alcoholic Beverage Control, which is currently creating its own set of rules for enforcement and oversight of the marijuana business. Department of Finance and Administration attorney Joel DiPippa told the commission Tuesday that ABC has decided to ask dispensaries “if they want regulatorily to make that election” to cultivate. (ABC is a part of the finance department.) Cultivation requires its own set of rules distinct from retail sales, DiPippa explained, including security requirements, and so dispensaries that want to grow pot must meet the regulations placed on cultivation facilities in certain respects. The logic of such a “tiered option” is that a storefront-only dispensary that wishes simply to sell marijuana — but not to grow it — wouldn’t have to face the same regulatory burden as a grower-dispensary.

Commissioner Carlos Roman initially suggested a $2,500 license fee for storefront-only dispensaries and a $5,000 fee for grower-dispensaries. But Commissioner Story said that difference was too small, and that commissioners should ask themselves, “Do we want everybody to be growing it or not?” Chairwoman Ronda Henry-Tillman told him that “We don’t get to decide that — the amendment did.”

“Well, we can incentivize it … that’s the decision I think we ought to make, and the discussion we want to have,” Story replied.

Commissioner James Miller worried that a small annual renewal fee wouldn’t sufficiently fund the regulatory duties of the commission and ABC and said the legislature might vote to strip the ability of dispensaries to grow plants at all. “There is a rumor that they are going to file a bill to only let cultivation facilities do cultivation … not dispensaries,” he said. (No such bill has yet been filed.) In the end, Story’s and Miller’s arguments seemed to carry the day, and the panel established a two-tiered system.

The higher regulatory burden placed on grower-dispensaries concerned some in attendance. After the meeting, Jennifer Lewis, who had been an organizer in support of the rival medical marijuana ballot measure struck down days before the election, told a reporter that “$2,500 on a dispensary yearly is reasonable, [but] I think $25,000 on cultivating 50 plants is completely crazy, and a great way to make all these dispensaries go out of business.”

“What’s going to happen is that all of these dispensaries that choose to cultivate aren’t going to make their money back and are going to have to stop cultivating,” Lewis said. “So then you’re just going to end up with these five large-scale cultivation centers, and it’s going to be a big monopoly.  These 50 plants are supposed to be like giving the little guy, the small business owner, a leg up — and serving patients in the community. Now, all of these dispensaries are going to have to go to these big cultivation centers to get their product. It’s going to be the Big Five, and they’re going to be like freaking Walmart or Tyson or whatever.”

During the meeting the commissioners expressed uncertainty about just how much marijuana 50 plants would produce. Henry-Tillman at one point stated that “fifty plants is a lot,” provoking cries of “no, it’s not!” from the audience. Mary Robin Casteel, an ABC staff attorney, told the commission that the large cultivation facilities would likely be growing thousands of plants at once, to put things in perspective.

(Among the many questions, however: What constitutes a “mature plant”? Is it a marijuana plant that’s flowering, or one that’s of a certain size? Could a dispensary grow much larger numbers of “immature” plants, cycled carefully so that only 50 reach maturity at one time? Attorney DiPippa said that “how to define [mature plant] is something that is being looked at by all the agencies involved.”) 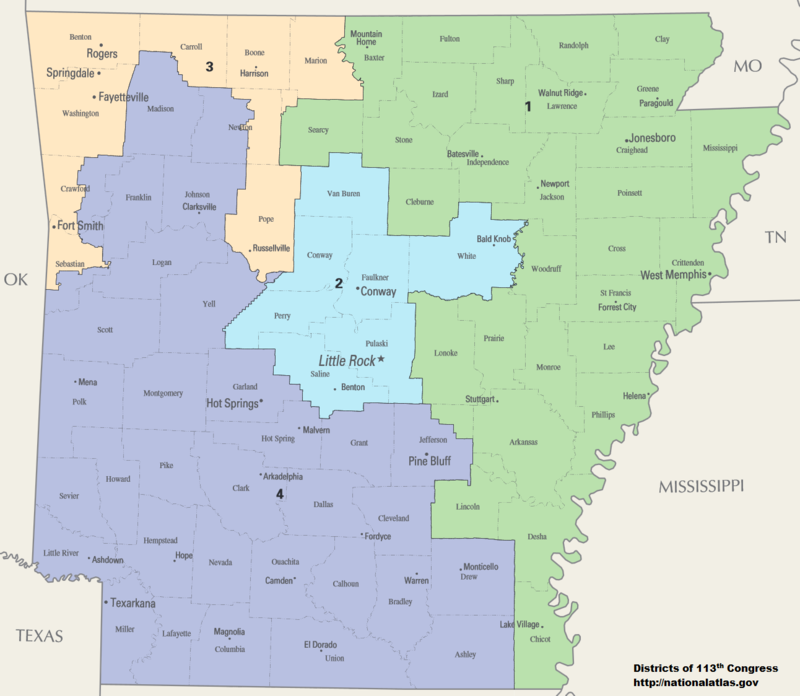 The draft rules propose distributing licenses equally across Arkansas’s four congressional districts — the rationale being that those districts contain roughy equal proportions of the state’s populations by definition. (Here’s a detailed map from the secretary of state’s office.) In regards to geographic distribution, the amendment itself only specifies that no more than four dispensaries be authorized for a single county; it also allows for local “dry” elections, in which a city or county may vote to ban the presence of dispensaries, as some surely will.

Story expressed concern that using such large swathes of the state to determine dispensary placement could leave coverage gaps. “I’m OK with the congressional districts … but you could end up with a huge hole,” he said, adding later that he is working on a map to divide up the state into eight zones, rather than four.

Commissioner Stephen Carroll said, “I’m thinking about the patient access, and how we ensure that these people who have a valid card … can get access. … Are we going to push them to travel some distance every two weeks?” He asked if patients could have marijuana delivered. DiPippa confirmed that the drug can be delivered by a licensed caregiver.

After some debate about how many dispensaries to allow initially — Roman proposed 28, Story proposed 20 — Henry-Tillman made the successful motion to allow 32 in total. That would mean eight dispensaries will be placed in each of the four congressional districts, unless the commission decides on a different method of geographic distribution at a future meeting.

DiPippa informed the commission that it could distribute its remaining allotment of licenses so that they explicitly go towards underserved areas of the state, once it determines initial demand. Story made a motion to add a rule allocating the remaining licenses to such underserved areas, which passed unanimously

At the beginning of the meeting, the commission discussed developing a process and rubric for determining the merit of cultivation center applications. It did not make a final decision on that system. The commission did, however, vote to require cultivators put up a a $500,000 performance bond to be payable to the state in the event that a facility fails initially. That’s in addition to the other steep fees and financial requirements placed on the big growers.