Multiple University of Arkansas at Fayetteville faculty members have told us that they have been warned about legislators monitoring Facebook looking for faculty members who make political posts between 8 a.m. and 5 p.m. (Public servants are prohibited by state law from campaign-related activities — not a prohibition on all political speech or activity — during “usual office hours.”)

“We’ve been getting multiple emails from upper administration and from department chairs that legislators are trolling Facebook,” one told us, speaking on condition of anonymity for fear of retribution. “We’re also apparently only able to call legislators at lunch time, and only on a personal phone, and only at a lunch time that is widely considered the default lunchtime. (This was apparently a negotiated exception, and the use of a personal phone is absolutely vital apparently). Otherwise, we’d be seen in violation of rules constraining the political activity of faculty members at state institutions.”

The faculty member continued: “I’m normally quite driven to use social media as a place to discuss political causes, especially those that impact Arkansas. Overall the effect has been chilling for me.” The faculty member said that people in leadership positions at the university had made these warnings in conversations in addition to emails.

The UA-Fayetteville administration sent out an email — “Reminder About Policies Regarding ‘Political Activity'” — to all faculty and staff on January 27. A copy of the email was provided to the Times in response to a Freedom of Information request.  The email provides links to relevant UA policy about political activity and includes the following text in the body of the email: 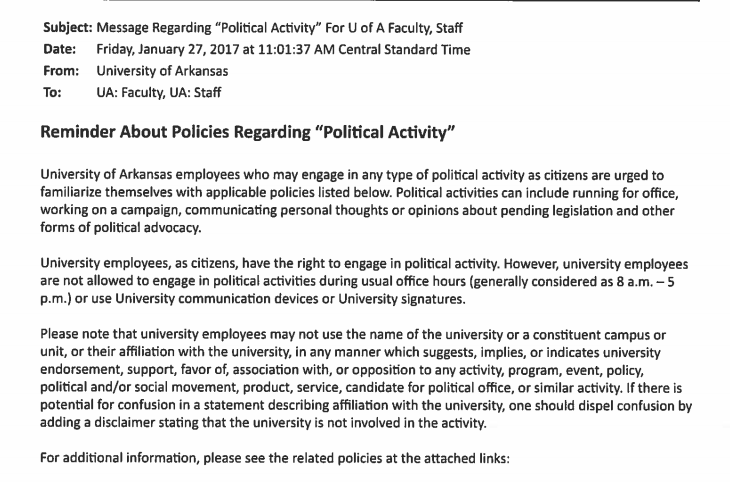 “The intent of the email was simply to remind employees that these policies related to political activity exist,” said Mark Rushing, Assistant Vice Chancellor of University Relations. He compared it to other periodic reminders about policy, such as information about insurance or benefits. “As public employees, as employees at a public institution, we’re held at a different standard than those that might be working at private company or a private enterprise. This was just a reminder of the policies — that’s all it was.”

Unlike state law, university officials say that UA policy, when taken in totality, prohibits not just campaign activity, but “political activity” — such as posting a politically related Facebook message or calling a lawmaker — during working hours. [UPDATE: Even this is debatable; UA System board policy prohibitions arguably could be read as limited to campaign-related activities just like state law; for his part, however, Rushing applied a broader definition to “political activity.” Asked for a clarification, Rushing stated: “Both Board policy and campus policy address ‘political activity’ in general terms. University employees are expected to be engaged in their University duties during the hours they are on duty.”]

However, “usual office hours” is a tricky concept when it comes to university employees. A typical faculty member doesn’t have a 9-to-5 schedule. Rushing told me that it was perfectly fine for faculty members to engage in political activity during their own free time regardless of the time of day. Depending on class and office schedules, that could be at 10 in the morning or 3 in the afternoon or any other time.

“I think there’s been some confusion from some employees regarding what was meant to be a reminder of what the perception might be from some of what usual office hours are,” he said. In other words, while a university faculty member might be on free time on a weekday morning, an outsider might initially be under the mistaken impression that the faculty member was on the clock. So, Rushing said, faculty members might want to consider explicitly stating that they’re on free time if they engage on social media or communicate with a lawmaker during the traditional work day.

“We wanted to make folks aware—on a campus and a higher education environment, people might not think about that,” he said. “So we’re trying to remind folks that, hey, if you are trying making a call at 10 or you’re making a post at 3, or whatever it is, just be cognizant of the fact that the policy says not to engage in political activity during usual office hours. So let them know: ‘I’m off today, I’m at lunch today, my class schedule’s over’ — whatever you need to do to let them know. So there’s no confusion. Because the reality is, if an employee didn’t do that, the message may be lost on the other end because the person’s focusing on whether it’s done under usual office hours or not.”

I told Rushing that if I received the email the university sent out and read the phrase “university employees are not allowed to engage in political activities during usual office hours (generally considered as 8 a.m. – 5 p.m.),” I would take that as a prohibition on activities during that time.

He responded: “The emailed message indicated that ‘usual office hours’ are generally 8 to 5, but did not suggest that such hours are the case for every unit or position. The University strongly supports the right of all employees to be engaged as citizens. …  This was a reminder, not to tell them what their usual office hours were, but to remind them of the perspective of who they may be calling.”

In any case, Rushing stated unequivocally that faculty members could engage in political speech or political activities, regardless of time of day, so long as they weren’t doing so while actually on the job (in other words — teaching class, holding official office hours, in a faculty meeting, etc.).

“That’s completely up to them,” he said. “Any political activity they engage in as citizens — that’s their business.”

Rushing said the email was also intended to be a reminder about other policies related to political activity, such as not using university communication devices or university platforms, making clear that the activity was being done as a private citizen rather than as a representative of the university, not improperly using the university trademark/seal/logo, etc.

I asked whether the university had gotten any pressure or complaints from lawmakers around the issue of faculty or other staff members engaging in political activity or speech during office hours.

“As personal citizens, none whatsoever,” he said. “We haven’t heard from any legislators and there’s been zero pressure. That’s our right as citizens to engage in political activity. … We have had instances where mistakes were made in terms of social media, where an opinion was included in an official University of Arkansas channel. But as far as hearing about it or pressure in terms of folks engaged in political activity as citizens, there’s been none of that.”

Asked whether faculty members might have received email or verbal communications from university leaders outside of the email above, Rushing said, “As far as the university sending message to employees and staff, this was the message. I’m not privy to other discussions around campus.”

For the record, here is what the state law says:

(2) (A) (i) It shall be unlawful for any public servant, as defined in § 21-8-402, to devote any time or labor during usual office hours toward the campaign of any other candidate for office or for the nomination to any office.

(3) (A) It shall be unlawful for any public servant, as defined in § 21-8-402, to use any office or room furnished at public expense to distribute any letters, circulars, or other campaign materials unless such office or room is regularly used by members of the public for such purposes without regard to political affiliation. It shall further be unlawful for any public servant to use for campaign purposes any item of personal property provided with public funds.

Meanwhile, state policy also prohibits “partisan political activity during the hours they are performing work for and being paid by an agency of state government [emphasis mine].”

If legislators are actually trolling Facebook, they may be under the incorrect impression that the law bans all political activity. University policy aside, it doesn’t. It bans campaigning. A public servant who was campaigning for Charlie Collins’ opponent during normal office hours would be violating the law — but there is no legal prohibition on that same public servant speaking out against Collins’ concealed carry bill on Facebook or elsewhere.