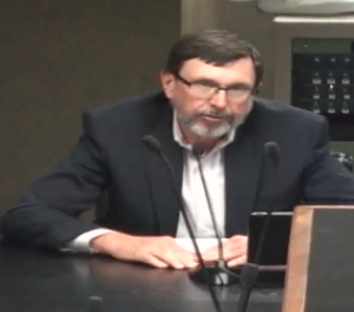 A followup report by Chelsea Boozer in the Arkansas Democrat-Gazette on a Little Rock City Board meeting illustrates sharply the divide in Little Rock over schools.

It turns out that three — and probably four — city directors opposed the resolution pushed by Director Kathy Webb and others to urge state Education Commissioner Johnny Key to consider community impact in closure of Little Rock School District schools, nominally to save money.

Boozer’s original account said that only Director Joan Adcock had voted against the resolution and that Director Lance Hines was absent. But Director Dean Kumpuris said his no vote was overlooked and Director Gene Fortson said he opposed the resolution, too. Their cover for a failure to support the LRSD is that Key already had his mind made up. But their expressions of opposition gives Key comfort that he has support in a divided city.

He can certainly count on Lance Hines, who supported the state takeover of the district. That actionmade Key the de facto Little Rock School Board. Hines didn’t respond to my email of how he would have voted had he been present.

Adcock, Fortson and Kumpuris are at-large directors. It’s not well-understood, but a significant portion of the city is not in the Little Rock School District, particularly the newer western reaches, such as Ward 5, which Hines represents. There’s no love lost in big parts of the city for the Little Rock School District. Adcock is still bitter over the disruption of her high school education by closure of Central High during the desegregation crisis. Her feelings about that are probably represented  by her lack of participation in events marking the 40th anniversary of the crisis and opening of a museum dedicated to the event. Fortson lives in west Little rock and is deeply enmeshed in the business power structure that agitated for state takeover of the school district after its board became majority black. Kumpuris lives in the Heights, but personally was a private school patron. Which is fine, but there are others with different interests.

This is sadly another case where the at-large directors display a mindset insensitive to the inner city of Little Rock. Any day now, I expect them to join in urging voters to support extension of a property tax millage in the district to give more than a half-billion additional dollars to Johnny Key to spend as he sees fit, unfettered by messy democratic concerns. Another voice (and dollar support, too, if a recent Pulaski school election is a guide) will be a lobbyist for the Walton fortune. Key and the Waltons are steadily pushing an agenda to drain more Little Rock District students into charter schools, plus agitating for a high school to serve the predominantly white western portion of the city with the goal of destroying Little Rock Central as a center of academic excellence. All this will create a death spiral for the Little Rock district, thus making it a ripe fruit to pluck for the Waltons’ grand experiment, which was foiled at the 2015 legislative session. They’d make Little Rock an “opportunity” school district. Gone forever would be a real school district with democratically elected leaders. In its place would be a crazy quilt of privately operated charter schools (and ever increasing grants to private school, most likely). They’d be exempt from rules that apply to other public schools, inculding transparency and accountability. The legislature made sure of that again this week by killing charter accountability legislation.

The Little Rock Board of Directors has failed the schools for decades. The four naysayers (I count Hines, because an absence is the same as a no) did so again this week. They eloquently expressed by their votes  whose interests they represent first in the city of Little Rock.

We will rue the day the city isn’t defined by a comprehensive and accountable public school system led by elected representatives. After a couple of years of state control evidence is already abundant — Key’s support for charter expansion; his authorship of a bill forcing school districts to turn over buildings to charters on unfavorable terms, and his refusal to be answerable to the public.

Incidentally, the pro-charter daily newspaper has still not reported on a remarkable legislative committee meeting this week. At that meeting, Key made it clear he wouldn’t back off charter expansion in Little Rock  He opposed a moratorium on new schools during the time of state supervision. The testimony was marked by powerful words from Sam Ledbetter, the Little Rock lawyer who provided the critical swing takeover vote of LRSD. He said he did so with the belief that the state would work to correct problems in the Little Rock School District as quickly as possible, not damage it by huge expansions of charter schools.  He said the state is competing with other schools it’s running, essentially the coach of two teams.

Said Ledbetter of what transpired: “It was shock to me, it was a shock to my community and it was perceived as a betrayal of trust.”


As a supporter of the Little Rock School District who sent two children through a combined 25 years in its schools, I feel the same way about the four members of the Little Rock City Board who lined up this week with Johnny Key. Or, I should say, I feel betrayed. Not shocked.

We need mayor-council government in Little Rock, with all directors chosen by wards. The inner city is otherwise voiceless among the three controlling at-large board members, which is exactly how the chamber of commerce planned it.