The state charter school approval panel is meeting this week and opened today with an application by the Einstein Charter Schools private school management corporation to open a K-8 school for 600 students in Little Rock.

They formally revealed today for the first time what I predicted a week ago: The vacant Garland School building purchased by the Walton Family Foundation for $425,000 earlier this month is the building they intend to use for their charter.

This deal wasn’t announced until it was completed and headed to Education Commissioner Johnny Key for approval. It was never advertised in legal advertising by the district itself. The building was sold a day after the effective date of a new state law giving charter schools first call on vacant school buildings. When this legislation was being discussed, the Waltons were already eying Garland as another charter school site, but nobody mentioned that at the time, including Superintendent Mike Poore, though there was about the fate of some other closed Little Rock schools.

The Waltons wouldn’t say what the purchase was for. The Einstein charter application summary said the location was TBD, to be determined. Poore said he didn’t know. Key wouldn’t comment.

Now we know. And, for a laugh given the secrecy of school siting, consider the protest made by an attorney for the Arkansas Public School Resource Center, that documents presented in opposition to the charter school by Mike Poore hadn’t been provided to him in advance for an opportunity for rebuttal. The APSRC is a charter school advocacy group financed by the Walton Family Foundation. The information was all readily available — improving ACT scores in LRSD, figures showing the excess school capacity and even a map that had appeared in the Little Rock School District showing the cluster of elementary schools in central Little Rock (Einstein intends to open as a K-3 school). Poore also questioned Einstein’s ability to handle 600 students at Garland and wondered about the level of parent interest in the new school. 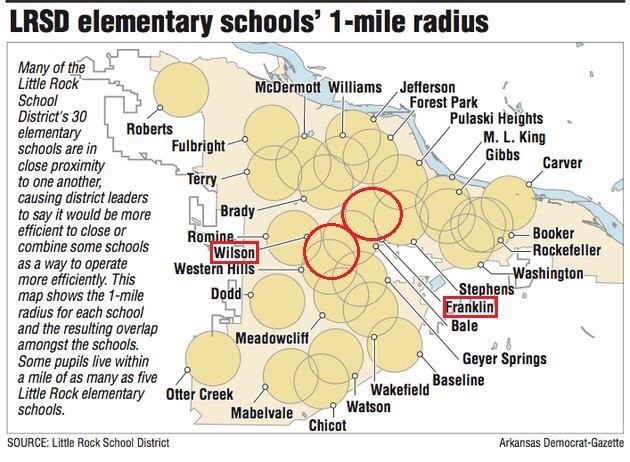 A spokesman for Einstein said the group eventually planned three schools in Arkansas. She slammed the quality of Little Rock schools, particularly Cloverdale Middle, one of those that the Garland neighborhood, but not the only one under a district with school choice and said Einstein had demonstrated success elsewhere with its belief that all children, regardless of background, can learn.

Poore opposed the application. He said the neighborhood around Garland, on 25th Street in Central Little Rock, offers many school options already — public, charter and private and had an overabundance of school seats.  He said the district had made improvement at every grade level in the last year and he said the district “can meet and match” every program the charter school offers. He said Cloverdale had been reconfigured and demonstrated of progress as well.

Approval of the school will cause “great turmoil” in the community, Poore said.  “it’s not a wise choice.”

Some irony that Poore was opposing of Garland for a charter school that he just sold to the Waltons. He finally emphasized in a discussion with the Times yesterday that he had no choice but to sell the school to the Waltons under the new law. He said other interest had been expressed in the property, which was marketed by a real estate firm through commercial channels, but only one bid emerged, from the Waltons. He acknowledged that the situation might have been different had the public known about the potential for the school, as happened with the closure of Franklin, Woodruff and Wilson schools. But he noted, too, that Garland hadn’t been used as a school for 17 years and thus had no built-in support group. He defended then the rising scores of the main elementary in the neighborhood — Stephens — which has shown approvement across the board in the last year.

The school is now taking questions from the panel, recently expanded to include several not department employees — all of them with records of past charter school support.

Poore indicated he would also oppose an application to convert the former Mitchell school on Battery Street to a charter, again in a building purchased by the Walton Family Foundation. It has even more and better school options in the immediate neighborhood.

UPDATE: The panel approved the application unanimously. No member made a mention of the Little Rock School District’s objection to the application. Members said they believed the operators had a good track record.

The cratering of the state-controlled district continues.

UPDATE: The panel later voted against an application for charter middle school in Bentonville because of questions about financial sustainability. It didn’t enjoy Walton Family Foundation support.