The Board of Corrections yesterday approved spending $3.5 million to upgrade fences at four prisons, which have blamed for a series of breakouts this summer by officials. The funds come from the Prison Construction Trust Fund Balance, which had approximately $6.5 million before the approval, according to officials. The Arkansas Development Finance Authority manages and disburses funds from the Prison Construction Trust Fund.

Understaffing, which ADC has also said contributed to violent incidents, cost money, too.

The board, upon request, granted  $2.5 million in overtime pay for guards. 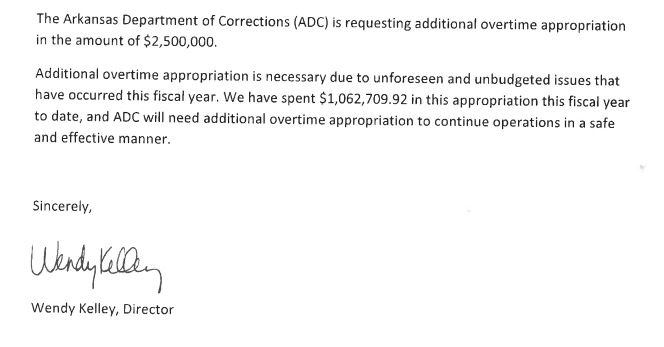 There are currently 547 vacancies across ADC according to a report shown to the board — with 99 at just the Varner unit. The problem could be getting worse, too: There were 68 hires to 115 terminations in the month of September.


This spending is just the beginning as ADC responds to a series of violent incidents over the summer.

Measures were announced earlier this month in response to growing violence at the behest of Governor Hutchinson, including 400 more isolation cells (called “restrictive housing” by ADC), the creation of “controlled access points inside the entrances to general population barracks” (during the meeting these were called “bullpens”), and increased surveillance at prison entrances.

The ADC has 2,191 isolation cells. With the addition of 400 cells, isolation cells will be able to contain around 16 percent of the entire prison population.

The ADC has continually said it needs more segregated cells to isolate prisoners. In September, Director Kelley told the Board of Corrections that if a new prison were to be built, “We need to build a maximum security facility where we can lock inmates down. … Today, we would want those single man cells.”

Sen. Joyce Elliott has called these solutions “just more punishment” and criticized questioned the use isolation.

The ADC has frequently responded to problems by increasing security and punishment, especially in response to the increase in contraband and specifically K2, which we reported could be related to multiple deaths. In response, the ADC restricted inmate mail and, when Director Kelley, asked to say something to fearful loved ones related to deaths from those using drugs and then locked down, said, “To the public and family and friends of the inmates, I would say to not be caught up in any games.”

Another K2 related death was revealed yesterday by KARK.