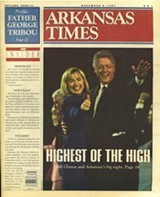 It’s kind of a 25th anniversary today for the Arkansas Times. Bill Clinton was elected president on Nov. 3, 1992. About 4 a.m. Nov. 4, 1992, the staff of the Arkansas Times completed production of the weekly Arkansas Times as if it was the of a daily newspaper, full of coverage of the previous day’s events. Once printed, we hawked it on the streets for 25 cents a copy.

Richard Martin wrote a memorable part of our comprehensive coverage, packed with color from the crazy scene in downtown Little Rock. Celebrity sightings ranged from Bianca Jagger to Hunter S. Thompson. At Doe’s, Molly Ivins joined a big table with me, Vic Snyder and many others.

Rick’s article was sent around to staff at the Clinton Presidential Center Friday and I enjoyed the trip down memory lane so much, I thought I’d put it up this morning. It doesn’t reflect the high drama in our overnight rush to get out a daily newspaper, printed then by the Arkansas Democrat-Gazette. Computers and page-making software have evolved a good deal since that night. We had a few problems.

Some of our other coverage that day can be found at the link.

Noted:  Downtown bridges are illuminated in red,  and blue tonight to mark the anniversary. Also, the Clinton Presidential Center social media — Facebook here — will be running photos from 1992 this weekend.