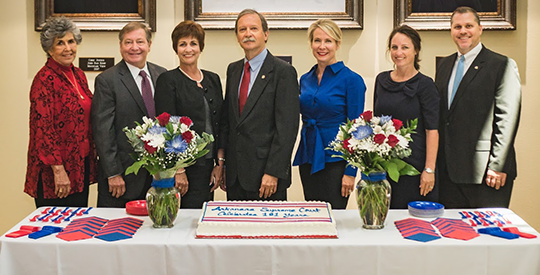 The Arkansas Supreme Court’s 5-2 decision to delay the execution of Jack Greene for a hearing on his mental competency drew criticism from pro-death-penalty legislators, who also gave more indications of unpleasant working conditions at the Supreme Court.

Sen. Bart Hester, a Republican, is one example.

Silence from @judgedankemp as he continues to side with the worst among us. I apologize to the victims and their families for the lack of leadership at the AR Supreme Court in providing Justice. https://t.co/hq05gNv3s2

Word is that @judgedankemp has such a mess at court he can’t get justices around the table to discuss issues. Not even on capitol punishment. People of AR deserve better.

If I had to guess where Hester’s “word” is coming from, I’d guess Justice Shawn Womack, the hyper-political former Republican state senator from Mountain Home. As he usually does, he joined Justice Rhonda Wood, another hyper-political Republican, in voting against a stay of Greene’s execution. (But I’m reminded that Hester also is related to another member of the court.)

Kemp was elected to succeed the late Chief Justice Jim Hannah, who’d lost administrative control of the court to a rump majority of justices — Wood, Jo Hart, Karen Baker and Courtney Goodson. That led to an embarrassing mishandling of the same-sex marriage case and a variety of administrative changes directed by a court majority rather than the chief justice, who is given administrative duties both by Constitution and statute. Kemp has tried to reassume some of those prerogatives, with mixed results.

The atmosphere remains toxic. Howard Brill, the mild-mannered UA law professor who spent a year filling the chief justice’s seat until a successor to Hannah could be elected, opened up a bit about it in an interview with Ernest Dumas for the archives of the Supreme Court Historical Society.

Relations are so strained that the Court has apparently dispensed with the long custom of scheduled weekly conferences to discuss pending cases. Instead, votes are cast by e-mail.

Some more comment on yesterday’s decision, including one legislator’s response to Hester.

We all knew @judgedankemp would be like this. Shameful. My heart is with the Burnett family. I know they must feel revictimized and devastated all over again. VERY SAD!

Extremely disappointing. Imagine the pain the victim’s family must be feeling, to have justice ripped away. #arpx #arleg #ARexecutions https://t.co/geVmhh4AST

Incidentally, I just took a look at Justice Wood’s Twitter account (she blocks me, but I have my ways) and it includes a notice of an opening for a law clerk. The reference to death cases was interesting. I wonder if it’s proving a disincentive to some applicants.

Had to chuckle at some dialogue that occurred on Wood’s Twitter stream about this ad, given current circumstances: 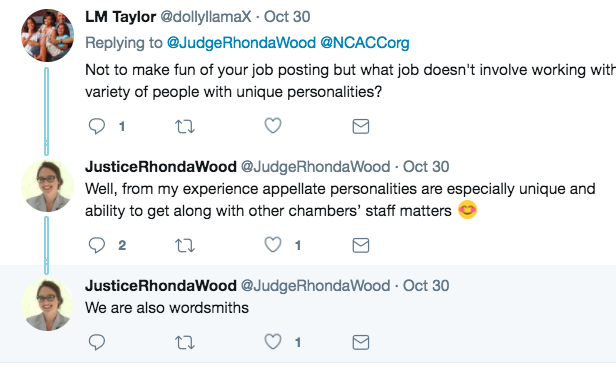