Here is the open line. I’ll try to add something later from the Clintons’ talk with James Carville. A throng turned out earlier today for Hillary’s book signing.

She made headlines today with a Mother Jones interview about the need for an independent review of the 2016 election given the rising tide of evidence of Russian meddling including contacts with the Trump campaign, plus election irregularities in critical Wisconsin, a narrow win for Trump. She said there were questions about the legitimacy of Trump’s election and the White House had no interest in truth, but she also said a House impeachment resolution was premature.

UPDATE: At the Statehouse Convention Center there was fond remembrance of the campaign and recitation of eight years of highlights. The current administration was referenced, though not by name. “phony history” and the “baloney” of trickle-down economics. She talked of the Irish peace agreement, which took risks and years of work. “He didn’t Tweet about it,” she said to great applause.

Many good words for Al Gore, particularly from Hillary on his environmental work with the clear implication that it is being undone.

As as I listened I thought:  Donald Trump simply couldn’t talk at the most basic level on any of the things about which the Clintons have so much commanding understanding. He could just froth and Tweet. No wonder he has such a complex about the woman who beat him in the popular vote, an obsession she noted herself =,

Hillary her work on the children’s health insurance program, which has insured millions, saved lives and so far has not been renewed by the current Congress.

“Being president is a job,” Bill Clinton said. In his time, voters seemed to like candidates who knew something, he also observed.

Toward the end of the session, Hillary talked for 10 minutes about what Carville called the elephant in the room, her loss in 2016. She spoke of the FBI, Russians, vote suppression, right-wing media and Internet fiction “There is no such thing as an alternative fact,” she said. She talked of Trump’s obsession with her and cracked, “”Between tweeting and golfing I wonder how he gets anything done.” She said she’d work to make sure history isn’t repeated in future. elections. She shouldered some of the blame for the loss and said she’d used many strategies including yoga and reading mysteries (“where the bad guy always gets it in the end”) to cope. But she emphasized a movement to work on issues and future candidates. Persistence counts, she said.

I recommend watching her response when the video is posted on the Clinton School website. It comes in the last 15 or 20 minutes.

Bill Clinton, asked by Carville to close on an optimistic note, said Democrats should stop whining about the unfairness of districting and turn out the vote in mid-term elections. He also lauded reaching out to the world and lauded the positives of diversity in race and gender in governance rather than trying to drive a stake between people. Who could he be talking about? 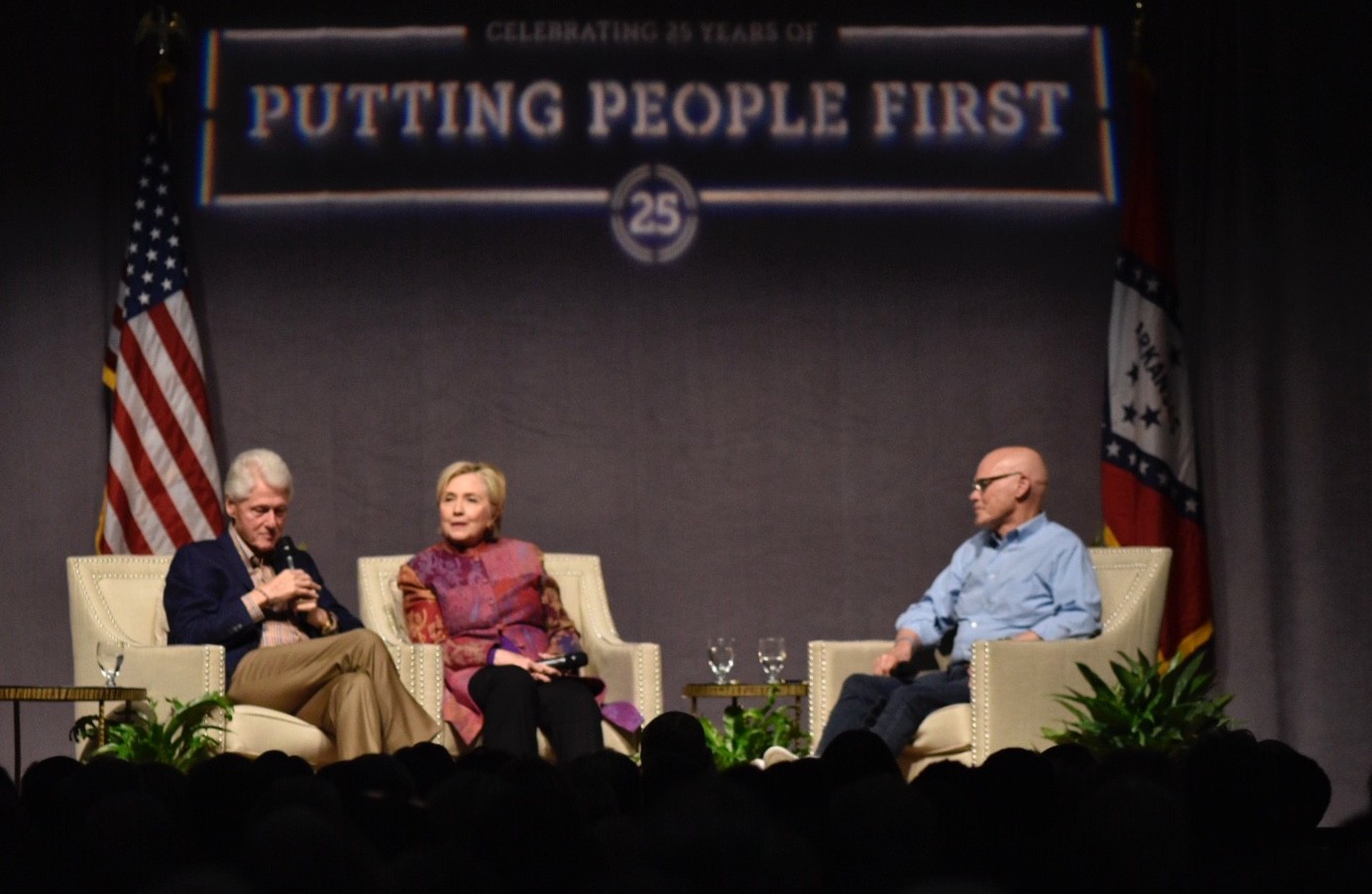