Birth certificates are once again being issued at the Health Department after a brief halt due to a judge’s order.

Pulaski County Circuit Judge Tim Fox this morning ordered the state to stop issuing birth certificates until the state initiated a fix to procedures that had been found unconstitutional by the U.S. Supreme Court.

In response, Gov. Hutchinson today sent the Health Department a directive for new procedures in order to comply with the equal protection clause of the Constitution. Previously, parenthood was presumed in the issuance of birth certificates to opposite-sex married copies but not to same-sex couples, which the Court found unconstitutional. Under the governor’s order, married same-sex couples will be treated the same as opposite-sex couples — that is, female spouses of mothers will be treated the same as male spouses — and such couples can receive corrected birth certificates at no charge if they have a certificate under the old rules.

“Following this directive will comply with the constitutional directives set forth [by the U.S. Supreme Court and the Arkansas Supreme Court] and therefore complies with the injunction issued by Judge Fox,” Hutchinson wrote. “Accordingly, the Department may continue issuing birth certificates in accordance with this directive.”

Fox himself had stated in his order this morning that he was hopeful that the governor would step in with an executive order.

The governor’s fix is as follows: 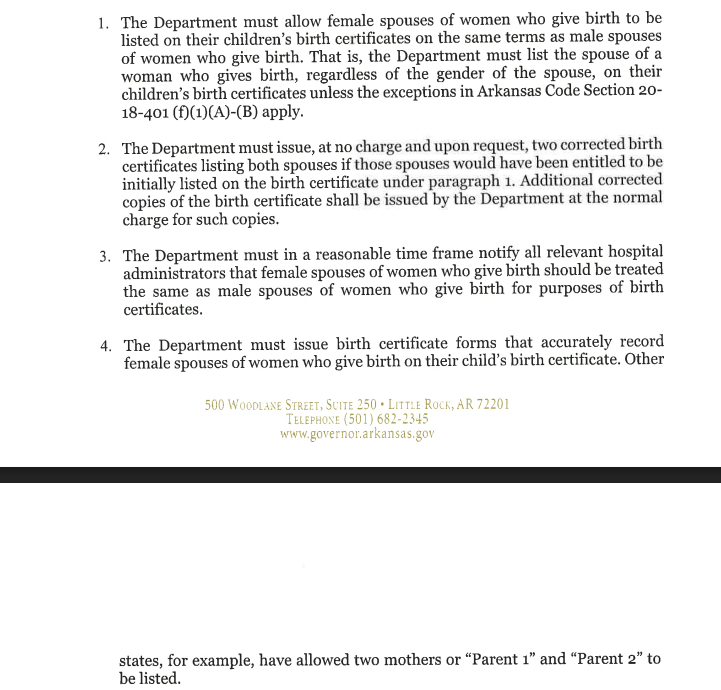 In response, the Department of Health announced that it has begun processing birth certificates again:

Will Hutchinson’s fix satisfy the plaintiffs — and  will it satisfy Judge Fox and pass constitutional muster? Looks like it to me. We’ll see. Attorney General Leslie Rutledge has issued a statement calling it a “reasonable solution.” If so, it’s unclear why the state couldn’t have enacted this solution months ago instead of dragging its feet. Fox’s order seems to have inspired a revision of procedure within a matter of hours.

Prior to Hutchinson’s directive, the Department had briefly halted issuing all birth certificates (new, amended, or replacement) in response to Fox’s order. The Department had stated that they would collect information for future processing:  “If people arrive at the ADH Vital Records Office, there are Staff on-hand to assist. We will collect all their information and process their request as soon as birth certificates are able to be issued again.”

Jessie Turnure of KARK shared a photo on Twitter of signage at the department during the brief time when certificates were not being issued: 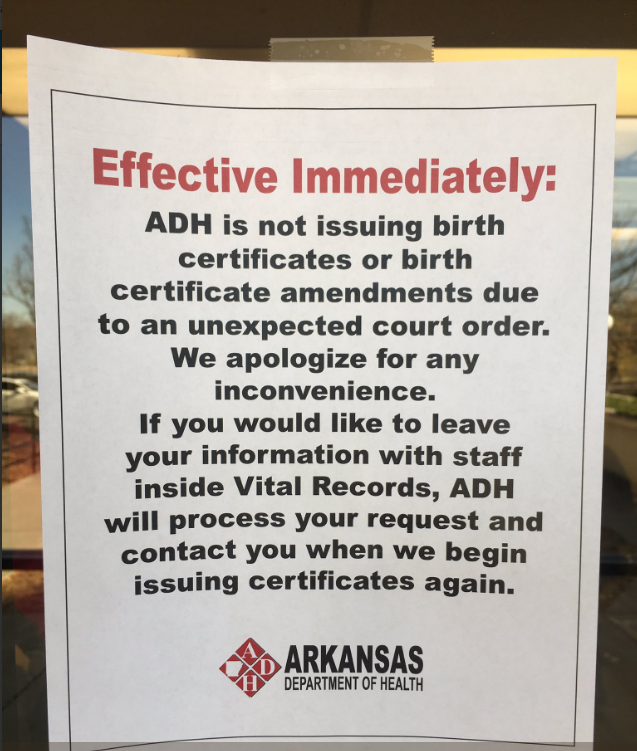 Hutchinson’s order covers lesbian couples — what about male same-sex couples who use a surrogate mother? According to the Health Department, the surrogacy process does demand a court order, but the process is the same for same-sex and opposite-sex couples. Couples typically get the court order handled before the birth. The process from there works more or less like adoption —  a birth certificate is created with the surrogate mother’s name but it’s sealed; the parents (whether a same-sex or opposite-sex couple) then bring a court order to the Health Department and get a birth certificate with their names on it. I’m no lawyer, but there’s not the same sort of bright-line equal protection problem, it seems to me, because the process is exactly the same for same-sex couples and opposite-sex couples who use surrogates. The surrogacy process itself has different procedural requirements from a situation in which the intended mother gives birth to the child.