In his address to the Arkansas legislature’s Joint Budget Committee this morning, Governor Hutchinson outlined a budget that allocates $5.63 billion to state government for the upcoming 2019 fiscal year.

Here’s the document the governor and his budget officials gave to legislators.

The figure is about $100 million less than the amount projected by the governor approximately a year ago, when he presented lawmakers with a two-year budget recommendation that looked forward to FY 2018 and FY 2019.

Nonetheless, the FY 2019 allocation presented by the governor this morning also represents a $172 million increase above the amount budgeted for FY 2018, the current fiscal year. (The state fiscal year runs from July to June, and FY 2019 will begin on July 1, 2018.)

In other words, the state budget will grow in FY 2019 — but by an amount less than was previously proposed, as illustrated below. (The amount proposed by Hutchinson a year ago is in light blue; the amount proposed today, along with projected total spending for FY 2018, is in darker blue.) 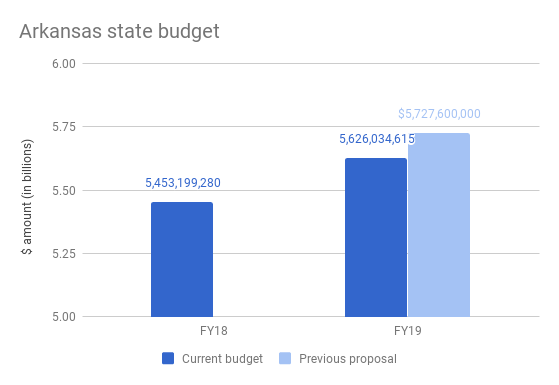 Hutchinson said the figure “reflects real spending cuts in a number of agencies — through efficiencies without a reduction in services.” He also cited healthy revenue collections: Despite hefty tax cuts enacted by the legislature in recent years, the state’s collections have grown, fueled by a strong economy.

“In 2017, we had the lowest level of unemployment in the history of the state of Arkansas, along with a record number of Arkansans that entered the workforce. Wage rates are up, Medicaid enrollment is down, and SNAP benefits are the lowest in nine years,” the governor said, to applause from legislators. He lauded the $100 million tax cut approved by the legislature in 2015 for “putting more money in the consumer’s pocket.”

The state Department of Finance and Administration’s revenue forecast for FY 2019 is around $5.69 billion. Since the governor’s budget is only $5.63 billion, that means a significant amount of money — around $64 million — will be left over as surplus. (Though it should be noted that this “surplus” amount is somewhat arbitrary; it exists partly because the budget is drawn up conservatively.)

In the past, such surplus typically flowed into the General Improvement Fund, a pot of cash which legislators tapped to benefit projects in their districts — some worthy, some not. But due to a recent state Supreme Court decision forbidding the practice, the GIF is no more. (An ongoing criminal case involving GIF money used in an alleged bribery scheme in Northwest Arkansas hasn’t helped matters.)

Instead of fueling the GIF, the governor’s budget “allocates 75 percent of surplus — $48 million — to a new restricted reserve fund that can only be touched with the concurrence of the legislative branch,” he said.

Will this “restricted reserve fund” be used for the same sorts of local projects that the GIF previously bankrolled? How will the money be allocated? Such questions have yet to be answered.

The other 25 percent of the surplus, or $16 million, will be allocated to highway funding. Tax-averse Arkansas legislators have repeatedly failed to create a mechanism to reliably fund road improvements in the state in recent years, which has led to the state Highway Department siphoning off general revenue designated as “surplus.”

Among factors that led to the smaller budget (smaller, that is, relative to Hutchinson’s proposal from last year), the governor mentioned:

*K-12 education. The governor said the state’s education adequacy fund, which is funded by a 7/8-cent sales tax, is for the first time able to fully meet the legislative mandate on adequacy spending. “This means the $50 million that we planned to transfer from general revenue will not be required and we will still be able to meet the adequacy requirements set by the legislature,” he said. (At first glance, it appears this change is attributable to economic growth and an increase in sales tax revenue.)

*Medicaid. As the governor outlined last week, the state has reduced its Medicaid rolls by around 116,000 people, about half of them low-income adults in the Medicaid expansion program, Arkansas Works. (The other half were in “traditional” Medicaid, which includes children, the disabled and the elderly.) Hutchinson said today that the national growth rate for Medicaid spending was around 5.6 percent, but Arkansas’s projected increase would be just 2.1 percent due to decreased enrollment and “efficiencies” pursued by the Department of Human Services, which administers Medicaid.

The governor said that the changes were “not a severe tactic” but were good news for the state. “This is not because we’ve reduced eligibility or reduced services. That’s not happened. This is because of transformation efforts in DHS … and because more people are working and increasing their income. … As a result, the budget reflects a reduction in spending of over $55 million compared to the FY19 budget outline presented a year ago.”

Hutchinson also outlined what lies behind the $172 million increase in actual dollars requested from FY 2018 to FY 2019:

*General Improvement Fund. The $51.1 previously designated as GIF money will now count as general revenue. This appears to be a matter of accounting, not an actual increase in spending.

*State/federal Medicaid match rates. As laid out in the Affordable Care Act, the state’s share of the cost of Medicaid expansion rises this year, meaning Arkansas must spend $35.7 million more on the Arkansas Works program. (The federal government still covers over 90 percent of the costs.) However, the state must also start paying a larger portion of its traditional Medicaid program as a result of its improved economic situation. The changing match rate on traditional Medicaid will cost the state another $48.6 million.

*More child welfare caseworkers. The Division of Children and Family Services would get another $7.3 million.

*Reimbursements for county jails and other corrections. County jails that house state prisoners would be allocated another $4 million. State prisons and the community corrections system will also receive some additional funding

*Higher education funding formula. Colleges and universities would receive around $12 million more, part of which is in exchange for implementing the state’s new productivity funding model. The governor called for a freeze on in-state tuition rates at four-year institutions of higher education.