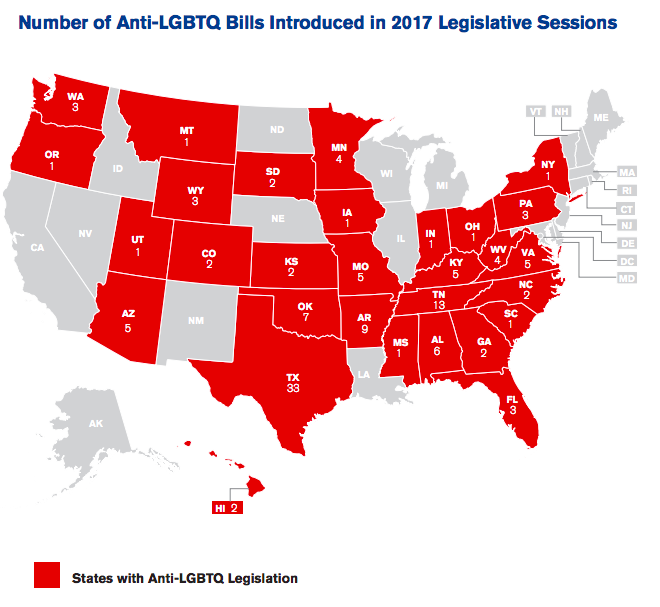 Arkansas, along with twenty-six other states, was ranked in the lowest-rated category, “High Priority to Achieve Basic Equality.” You can see the Arkansas scorecard here.

This is the fourth annual national report, done by HRC in partnership with the Equality Federation, assessing the impact of state legislation impacting LGBTQ rights. Arkansas has consistently posted poor scores on the index.

Every year, the State Equality Index gives us an opportunity to share some of the victories and heartbreak from the state-based movement for equality. This year it’s more important than ever because our progress is under assault from the Trump administration, Congress, and the courts. Despite our emboldened opposition, we still have great opportunity for legislative advocacy and policy making on the ground in states where this work has a critical impact for millions of Americans.

More than 125 anti-LGBTQ laws were introduced across 30 states during the 2017 state legislative season, according to the report, including in Arkansas.

More from the HRC press release:

Even at a time of historically broad and deep support for full LGBTQ equality, an estimated 12 million-plus LGBTQ Americans and their families remain at risk, particularly if they live in one of the 31 states where laws do not adequately protect them against being fired, evicted or denied services because of their sexual orientation or gender identity. Arkansas is one of those 31 states in the country that lack explicit state-level protections for all LGBTQ people.

The map below shows this “patchwork of protections”:

If an LGBTQ couple drove from Maine to California today, their legal rights and civil rights protections could change more than 20 times at state borders and city lines. The vast majority of Americans today understand that this crazy quilt of protections — and lack thereof — is wrong, impractical, and unacceptable. The time has come for us to do away with this ragged patchwork of state laws that fail to protect LGBTQ people equally by passing the Equality Act once and for all.

You can read the full report here.