The New York Times reports today on the Democratic Party’s hope to continue to build in 2018 on encouraging recent victories in state legislative races in, among others, Wisconsin, Pennsylvania and, particularly, Virginia. Republican dominance of statehouses (Koch money helped) is valuable in shaping law, such as drawing legislative and congressional districts.

So then what about Arkansas? If the Arkansas Democratic Party could pick up legislative seats rather than lose more after a run of disasters, that would count as a victory. If it could prevent three-quarter majorities in both chambers, that would be a victory. Hoping for a gubernatorial victory behind Jared Henderson, the only announced is Man of La Mancha territory., but candidacy of a bright, young person is not a bad thing. 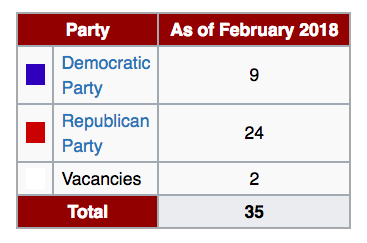 One propellant for Democrats in other states seems lacking in value here — Donald Trump. The polling shows Arkansas stands out as an admirer of the popular-vote loser in 2016. Democrats’ big hopes are in purple states, such as North Carolina, Wisconsin, Florida Pennsylvania. There’s been barely a tinge of blue showing in the red tide in Arkansas for a decade, save Mike Beebe.