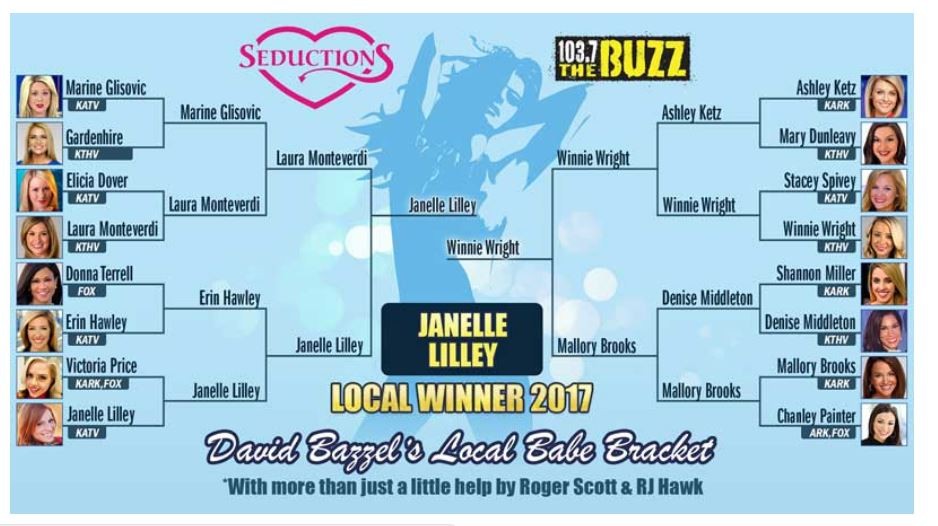 Austin Kellerman, news director of our news partner KARK/Fox 16, has stirred up a hornets’ nest of male privilege and chauvinism by calling on the morning show at The Buzz — Tommy Smith, David Bazzell other cohorts — to end the “Babe Bracket.”

To the uninitiated, this is an event tied for 20 years to the March NCAA basketball tournament. The hosts chose local female TV journalists to fill the bracket and then call on listeners, mostly men, to vote until a final winner is reached. Kellerman wrote eloquently that it was time for this sexist relic to end — objectifying professional women by ranking them on looks.

Oh, sure. The snigg juveniles at The Buzz insist this is a showcase for the women’s journalistic talents and interests, not a beauty pageant. It rings a little hollow from a host who spent show speculating on a prominent civil rights activist’s pubic hair. The lingerie shop sponsorship is a fairly good tell. (Yes, we accept lingerie shop advertising. But not tied to a vote on the comeliness of women journalists.)

It’s gotten ugly. Men don’t like being called down and some of The Buzz crew and their fans have gotten nasty about it. True, some women have said they don’t mind. Some are in a job where to do so might upset bosses, however.

All this is a runup to the “news” that Gov. Asa Hutchinson dropped by The Buzz this morning and gave the snickering sexists a sound bite endorsing their shtick. You should have heard the good ‘ boys yukking it up.

As Jacob Kauffman reported on KUAR:

“Y’all have some fun and everybody enjoys it. We have to be carefull not to be too politically correct. I think everybody knows the good spirit that it is in,” Hutchinson said to the radio hosts audibly enthused delight.

Yee . Whaddya think about Susan Hutchinson on a 1-10 scale, guv? Just having some good fun here.

Maybe somebody suggested that yukking it up with a bunch of Trump-loving sexists on the same day the Trump White House was lying for a repeat wife beater wasn’t such a good look.

I’m a big sports fan and am an occasional guest on The Buzz. Today I quipped that the program was certainly under a lot of fire—including from national sources. My point was simple—I believe the hosts of the show are well-intentioned and their long-running contest was always done without any malicious intent. My comment this morning wasn’t an endorsement of any contest that is based upon looks. All women should be treated with respect, and any measurement of workplace success should be based upon talent and performance.”

Can’t wait to hear what Jan Morgan, Hutchinson’s primary opponent, has to say about this PC crawfishing. Who cares? The governor still fell into the Trump trap of excusing behavior by men that many women might find offensive. Whether they are well-intentioned or mean no harm or not is, besides doubtful, something for the objects of their salivating to decide.

Jared Henderson, the announced Democratic candidate for governor, decided to be heard. Here’s his statement:

Asa Hutchinson is stuck in the past defending the Babe Bracket. We know radio shows have to be entertaining, but in 2018 it’s time to draw a principled line in the sand to oppose sexist sentiments like this one being communicated in the workplace, on the radio or anywhere. The governor was wrong to defend the show and as governor I will set a better example for our state. We should aim high in how we treat women in our state and not encourage lowest common denominator behavior.

Gerard Matthews dumped on this stupid little boys trick several years ago for the Times.

Men are slow learners. But they can learn. Long ago, we had a sex symbol category (male and female) in our Best of . We asked for votes on best “weatherman” relying unthinkingly on a formulation of our youth that was insulting to female meteorologists. Over at The Buzz, they still need some remedial education.

A good lesson would be for the TV women of Arkansas to call in the Buzz hotline this year and say, “Include me out of the Babe Bracket, thank you kindly.”

But TV people live and die by ratings as much as radio. The Buzz is playing to a predominantly male audience in a state that probably would still give 63 percent of its vote to a proud pussy grabber accused by at least 18 women of sexual abuse.

It’s all good fun. Locker room talk. Anybody who says otherwise is just a spoilsport and PC. A loser!

Jan Morgan on “babe bracket” flap: “I’m focusing my time and attention on issues that hard working Arkansans actually care about, instead of weighing in on a senseless and sophomoric radio contest like this one.”