The legislative session is restricted to budget matters unless both houses allow consideration of non-budget matters by two-thirds votes. Which brings us to guns.

Legislators are spoiling to put gun legislation on the agenda. The gun lobby wants to change the new campus/courthouse/tavern/church/wherever concealed carry law to drop a requirement that those who teach courses for a concealed carry permit both the basic and enhanced permit class. The latter is necessary for concealed carry in an expanded list of places, including, particularly, college campuses. I have no dog in this hunt.

The real fight is the effort by some Democratic legislators to clear up particularly bad drafting in the college gun bill. The law prohibits “storage” of a weapon in college but doesn’t prevent people from walking into, through and around college dorm rooms with guns. How would you like to unpack for your freshman year and see the outline of a Glock beneath your roommate’s Go Hogs nightshirt?

The NRA has signaled it will not stand for common-sense editing of the college gun bill.  Its political arm circulated this message to legislators:

Senate Resolution 10 is anti-gun language that seeks to roll back the personal protection legislation that was signed into law last year by Governor Asa Hutchinson. SR 10 would prohibit law-abiding individuals with a valid enhanced carry permit from carrying a firearm for self-defense onto public college and university campuses.

This is a lie.

First of all, the proposal does not “roll back” legislation. It would clarify one provision. But most important: It would NOT prohibit people with the proper permit from “carrying a firearm for self-defense” onto campuses.  (Sorry to say.) It WOULD prohibit guns in dorm ROOMS or suites. If facts matter, here’s the pertinent amendment in SR 10. 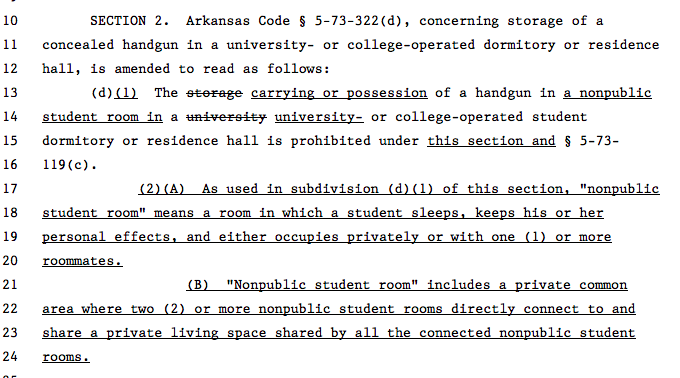