Good read from UA-Little Rock, on a prize-winning history paper by Nancy Tell-Hall, a master’s degree student.  She wrote about the 1962 end of segregated dining areas at Fisher’s Bar-B-Q, the late Doll Robinson’s legendary eatery at Thirteenth and Pulaski.

The wrinkle: Doll Robinson was black. She maintained a separate eating area for white customers. The Urban League mounted a campaign to bring an end to it and finally prevailed. The full article will be published in the spring issue of the Pulaski County Historical Review. A UA-Little Rock news release summarizes:

While the restaurant had an integrated sitting area, it also contained a whites-only room that had nicer flooring and air conditioning. According to Tell-Hall’s paper, the restaurant was a favorite hangout of Arkansas politicians and their families, who entered through the kitchen to avoid the mixed-race dining area.

“It was an interesting little episode in Little Rock history,” Tell-Hall said. “As Mr. Boston Torrence (co-owner of a flower shop across from Fisher’s Bar-B-Q) said, ‘that’s just the way it was.’ Mrs. Robinson even went so far as to give the African-American customers the worst cuts of meat.”

In June 1962, Wanda Knight Hamilton, an administrative worker at the Urban League of Greater Little Rock, and her friend, hairdresser Irma Coleman Armstrong, both African Americans, sat down in the whites-only section at Fisher’s Bar-B-Q. They were refused service and left after Robinson, who was holding a knife, told them to leave.

Afterwards, Hamilton, Armstrong, community members, and organizations began to protest the segregation at the restaurant. In August 1962, Daisy Bates, co-owner of the state’s largest African-American newspaper, met with Robinson, who refused to change her ways.

After the contentious encounter with Robinson, Hamilton and Bates formed the Organization for the Destruction of Discrimination, which began picketing the segregated seating at the restaurant on Aug. 20, 1962. The protest continued until Sept. 3, 1962, when the restaurant caught on fire.

After meeting with Robinson on Sept. 8, ODD declared a victory. Robinson remodeled the restaurant with one large seating area for all the customers. After the protest, Robinson would even sometimes send complimentary food to the Urban League office, where Hamilton worked.

When I arrived in Little Rock in 1973, Fisher’s was still flourishing in the Barbecue Triangle, which included Ballard’s at 14th and High and Sims at 33rd and State. We always thought we sensed a in service and cuts of ribs to BLACK customers at Fisher’s. But we figured, even if true and a deserved small reparation, it was a small price to pay for the barbecue, which had a mustard-enhanced sauce like no other in town then or since.

I wrote a free-lance article, under a pseudonym, for the 2nd issue of the Arkansas Times in 1974 (employees of the Arkansas Gazette were prohibited from working for “competitors.”) It was about sampling every bbq joint then listed in the Little Rock phone book (Never heard of a phone book, whippersnappers? Ask your grandma.) I recall writing something along these lines (then or maybe later) about the ongoing debate over which was the best barbecue in town.

“Gazette reporter Mike Trimble, hunkering over a dripping carton of ribs perched atop his Underwood [that’s a typewriter, younguns. Ask your grandma], said Fisher’s SAUCE is the best FOOD in the world.”

That’s how I remember it, anyway. I know for sure I ate it with Barq’s root beer. 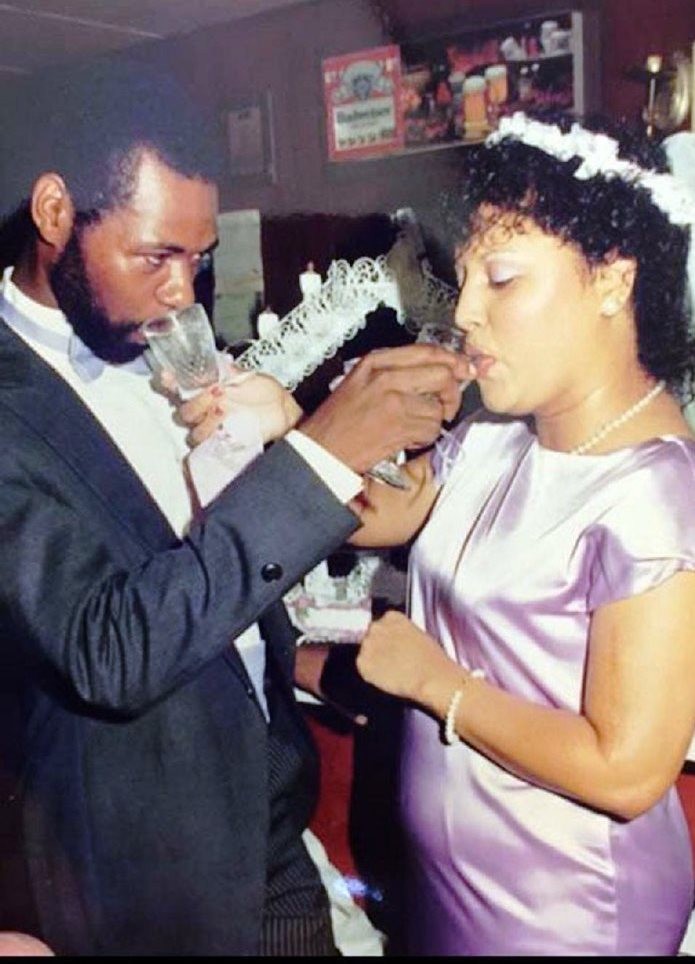 SIDE DISH: Kimberly Dishongh’s feature in the Democrat-Gazette on how couples met just last Sunday featured a couple who met in Fisher’s in 1985 and exchanged vows there — Raymond and Sandra Harris, whose parents then ran the restaurant. Robinson was Sandra Harris’ great aunt. She regrets having no photos of the restaurant but shared a photo from her wedding taken inside.