State Senate President Pro Tem Jonathan Dismang and House Speaker Jeremy Gillam have sent a letter to Governor Hutchinson requesting that he call a special session of the General Assembly, a spokesman for the governor confirmed late Friday afternoon.

Dismang provided a copy of the letter he sent to the governor (see below).

The Arkansas legislature is in the middle of the 2018 fiscal session, which is intended to deal solely with budgetary matters. Non-appropriations bills may be considered during a fiscal session only with a supermajority vote of both chambers. In the past, however, legislative leadership has drawn a clear line in the sand against consideration of non-appropriations bills during a fiscal session, out of a concern that allowing discussion of any one piece of extraneous legislation would open the floodgates to more.

But during this fiscal session, many legislators have clamored to take up a non-fiscal issue: The regulation of pharmacy benefit managers. PBMs are powerful middlemen responsible for negotiating prescription drug prices on behalf of insurance carriers. Arkansas pharmacists say they’re being driven out of business by low reimbursement rates applied by a pricing model recently instituted by CVS Caremark, the PBM which contracts with Arkansas Blue Cross Blue Shield and other carriers.

The pharmacists have much sympathy in the legislature, and two Republican members — Sen. Ronald Caldwell and Rep. Michelle Gray –– have filed legislation that would vest the state Insurance Department with regulatory authority over PBMs and require licensure of the companies doing business in the state.

Dismang said he and  (who are both Republicans) are now calling for a special session because the PBM issue was proving to be a distraction to members.

“It’s been pretty difficult to have a conversation about the budget … [because] most of the conversation has been centering around policy issues,” he said. “We felt like we needed to recenter and refocus the session on what we were sent here to do, which is fiscal matters.”

Caldwell said he’d likely revamp his bill if the governor does indeed call a special session.

Notably, Dismang’s letter does not mention another, related issue that may also require a special session: reauthorization of the state Medicaid budget, which some hardline conservatives refuse to vote for because it contains funding for Arkansas Works, the state’s version of Medicaid expansion. Because of several vacancies in the Senate, the governor may not have the votes necessary to reauthorize the program, and there’s been of resorting to a special session after a round of elections this spring fill the empty seats. The governor, and legislative have insisted they’re not giving up on reauthorizing Arkansas Works during the fiscal session.

The PBM issue hasn’t been the only non-budgetary matter on the table during the fiscal session; some legislators have been calling for changes to a 2017 law that creates a new “enhanced carry” permit for gun owners.

Dismang’s letter doesn’t mention guns. “It’s my understanding that those [issues] are going to be able to handled through the rulemaking process with State Police,” he told me.

However, the letter does mention another matter: “an issue affecting highway funding as it relates to current law regarding an open container of alcohol in a motor vehicle.” Dismang told me this concerns a 2017 bill which was passed mostly for the purpose of giving Arkansas access to a particular federal transportation revenue stream that required states to have such a law on the books.

“We did not accurately define ‘open container,’ so we could still get the $12 million — but it could only be used for safety programs,” he told me. “Clarification would allow it to be used for highways.” 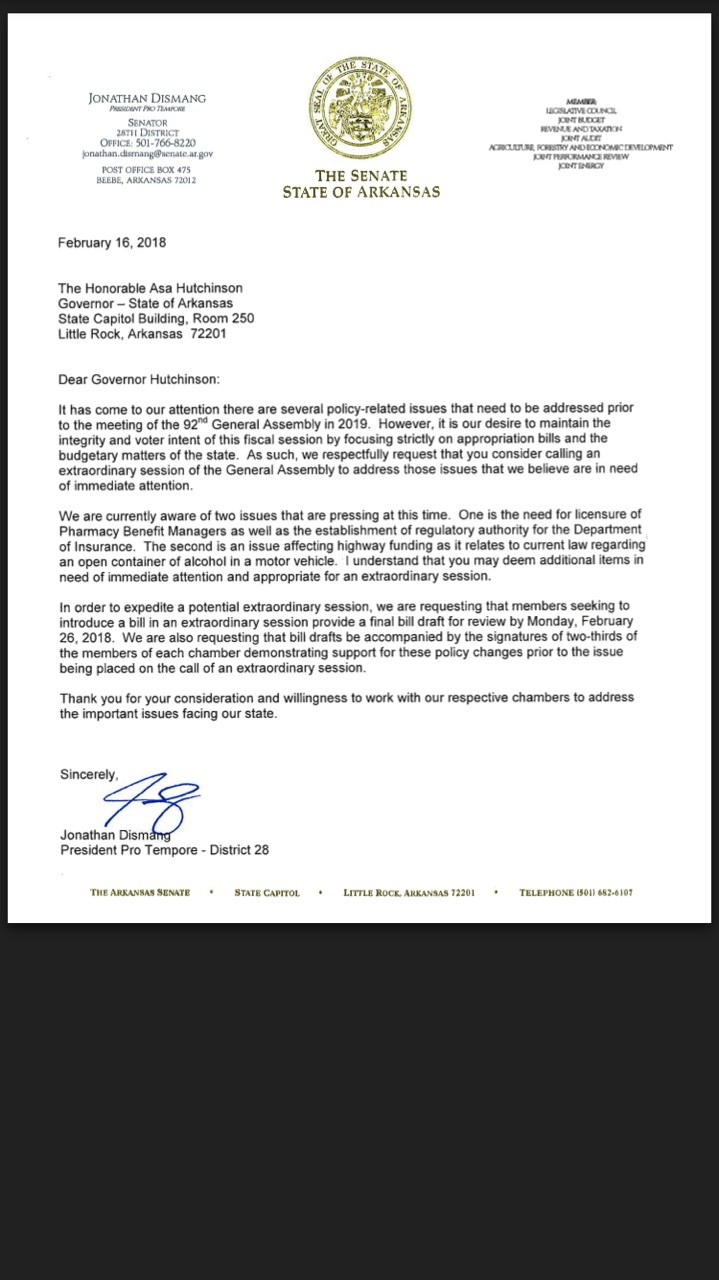