Read this month's issue
Browse the issue archives
Advertisement
Home Arkansas Blog The ‘Babe Bracket’ is no more, at least in title UPDATE


The Show With No Name on The Buzz had me in for an hour of gentle razzing this morning for joining critics of their annual “Babe Bracket” competition among local TV women journalists.

I but could get no answer on the future of the competition this year, a March event loosely patterned on the NCAA basketball tournament. 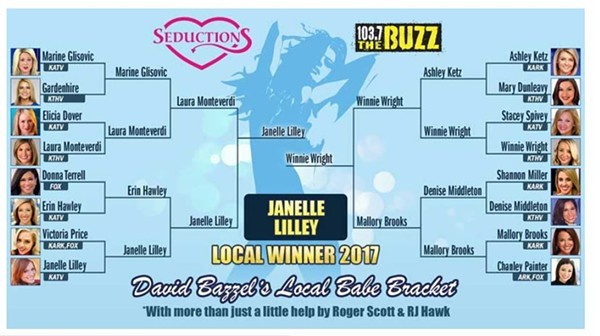 But here’s my prediction: 1) The competition will continue. 2) It will have a new name. 3) The website logo will no longer include the line drawing of a curvaceous cutie. My comment this morning on that possibility, more or less: If it quacks like a duck, it’s still a duck bracket.

UPDATE: Good guess on my part. The station announced late in the afternoon that the contest henceforth will be The Bracket With No Name. You can find a link to my appearance this morning there for our full morning discussion. Said the release:

The goal of this event has always been to let Buzz listeners get to know local [female] TV journalists and celebrities better and allow the contestants to have an open forum to show their personality, share what they are passionate about and talk to members of our great community.

The winner will get a spa package and a $500 contribution to a favorite charity.

With the change, it will still be a competition for listeners (mostly male) to vote for their favorite women on TV. It isn’t about journalism or favorite charities with most voters I’d guess, though participants do get a chance to talk about these things on-air in the course of the contest. There isn’t a hunk bracket. Or a black folks bracket. Or a fat, ugly journalist bracket. Which is a good point to say that the show decided not to take calls during my time on-air. It was their call, but I told them I was used to vituperation. Apparently, some good ‘ boys were spoiling to show off their manhood, like my regular anonymous callers who use masked phone lines late at night to deliver on my voice mail.

During the show, Nick Genty, news director at KATV, answered my question about whether management wishes explained the general absence of women from KATV in the #morethanababe Twitter string that developed. In a text to Bazzel, he said absolutely not.

No one at KATV has been instructed not to talk about Babe Bracket. My staff knows they are respected as a journalist. Period. Always have been and always will be. There was no epiphany for me all of the sudden.

I do think TV personalities — sensitive to branding and ratings — have to think twice before criticizing a top-rated radio show in public and passing up an opportunity for airtime there, even if the context might make some uncomfortable. I also think some women see no ill in the gimmick and like the guys running it. I finally think guys — well-intentioned and nice though they may be — are not always the best judge of what women like. Pitting women in a light-hearted competition based primarily on looks empowers, even if unintentionally, worse forms of sexism. Or so it seems to me.

Austin Kellerman, news director at KARK/Fox 16, came in for criticism this morning for setting off this (useful) debate with a blog post saying it was time to end the Babe Bracket. He’s catching grief today as somehow hypocritical for saying he’s not told his employees what they can and cannot do. They may compete if they choose. The Buzz crew thinks Austin did this as a ploy. I find believable his response that he wished he was that smart — to guess how big this would become.

How big? National and international big. #morethanababe continues to pop.