The Arkansas Medical Marijuana five cultivation permits at a meeting this afternoon.

There was an overflow crowd. Lots of jostling in the line that formed outside in advance of the meeting.

The commissioners theoretically scored each application without knowing who filed it. The top five must pay $100,000 and file a $500,000 performance bond within seven days. Should any of those not comply, the commission will move down the list. The commission released the top 10 scorers today. It doesn’t mean no lawsuits will be filed, but the expectation is that a recent state Supreme Court ruling makes it impossible to sue the state to challenge the commission’s decisions.

The beginning of the meeting included a discussion of how much work was required in the review of just the cultivation applications. It will likely be several months before the dispensary applications are completed and 32 selected. One cultivator said he likely wouldn’t have marijuana ready to supply to retailers until late this year or early 2019, to give you an idea of how far the process has to go.

Here are the top 10, with scorer first: 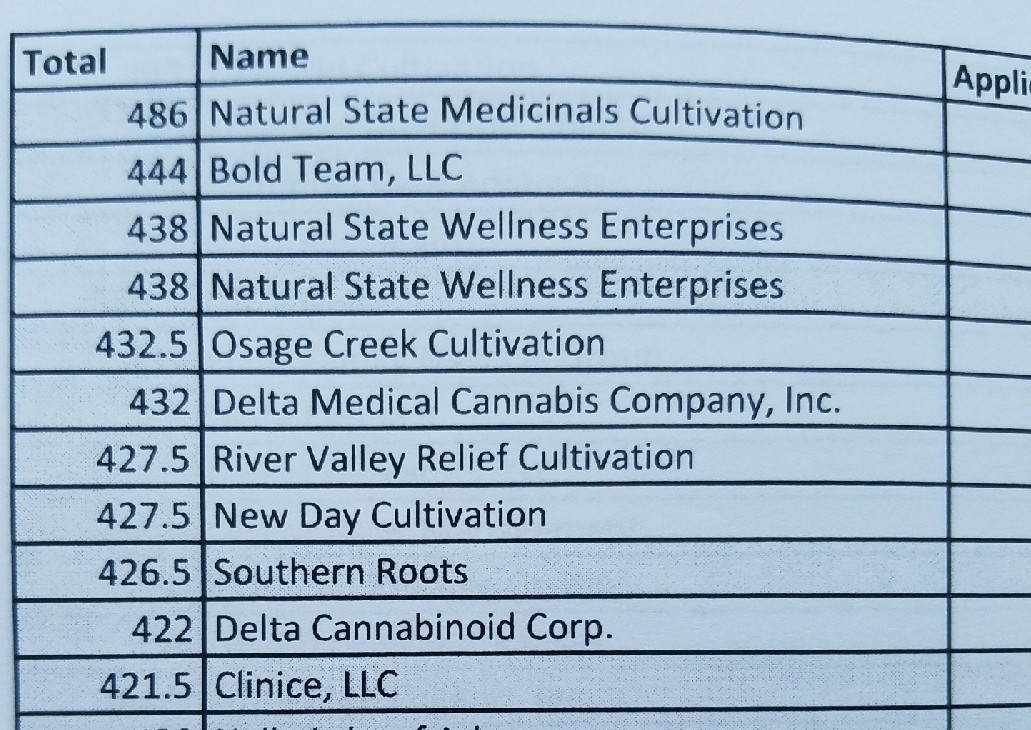 There are actually 11 because one company, Natural State Wellness, had two separate applications. It must choose which one it wants to go forward.

We’ll have more specifics on this, including some of the players. Correction: It is Hank Wilkins V, son of Jefferson County Judge Hank Wilkins and not the county judge, for example, who leads the Natural State Wellness organization. Former Attorney General Dustin McDaniel, who’s working with that group informed me of the distinction. Said :

“We appreciate that it is a public trust that has been placed upon our company to produce quality, safe, and legal medicine to Arkansas patients. We will make a location decision shortly and will promptly begin construction. For the last year, my partner Bart Calhoun and I have served as legal counsel and lobbyists for this effort, and we are both investors in the company, along with a number of fellow Arkansans.”

McDaniel says he’s a part-owner, consultant lawyer for the group which was started by the Ross Group, headquartered in Tulsa.

A Joe Courtright is former CEO of USA Drugs, the drug chain sold by the LaFrance family, who’ve long been rumored to be behind this application.

Willett, who just worked as a consultant not to the Delta group, put me in touch with its leader, Don Parker, a Jonesboro lawyer. He said the entire ownership group is from Arkansas, mostly in the Jonesboro area, but also Mississippi, Woodruff Pulaski counties.

“We’re just elated,” Parker said. He said he’d wait until the release of applications by the commission to specifically identify other owners. He said the group’s Jackson County site qualified for points as a depressed area and he said the group’s 51 percent female ownership also lifted its score.

He said the group has an option to buy up to 10 acres near ASU-Newport from John Conner, a major Newporter farmer, and they plan to build a 25,000-square-foot for the controlled indoor cultivation required. He said the group had consulted people in the business from California and Colorado to prepare. Parker acknowledged there are many unknowns to be overcome, including questions about demand. But he noted medical marijuana, though it requires certification to obtain, isn’t the same thing as a prescription drug in terms of dispensation. Buyers will be offered a range of different strains of product at different prices and potency and be able to buy from any dispensary within limits. He said his group expected about six months of construction time. Once the facility is in place and seeds are planted, it will take another 60 days to reach harvesting stage, he expects.

“We want to make sure we do it right and do it well,” he said. 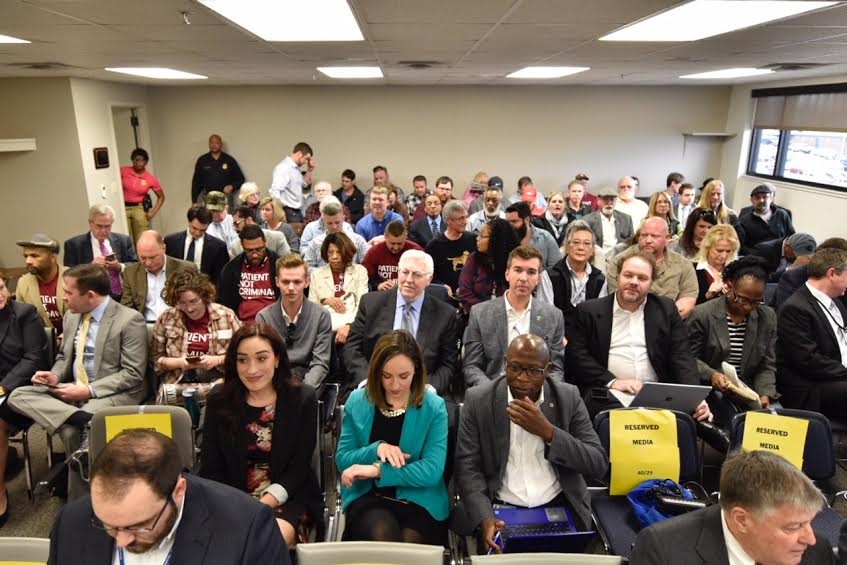 Noted, the group doping the outcome that I mentioned this morning picked two of the five, or three if you count the double application from Natural State Wellness.

Applications got added points for minority participation and location in low-income areas.

Jacob Rosenberg spoke with Angela Ryland, liaison for Bold Team LLC, which calls Cotton Plant home, as she waited to enter the meeting.

“We believe this is going to be the hero of Cotton Plant. We have no industry.”

“Currently, like I said, we have no industry. We have no Dollar General store. We have no service station, no grocery store, no bank.”

Sister Rosetta Tharpe, the musician, is from Cotton Arkansas, she noted.

“So, outside of [Sister Rosetta Tharpe], this is about the best we’ve gotWe have music and marijuana: M&M.”