UPDATE: I moved this up because so many seemed to have missed the early morning post.

The glorious sight of kids marching on National Walkout Day wasn’t diminished a bit by the authoritarians determined to quell student action. It was, in its way, enhanced by those who locked doors in the face of students, or worse, exacted physical punishment. Who looked nobler yesterday?

My kid and two other students walked out of their rural, very conservative, public school for 17 minutes today. They were given two punishment options. They chose corporal punishment. This generation is not playing around. #walkout

Subsequent comments indicated this occurred in Greenbrier and that the punished children were 17.

Greenbrier’s response to the national day of protest, as reported by Greer, an Episcopalian youth minister, “went viral” in social media lingo — 32,000 “likes,” 9,300 “retweets” and 2,300 replies.

My estimate on the number of Greenbrier students convinced of the error of their ways and impressed by the superior wisdom of adult authority: 0.

This is what you might call a “teaching moment.” Except those across the U.S. most in need of instruction aren’t likely to put down their paddles — literal and figurative — anytime soon.

Supportive comments on Greer’s Facebook page included this one: 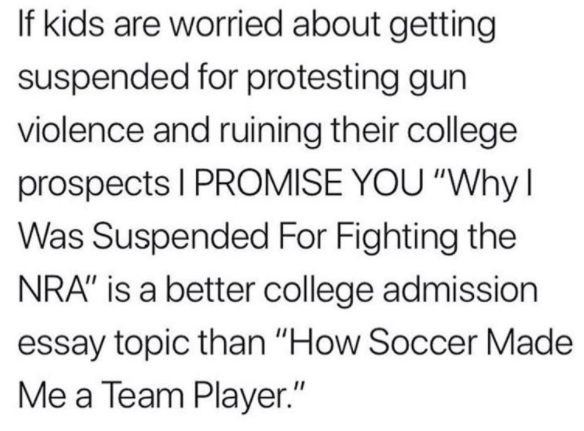 Still searching for comments from the four-member Bentonville School Board majority that encouraged 600 Bentonville students into the streets yesterday with their promise — accompanied by much pontificating about rules and the preciousness of instructional time — that punishment be meted out for an offense to good order. Maybe the board members should go to the mass detention for the students and tell them how stupid and disrespectful they were. THAT’ll learn ’em.