The massive teacher walkout in Oklahoma continues as educators pressure the state legislature to come up with billions in new revenue to make up for years of declining school funding and long-stagnant teacher salaries. In West Virginia, Kentucky and Arizona — all solid Republican states — underpaid, overworked teachers are pushing back.

The Arkansas Education Association will hold a statewide meeting of its members on April 10 to discuss the national wave of walkouts and what it means for teachers in this state, AEA Executive Director Tracey-Ann Nelson told the Arkansas Times on Monday. The organization has heard from a number of members “inspired by the actions taken by their colleagues across the country,” she said.

It’s definitely a topic on the minds of AEA members, Nelson said. “I think we have to hear from them before we do anything. … This is an organization driven by its members. Our goal is to listen to them and hear what their concerns are. … From there, we have a board meeting two weeks after, and we will share the data from the town hall with the board.”

The retrenchment of public education budgets is a story that’s played out across the country, Nelson said. “What has happened to all of our states over time is a divestment in public schools, and the impact is starting to show. … In Arkansas, we see the drip, drip, drip effect of that happening. It’s death by a thousand cuts.”

Oklahoma’s experience differs from Arkansas’s in several key ways. The Oklahoma budget is suffering from a deadly combination of deep tax cuts and stunted revenue collections brought about by low oil and gas prices. Arkansas has cut taxes in recent years too, but not as steeply — at least, not yet — and state revenue isn’t nearly as dependent on the economic fortunes of the petroleum industry as its neighbor. Collections remain strong, buoyed by an unemployment rate at or near record lows.

Then there’s Lake View, the landmark school funding litigation case that requires the Arkansas legislature to boost education spending every two years to ensure the “adequacy” of public schools. As the legislature has become increasingly conservative, its annual adjustments have gotten stingier, departing significantly from the adequacy recommendations made by independent researchers. Still, some increase is better than none. (School budgets require more money each year just to maintain the same level of services, because of inflation and because the number of students grows each year.)

The school fiscal situation in Oklahoma is “much further along” than the one in Arkansas, Nelson said. She noted that Arkansas teachers did receive $800 increase in the salary schedule in 2017 (spread across two years) as a result of adequacy. The average teachers salary in Oklahoma may be the lowest in the country, according to the U.S. Department of Labor. 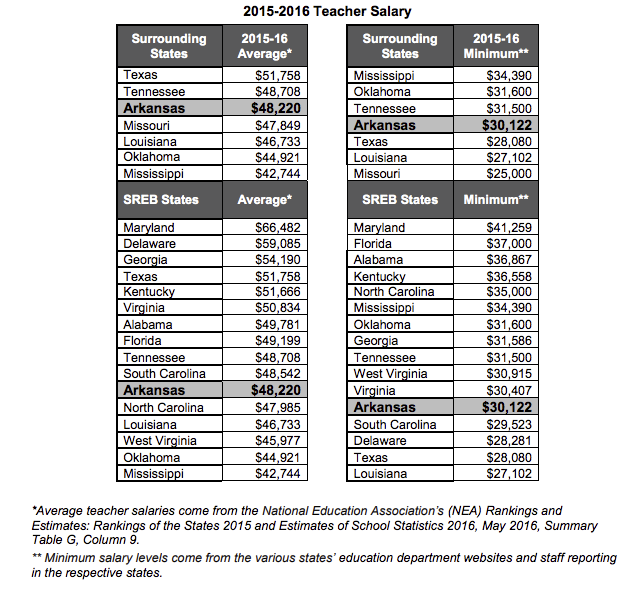 Arkansas’s Bureau of Legislative Research, the agency that prepares adequacy recommendations for the legislature every two years, also compares average and minimum teachers salaries in Arkansas with those of its neighbors and other states. In 2015-16, the BLR found Arkansas’s average teacher salary was $48,220 — less than Texas and Tennessee, but more than Missouri, Louisiana, Oklahoma Mississippi. (Oklahoma’s was $44,921 that year.)

Arkansas ranked 11th out of the 16 states in surrounding states in the Southern Regional Education Board for average salary and 12th for salary. When adjusted for Arkansas’s relatively low cost of living, however, the state’s ranking moves up to 9th.

The 2016 salary report is the BLR’s most recent; it will prepare a new one this summer in preparation for the adequacy report in advance of the 2019 legislative session. (It should be noted that aggregate figures can mask large disparities within a state. Teachers in Northwest Arkansas or Pulaski County are in a much different position than those in shrinking Delta towns.)

The BLR tracks salaries in neighboring states in part because what happens in Oklahoma affects Arkansas and vice versa. One of the many reasons for Oklahoma teachers’ unhappiness is that chronically low pay helps fuel extraordinarily high turnover.  Stiffing teachers incentivizes them to seek better-paying jobs in neighboring states — including, yes, Arkansas. A University of Oklahoma professor found in a survey of 250 former Oklahoma teachers that they earned around $19,000 more on average after leaving the state. (Such problems tend to compound one another: Instability in the teaching corps of a given school makes life harder for those who remain and results in a less functional school in general.)

In other words, if Oklahoma teachers succeed in winning the raises they’re seeking, Arkansas will have some catching up to do if it wants to stay competitive. That’s something Arkansas legislators will need to consider heading into the 2019 regular session.

Arkansas also may not be ripe for a teacher walkout for the simple reason that its legislature is not in session. In Kentucky and Oklahoma, teachers are leaning on lawmakers while they’re gathered in one place to craft their state budgets. In Arkansas, the General Assembly just wrapped up its brief 2018 fiscal session and legislators won’t return to the Capitol until January 2019.

On the other hand, most Arkansas legislators are up for reelection this fall, Nelson pointed out.

“I see pressure not just in the form of direct action by educators, but also the choices they make at the ballot box,” she said. action is a tool that has to be applied carefully, she said. “You really have to plan. You can’t just wake up and say ‘OK, we’re going to walk out!’ In West Virginia, that was a 3-year plan. They made sure superintendents were supportive, they made sure families were supportive, they made sure there was going to be for kids [when schools closed].”

“You have to have all your ducks in a row so you don’t create anger in the community,” Nelson said.

At the same time, the AEA must pay close attention to the mood of its members. Teachers in West Virginia made the decision to walk out in defiance of union leadership, who advocated a more conciliatory approach. In the end, the “wildcat strike” resulted in a five percent pay raise for teachers — a huge victory.

“That’s why it’s important to keep your members engaged, so you’re hearing your voices,” Nelson said.

The last time teachers mobilized en masse at the Arkansas Capitol was in 2013, when health care premiums skyrocketed and the state’s underfunded public school employee health insurance system nearly collapsed. (The legislature eventually found enough money to stabilize the system, though not enough to truly fix the problem; teacher health benefits remain uncommonly expensive in most districts across the state.)
Shelley Smith, an educator in Stone County, was among those who organized her colleagues to demand action from legislators. In 2013, she created a Facebook group to gather stories and inform teachers about what was happening with their health care. That group remains active today and has over 10,000 members.

Smith told the Arkansas Times that events in Oklahoma, West Virginia and Kentucky are being watched closely by teachers across the state. She posted a survey over the weekend attempting to gauge the level of teacher discontent and asking whether they feel respected by their communities. As of Monday, 881 teachers had responded — a self-selected sample, but a significant group nonetheless.

Ninety-five percent responded “no” when “Do you feel your thoughts, opinions, and expertise are valued by decision-makers at the state level?”

Smith said she felt a strike in Arkansas was unlikely, “unless something drastic happens” in regards to public education. She acknowledged a number of respondents used the word “strike” in responses to the survey’s final, open-ended questions, which asked teachers for next steps. But, she noted, there were many other suggestions among the hundreds of responses, from paid incentives for continuing education to funding the state’s dyslexia instruction mandate to simply boosting pay and benefits.

(A personal note on the picture at the top of this post: By coincidence, I was traveling through Oklahoma on Tuesday afternoon and decided to stop in OKC to see the scene. Most protesters had dispersed by the time I arrived at the Capitol, but I managed to speak to Melody Lunday (who happens to be a Russellville, Arkansas native) and her daughter Bre. Melody isn’t a teacher, but she’s protesting because Bre hopes to be one when she graduates college in three years. Bre plans to teach music — she had her French horn with her on Tuesday — and she said there’s little chance she’ll stay in Oklahoma, considering the deteriorating state of the schools.)