Well. It appears a public feud has erupted between two of Arkansas’s most inflammatory right-wing politicians: state Sen. Jason Rapert (R-Conway) and gubernatorial candidate Jan Morgan, who is challenging Governor Hutchinson in the May 22 Republican primary.

Morgan has highlighted Facebook comments in which Rapert compares her to Jezebel, the Old Testament queen who, in the book of 1 Kings, convinced her husband, King Ahab, to abandon the god of the Israelites in favor of worshipping the deity Baal. Jezebel’s transgressions earned her a gruesome death, as well as a place among the Bible’s greatest villains. In Christian lore, she’s come to represent the essence of a seductive woman who manipulates her way into power.

Morgan, who has made a name for herself with furious pro-gun extremism and open bigotry against Muslims, responded on Facebook. “You know the Governor’s water boys have hit desperate times when the ‘christian’ senator, a pastor, calls me Jezebel and a ‘spirit ‘ putting a spell on Arkansas men who support me,” she wrote. 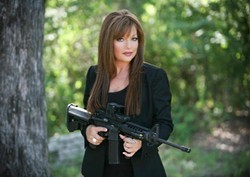 It started, as these things do, with a Facebook post. Rapert shared a link to a recent Talk Business & Politics poll showing Hutchinson enjoys a commanding lead over Morgan among likely Republican voters. “There is no comparison. Gov. Asa Hutchinson is doing a good job as our governor and we need him to continue,” the senator wrote.

Rapert is familiar with online controversy. He’s built his political identity on demagoguing social issues such as abortion and LGBT rights and embraces a conspiracy-laden narrative in which Christians in the U.S. are the subject of continual persecution by a radical, deviant Left aided by Islamist extremists. He’s a master of raising liberals’ blood pressure — and, seemingly, his own — with outrageous statements, coupled with his willingness to endlessly and angrily argue his points with disgruntled commenters. Rapert considers himself a conservative’s conservative.

But in this case, Rapert’s mundane endorsement of Hutchinson earned the wrath of a different group: Jan Morgan supporters. One user wrote, verbatim, “You are an idiot, look up Aca’s voting record, he votes with the Democrats he is taxing us to death an spending like a Democrat an if you support him than you need to be gone to.” Many others piled on, calling Asa a “liberal,” a “globalist” and (that dreaded label among the GOP base) an Establishment Republican.

True to form, Rapert waded into the comments to battle it out with his detractors. Which led to the following exchange: 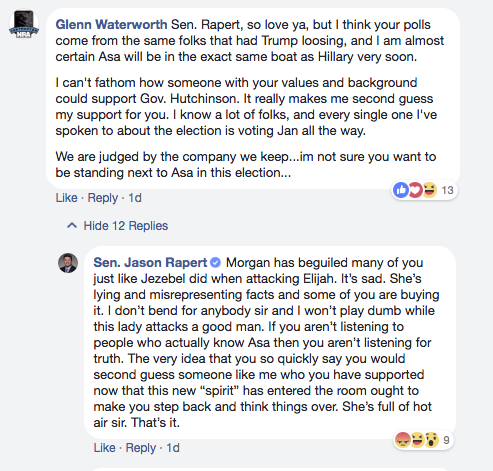 Morgan’s supporters pilloried him for the comment. And Morgan herself was quick to seize on the opportunity, slamming Rapert both for his coziness with Asa and the obvious sexist connotations of the Biblical epithet. She also touted her own evangelical cred:

His attack on me is based on his relationship with my opponent in this race. It’s unconscionable that a pastor would resort to this kind of baseless personal attack.

I served two terms on the Executive Board of the Arkansas State Baptist Convention, on Sr. Staff of a church for several years, and co-hosted a tv show with Governor Mike Huckabee on the first Christian Tv network in Arkansas ..

Why don’t you just step out there and call me Satan incarnate, Jason Rapert?

By the way, your implication that men in Arkansas support me based on my appearance is insulting to all educated men in this state who support me because of my fiscal and Constitutional Conservative policy platform .

In addition, your remarks are sexist and insulting to all women in Arkansas who are victimized by men like you who accuse them of professional success based on their physical attributes .

The spat may seem odd at first, considering Morgan and Rapert seem to share certain views (most notably, their extreme animosity toward Muslims). But hot button social issues aside, Rapert has often tilted toward the more establishment wing of the Republican Party when voting as a legislator, a fact masked by his firebreathing online persona. He’s supported the governor on Medicaid expansion, for example. 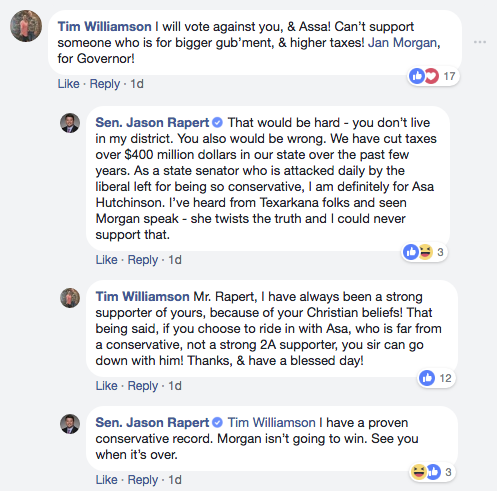 Most importantly, Rapert’s love for rhetorical combat really only manifests when it’s directed toward the Other Side, meaning liberals and their ideological allies. In the endless partisan trench warfare that defines our political era, he’s among the most enthusiastic warriors to be found. In contrast, Morgan seems happiest when attacking Republicans from the right. A self-styled Trumpian, she imagines herself waging a guerrilla war against RINOs like Asa and his enablers — Rapert included. And, as the response to the senator’s post shows, Morgan has plenty of supporters among the GOP base, even if Asa outpolls her two-to-one.

Rapert doesn’t have a primary challenger, so he’s in no danger in the May 22 election. (He will have a Democratic opponent this fall in Maureen Skinner, though it’s hard to imagine Morgan supporters defecting to support her candidacy.) Still, ugly intra-party fights like this one run the risk of dampening GOP enthusiasm and suppressing voter turnout in both the primary and general elections.

One can hear echoes of Republican elections past, in which conservative pols who thrived for years on fostering the anger and resentment of their party’s shrillest voices found themselves placed on the defensive by an ascendent Donald Trump more skilled at raw demagoguery than they. Jason Rapert made his name throwing bombs on social media; now, suddenly, he’s being called a shill for the globalist elite. It calls to mind Matthew 26:52: “For all who draw the sword will die by the sword.”