On Thursday morning, after a replacement monument to the Ten Commandments was installed at the state Capitol grounds, state Sen. Jason Rapert (R-Conway) told a crowd of media, supporters, detractors and onlookers that the monument was not intended to send a religious message, but simply one about history.

“The sole reason that we donated this monument to the state of Arkansas is Ten Commandments are an important component to the foundation of the laws and the legal system of the United States of America and of the state of Arkansas,” Rapert said. The senator, who sponsored legislation in 2015 that paved the way for the monument’s creation, also heads the American History and Heritage Foundation, the nonprofit created for the purpose of raising private funds to build the display.

The first version of the monument was installed last June but was destroyed within 24 hours when a man, apparently mentally ill, rammed it with a car. This second version is protected from vehicular assault by concrete bollards; Rapert’s words are intended to help shield it from the inevitable court challenges over religious freedom and discrimination. The ACLU of Arkansas has stated its intent to file suit, and the Arkansas Society of Freethinkers will sue as well. The Satanic Temple, the group that successfully battled a similar monument in Oklahoma in 2015, said it will file as an intervenor to any such lawsuit. As in Oklahoma, the Temple seeks to install a 10-foot bronze representation of a goat-headed deity called Baphomet on the Capitol grounds, which they describe as a symbol of religious pluralism.

Before the ceremony today, Satanic Temple spokesperson and co-founder Lucien Greaves said he felt good about the group’s chances.

“I honestly don’t think the Ten Commandments monument has a shot at staying here legally,” he told the Arkansas Times.

Greaves points not just to the First Amendment of the federal Constitution but also Article 2, Section 24 of the state Constitution, which states “no preference shall ever be given, by law, to any religious establishment, denomination or mode of worship, above any other.”

In Oklahoma, the Ten Commandments matter was resolved in state court, rather than the federal judicial system, he said. “And I feel like the Oklahoma [constitution’s] church/state separation language was less strong than Arkansas’s, so I really feel this just doesn’t stand a solid chance.”

The Satanic Temple will seek to intervene in the other parties’ suit or suits, he said, rather than simply joining them, because it is taking a different approach than the ACLU or the Freethinkers. “Even though the facts are the same … our claim is different, in that we’re not asking for that to come down,” he said, gesturing to the newly installed Ten Commandments. “We’re just saying that if it’s going to be there, it’s illegal for them to deny our monument to be on the Capitol grounds as well.”

Greaves said the Baphomet statue is currently at the Temple’s headquarter in Salem, Mass. “It’s ready to go. Ready to be placed.”

In 2017, when the first iteration of Rapert’s monument was erected, the Satanic Temple sought approval for its own monument from the Capitol Arts and Grounds Commission. But Rep. Kim Hammer (R-Benton), who was a co-sponsor of Rapert’s 2015 bill to authorize the Ten Commandments display, sponsored and passed a bill that would have required similar legislative approval to even begin the process of erecting a new monument on the Capitol grounds. That meant the Temple would have had to find a sponsor for Baphomet in the Arkansas legislature.

“The idea is that if you set up a bureaucratic approval process like that, that anybody has to go through, then it’s not discriminatory,” Greaves said. “But it still is if you have the House or the Senate deciding which religious viewpoints they’ll sponsor for a bill or not. It doesn’t take away from the viewpoint discrimination aspect of it in the least.”

“We reached out to everybody who could possibly sponsor the bill and bring it forward in the House or Senate, and nobody would do it, of course. We even got emails back from some people saying they wouldn’t do it because we were us — because of our viewpoint.” That, he said, demonstrates “kind of a complete disregard for pluralism and constitutional liberty overall. I think that’s sad, and I think this is hopefully a lesson to some about what those things really mean and what they stand for. … I hope when all is said and done, people don’t see this as much as an attack on their religion as they see it as a fight for everybody’s religious freedom.

“If you look at the bill that was passed to justify putting the Ten Commandments up, it says ‘This is in no way to be construed as a preference of one religious viewpoint over another.’ It’s all fine and good to say that in the bill, but then to immediately deny other religious viewpoints from being on the Capitol grounds — it gives the lie to it,” Greaves said. 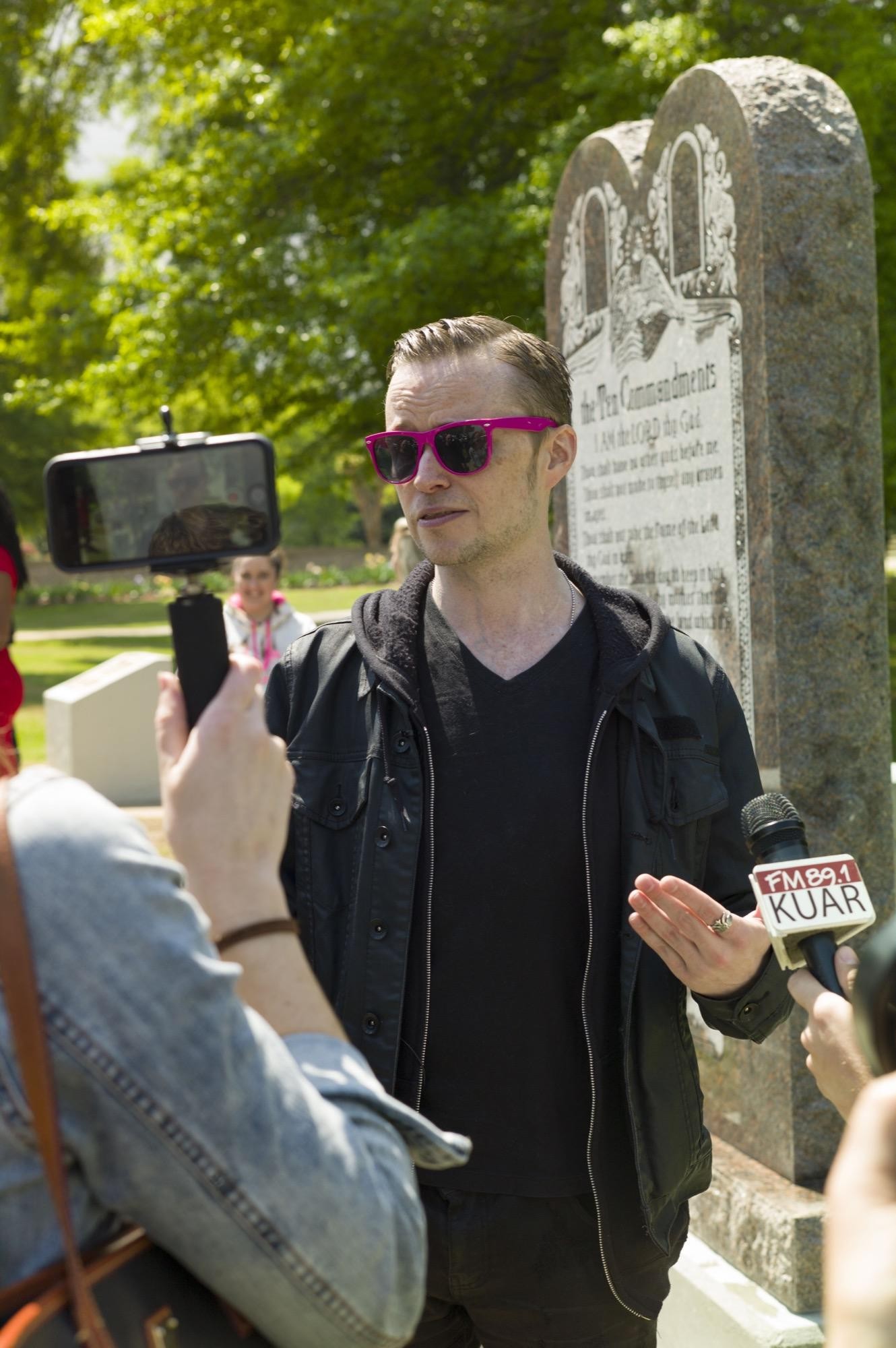 Rapert said Thursday that he too was confident he would prevail in court.

“The [U.S.] Supreme Court has determined that privately funded, passive displays of the Ten Commandments are constitutional,” he told the crowd. Rapert said he’d personally visited monuments on public grounds at state capitols in Phoenix, Denver and Austin. The monument installed in Little Rock Thursday is an “exact replica” of those, he said.

The senator also quoted from the 2004 U.S. Supreme Court case Van Orden v. Perry, in which a majority of justices allowed the monument in Texas to stay put. “‘The establishment clause does not compel the government to purge from the public sphere all that in any way pertains to the religious,'” he said, attributing the words to Justice Stephen Breyer.

Gerry Schulze, an attorney for the Freethinkers Association, said Rapert’s interpretation of the case was wrong. “It is true that the Supreme Court … did not take the Ten Commandments down in Van Orden, but the circumstances were very different.” First, Schulze said, the Texas monument had been in place for forty years when the challenge was brought — a fact cited by Breyer. “Second, it was in a different type of arrangement and there was no risk that case, the Supreme Court found, that people would confuse it with … the position of the state. Here, with this monument, the language is prescribed by [Rapert’s] Act 1231. The legislature said exactly what words had to go on there. This is the speech of the state of Arkansas. This is the speech of the legislature.”

During the question-and-answer portion of the dedication ceremony, Greaves attempted to challenge Rapert on the question of the Van Orden precedent, telling the senator he did not understand the case.

“This gentleman is … not part of this,” Rapert told the crowd from the podium. “As a matter of fact, this gentleman has actually opposed the monument and literally went over and apparently stood on that truck in the middle of the night here in Little Rock and posted a picture of it which is … a criminal trespass.”

“Oh, it is not,” Greaves said. Supporters of the Ten Commandments monument began clapping and cheering to drown him out. “Thank you, God! Thank you, God! Hallelujah, Jesus!” cried one woman.

Rapert said Thursday that any excess funds held by the American History and Heritage Foundation after completing the Ten Commandments project will be put toward similar use. “Other people in other states have already asked us to help them. … The American History and Heritage Foundation is committed to helping any city, any town, any county and any state erect monuments to the Ten Commandments,” he said, to applause.

Asked if the group would only support the creation of Ten Commandments displays, he “no, we’d be happy to do other things.” The group has purchased 9,200 posters reading “In God We Trust” that it is donating to various communities, Rapert said. “We’d be open to doing monuments, seminars, posters.”

He demurred on the question of the fund balance currently held by his group. “I’d have to ask the treasurer … but with the monument we’re seeing, it’s probably very likely those funds would run out soon,” he said, though he added that about $86,000 had been raised to pay for the display erected at the Capitol. “The cost for all this is still not fully known. We still have invoices that are coming in from the monument company.”

When a reporter asked Rapert if he was concerned about forthcoming legal challenges and the potential cost to the state, the senator said he was not. He’d talked to the attorney general’s office already, he said.

“The attorney general feels quite comfortable defending the monument against any lawsuits,” he said. He noted that Act 1231 allows the legislature to direct the cost of any legal fees to First Liberty Institute, a Texas-based group.

Earlier, when speaking to the Arkansas Times, Greaves questioned whether the case was worth defending. “The idea here is that First Liberty might defend litigation against this, but I don’t know if they’ll take it at this point — because the senator, Rapert, has done such a poor job at sticking to the speaking points. That this is supposed to be of historical import, that this is supposed to send some sort of secular message about the codification of American law — because he goes running off to the pulpit and starts declaring this is a Christian nation, making very clear that he wants to bring the Gospel into the public square. And that stuff’s certainly not immune from being dredged up in the courts. …

“I just feel like there’s a crushing preponderance of evidence to establish that Rapert — the pastor senator — is absolutely trying to impose his religious viewpoint on the public grounds to the exclusion of others. I think it’d be hard at this point to say otherwise, and even a court that might be inclined to leave the Ten Commandments up will have a difficult time coming up with a legal justification for that,” he said.