Attorney General Leslie Rutledge‘s ballot-initiative blockade will soon be heading to court. Rutledge herself has been subpoenaed to testify; the attorney general’s office is fighting that subpoena.

Before seeking signatures to make the ballot, proposed initiatives must first gain approval from the attorney general. Rutledge has thus far rejected 69 proposals this election cycle and approved zero. Because gaining signatures is a time-consuming and costly process and a July deadline looms, time is running short for any potential ballot initiative. Critics allege that she is abusing her authority by foot-dragging on proposals that she doesn’t like.

Rutledge yesterday rejected a proposal by the group Driving Arkansas Forward to authorize the building of casinos in four counties (including one at Oaklawn in Hot Springs and one at Southland Gaming in West Memphis). Half of the tax revenues raised would go toward highways under the proposal. It marks the fifth time that Rutledge has rejected the group’s proposal. Rutledge also rejected a different proposal for four casinos by another group, Arkansas Wins, on Tuesday.

Among Rutledge’s quibbles on this latest attempt by Driving Arkansas Forward: she complained about the group using the word “authorized” rather than “required”; she stated that it was ambiguous how certain it was that Oaklawn and Southland would actually use casino licenses to conduct casino gaming; she claimed that in a clause that stated that Oaklawn and Southland were not required to continue racing in order to acquire or renew a casino license “it is unclear whether an existing license might nevertheless be forfeited as a consequence of ceasing to conduct racing.” Heh. This is a game of whack-a-mole, with petitioners answering Rutledge’s critiques, only to be met with ever tinier and more creative nits to pick as the clock runs out. Rutledge would find “See Spot Run” ambiguous. The meaning of this provision is unclear — voters are unlikely to understand ‘run’ in this context or whether other sensory impressions of Spot’s action are foreclosed by this proposal.

“At this point, the attorney general is violating the rights of every Arkansans under the state’s constitution,” said Alex Gray, an attorney for Driving Arkansas Forward, in a prepared statement. “Her conduct is very disappointing and we are evaluating our legal options.”

Gray said that the group will re-submit its proposal once again. One legal option the group is considering, Gray said, is joining a lawsuit filed in Pulaski County Circuit Court by a different group, also represented by Gray, that is proposing a ballot initiative that would seek to clarify the law on sovereign immunity. That proposal has likewise been rejected by Rutledge.

Circuit Judge Wendell Griffen will hear arguments in that case on May 18. Rutledge has been subpoenaed to testify but the attorney general’s office filed a motion to quash the subpoena yesterday. Griffen has yet to rule on that question.

Under state law, a ballot measure first needs to be certified by the attorney general. At that point, the amendment would need to collect around 85,000 signatures of registered voters by July to make it on the ballot in November. One point of contention for the groups blockaded by Rutledge is that under the law she could offer necessary revisions herself to clear up ambiguities (indeed, this is precisely what the law envisions the attorney general doing) but has refused to do so, rejecting every single proposal outright under a clause in the law that gives her authority to do so if a proposal is sufficiently misleading.

Before any initiative or referendum petition ordering a vote upon any amendment or act shall be circulated for obtaining signatures of petitioners, the sponsors shall submit the original draft to the Attorney General, with a proposed legislative or ballot title and popular name.

Driving Arkansas Forward, represented by Gray, last month petitioned the Supreme Court to force Rutledge to approve its ballot measure, seeking the redress outlined in clause (d) above. The 167-page complaint argued that over the course of four submissions it had addressed all of the concerns raised by Rutledge, that its proposed ballot measure was not in fact misleading, and that its language was “honest and impartial, free of any misleading tendency, and conveys an intelligible idea of the scope and significance of the proposed change in the law.” The attorney general’s office countered that her discretion was essentially unlimited, so long as she conducted the review and replied within 10 days as mandated by the law; they also argued that Rutledge was right on the merits in her analysis and the group’s proposal remained ambiguous. The Supreme Court denied Driving Arkansas Forward’s petition without comment, so it is not clear whether the Court concluded that Rutledge was right that the proposal itself was ambiguous or that Rutledge simply has extremely wide latitude to employ her review authority under § 7-9-107 (c).

Shortly after the Supreme Court rejected the petition, the group Committee to Restore Arkansas Rights (also represented by Gray) filed its own suit in Griffen’s court. That group has twice submitted a proposed ballot initiative for an amendment to the constitution that would clarify the law on sovereign immunity in the wake of the state Supreme Court’s sweeping decision earlier this year, reversing two decades of precedent, that the legislature cannot waive the state’s sovereign immunity (protection against lawsuits). The state constitution currently states, “The State of Arkansas shall never be made a defendant in any of her courts”; the proposal from Committee to Restore Arkansas Rights would add six words: “unless authorized by the General Assembly.” Rutledge has outright rejected it twice as misleading.

It its complaint in Griffen’s court, the Committee to Restore Arkansas Rights makes two arguments.

First, it argues that subsection (c) in the law (see above) is unconstitutional on its face. Article 5, Section 1 of the state constitution provides that “no legislation shall be enacted to restrict, hamper or impair the exercise of the rights herein reserved to the people. The complaint notes in the Driving Arkanas Forward case, the attorney general stated that her “review of ballot proposals is unquestionably a discretionary process” and § 7-9-107 (c) “places no boundaries on that discretion.” She further argued that the petitioner has no right to challenge her rejection — the only recourse is to resubmit and once again face her absolute discretionary review.

“Accordingly,” argues Gray in his complaint for the Committee to Restore Arkansas Rights, “the Attorney General admits that under Arkansas Code Annotated § 7-9-107 (c) she had unbridled, absolute discretion to approve and certify or reject all proposed constitutional amendments, and there is no review of her determinations. Therefore, Arkansas Code Annotated § 7-9-107 (c) restricts, hampers or impairs the exercise of the rights reserved to the people to propose constitutional amendments in violation of Article 5, Section 1 of the Arkansas Constitution.”

The second argument made in the complaint is that even if Griffen doesn’t find the statute itself unconstitutional, Rutledge’s application of the statute in her rejection of the group’s proposal is unconstitutional. Their proposal, they argue, is not misleading; Rutledge is abusing her power, misusing her authority under the law, and acting in bad faith simply to block it from proceeding. “Her actions are arbitrary and capricious,” the complaint alleges. Here’s the crux: 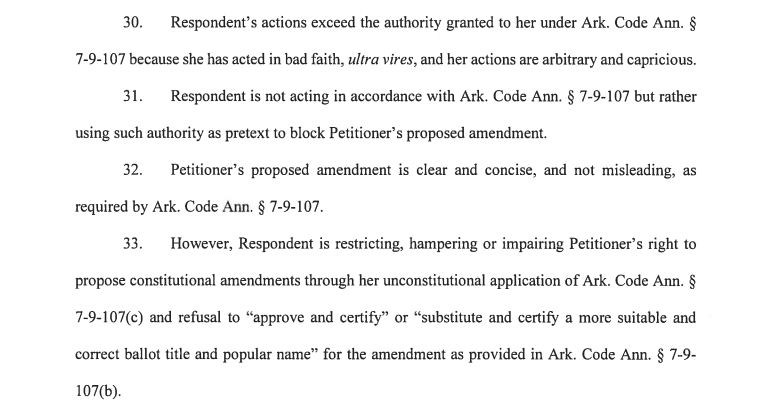 This case will go a long way toward determining whether initiatives will ever make the ballot or whether Rutledge will have unlimited authority to block measures she might not like. I’d expect some fireworks at the hearing, scheduled for May 18 at 10 a.m. It will be interesting to see how Griffen rules on the subpoena of Rutledge. Would certainly make for some entertaining drama if she has to testify.

David Couch, another attorney working on multiple initiatives stymied by Rutledge’s ballot blockade (on redistricting and raising the minimum wage), has said that he is considering legal action himself. He has previously stated that he is considering a federal lawsuit alleging that his constitutional right to petition is being violated by Rutledge’s misuse of the statute.

He said that he is also considering joining the lawsuit in circuit court by Gray if it’s “far enough along that I think we could get some relief in time to get it on ballot this cycle.” But he is leaning toward a federal suit, he said. “There are some other issues that I think the federal courts need to clear up in this process as well,” he said.

I resubmitted the redistricting initiative and addressed all the issues she raised. I changed the definition of immediate family member to the one she preferred, and deleted the provisions she had complaints about. So unless she raises issues that she has not raised in the past, then I see no reason why it should not be approved.

I also did the same with respect to the minimum wage initiative. I addressed everything that she raised. So she will have to raise something new for it to be denied.

If she denies either of these proposals and comes up with new objections that she has not raised previously then I’ll have no option but to seek judicial relief and her motive will be even more clear.

The foot-dragging may have its intended effect, Couch added: “If she does deny this time then she probably has run out the clock. It may be possible to resubmit wage one more time.”