Read this month's issue
Browse the issue archives
Advertisement
Home Arkansas Blog We have met the enemy: The open line

Well now, how about a 101-degree open line with news about who our enemies are.

Donald Trump informed the world today that the European Union is our — the former Soviet Union, not so much. Some people in Finland did make a display for human rights, something in low favor with Trump and his Putin.

Also today, MSNBC took a look at Arkansas’s implementation of a work rule for Medicaid. Gov. Asa Hutchinson is sure it will spur a work ethic in the poor and sick. Others aren’t so sure:

In meetings with state legislators, the Arkansas Hospital Association has expressed concern that many affected by the rules will either not be able to find work, or won’t be able to meet online filing requirements because they live in rural areas without reliable Internet access.

“We’re worried about people losing coverage who should not be losing their coverage,” said Bo Ryall, the group’s president.

As reported Friday, 7,000 failed the Internet-only reporting standard. Two more months and their health coverage gone, whether they’ve been working or not.

People of a certain age will remember: 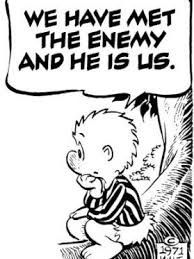