Jerry Walsh, 72, who ran the now-defunct South Arkansas Youth Services, has pleaded guilty to paying $120,000 to an unnamed Arkansas state senator in return for action favorable to the agency, Walsh others.

Here’s his plea agreement. It acknowledges a potential five-year maximum sentence, rarely given first-offenders who are cooperating witnesses and says restitution can be ordered. The government will recommend a downward departure from sentencing guidelines for his acceptance of responsibility.

This plea exposes the depths to which ‘pay to play’ politics has corrupted a non-profit organization which was formed with the best of intentions, to help children. Unfortunately, there are many victims in a scheme like this. The people of this state were deprived of the uncorrupted functioning of their government agencies, the non-profit was stripped of funds, and now that the non-profit has been shuttered, the community is deprived of a non-profit dedicated to providing services to their most vulnerable children, those who are incarcerated and in state custody. I look forward to a day when all politicians exercising influence do so based upon the best interests of the children in their communities and not on who is paying them for no-show jobs.

Unanswered today is when or if additional legislators will be charged.

This is a continuation of the public corruption probe that has already won guilty pleas or jury verdicts against former legislators Jon Woods, Micah Neal, Henry Wilkins, Eddie Cooper and Jake Files (Files for a public thievery charge unrelated to schemes in which the others were involved with the Preferred Family Healthcare nonprofit). Sen. Jeremy Hutchinson has also been implicated but not charged. He is, however, apparently not the unidentified “Senator C” to whom Walsh has admitted paying money. A number of people employed or working for Preferred Family have also pleaded guilty to federal charges.

The information notes that SAYS was organized as a tax-exempt non-profit, which meant it couldn’t engage in political activities, and that it received about $15 million a year in public money.

In May, Benjamin Hardy detailed South Arkansas Youth Services involvement in some of the previously disclosed schemes. It served delinquent youths in Magnolia until it went out of business in bankruptcy. The next day in May, Hardy interviewed Walsh. Walsh acknowledged a lobbying contract with Rusty Cranford, who’s pleaded guilty in the Preferred Family corruption case. But Walsh said he knew of no wrongdoing by Cranford.

Walsh also said then that SAYS had hired Sen. Hutchinson and then-Sen. Michael Lamoureux as attorneys, but not to take government action for them.  Again he characterized the work as aboveboard.

Today’s criminal charge ays Walsh and SAYS paid “Senator C” more than $120,000. He paid Cranford and his lobbying firm $130,000 and paid $132,000 to “person 4,” a relative of Cranford, who did work. Walsh concealed payments from his board and also didn’t report the lobbying payments, which a nonprofit isn’t allowed to make by law.

The criminal information says Walsh conspired with Cranford and a Senator C to embezzle. Walsh paid the senator legal fees and retainers in return for favorable action. It also says Walsh conspired to lobby for reduction of a $1.6 million claim against the state for the death of someone killed by a delinquent after the Division of Youth Services said any claim would come out of service providers’ budgets.

Near the end of the 2013 session, Walsh said Cranford said he needed to hire Senator C and Person 4 and pay Cranford more to prevent a state plan to move to out-of-state providers. He said he met with the senator in May at the Capitol to firm up the plan.

The information also details Walsh’s agreement to pay Cranford’s relative $60,000 a year for no work and then hiring that person for $72,000 as a “child advocate” though the person couldn’t pass a background check. Though he was repeatedly admonished for not showing up for work, he was paid through 2016. 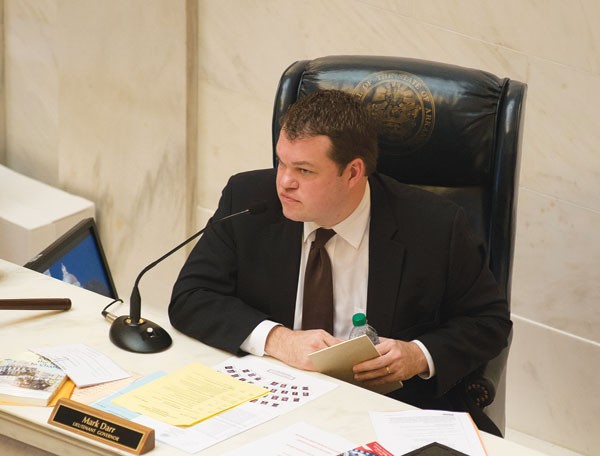 Today’s developments make more interesting some of the things Walsh told Benjamin Hardy in his May interview.

Walsh said SAYS retained Lamoureux’s legal services when he was still in the Senate — that is, before 2015. Walsh said he was concerned the state was treating his nonprofit unfairly and failing to follow its own procurement process.

“We knew they were going to take away our contract … and they were not following the procedures to do that and [we] felt we needed some help, and I hired Mr. Lamoureux,” he said. Walsh said he felt Lamoureux would be qualified to help SAYS because he had a background as a public defender and understood the topic of juvenile justice.

Walsh said Lamoureux, like Sen. Hutchinson, also made it clear his role as a legislator could not intersect with his simultaneous work for SAYS.

“Now, he didn’t do any bills or anything like that,” Walsh said. “I had the same kind of meeting with him as with Hutchinson. He said what he would do, what he wouldn’t do.” Walsh also said that after Lamoureux resigned to become chief of staff for Governor Hutchinson, he never asked Lamoureux for favors.

The description of Senator C in the criminal charge says that he had a “senior position” that included the power to decide which bills came to the floor for a vote and which bills got funded and he also voted on state contracts as a member of the Legislative Council. Lamoureux, who left the Senate in November 2014 to become Gov. Asa Hutchinson’s chief of staff, was president pro tempore of the Senate in 2013 and had such powers. He departed the governor’s staff in May 2016 to become a lobbyist.

I received a response from Lamoureux to e-mailed questions about today’s development and his business relationship with Walsh, as described in Walsh’s interview with us. His response:

I am just learning about this. I have not have [sic] any communication with law enforcement about this development.

Neither legal fees nor campaign contributions have ever influenced my behavior as a public official.

Once I have a clearer understanding of the situation I will comment further.

Hardy’s interview with Walsh in early May included this:

Walsh said he believes SAYS and other clients of Cranford “were used” and predicted more legislators would be implicated in the widening federal probe.

“There’s going to be a lot of people making statements. There’s all kinds of allegations, and if you had any dealings with Cranford Coalition, you’re going to be tainted. Some of it will be true, and some of it won’t be,” Walsh said.