KATV reports on financial troubles Gary Gibbs and his businesses, including a hotel in Hot Springs and a resort in Desha County. The article reports also on a complaint filed by a prosecutor against Gibbs, who’s been a political player in the past.

To summarize the report by Matt Mershon of KATV:

* Allegations of unpaid bills are piling up against Hotel Hot Springs owned by Gibbs. These include bills from a food supplier and elevator company.

* Gibbs’ personal residence at Tillar and his Delta Resort and Spa are delinquent on property taxes. also has a residence in Franklin, Tenn.

* He’s been sued for breach of contract over an outdoor sporting show.

* Woodruff County Deputy Prosecutor John Bell has written the attorney general and Tennessee officials about a complaint from a Woodruff County resident that Gibbs had taken advantage of an elderly woman in Tennessee with dementia to obtain almost $300,000 in loans that haven’t been paid back. I’ve seen letters between the woman and Gibbs in which he insists she’ll be paid back, but he apparently hasn’t done so.

Gibbs didn’t respond to calls for comment from KATV.

The story didn’t mention it, but Gibbs also has a political track record in Arkansas. The Democrat-Gazette reported in 2014 that he and related companies had by then contributed more than $70,000 to Democrat Mike Ross’ campaign for governor, the highest amount from a related source they could identify. In that year, corporate contributions were still legal. Gibbs’ contributions came from relatives and various businesses.

This year, Gibbs’ name doesn’t turn up readily in searches of online campaign contribution databases for 2018. But, it so happens Gibbs’ Delta Resort was the venue for Desha County Republican’s Lincoln Day Dinner at which Gov. Asa Hutchinson spoke.  “Celebrating Delta Life” was the title of the event. 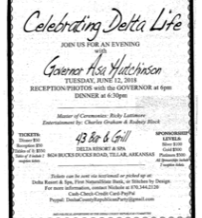 It perhaps was a straight-up rental in which Gibbs had a paying customer that happened to feature a political speaker he’d opposed in 2014. Sounds like he needs paying customers. As yet, no report is on file for the Desha County Republican Committee.

Susan & I had a great time tonight in Desha County at the "Celebrating Delta Life" dinner hosted by the County Republican Committee! #Arpx pic.twitter.com/U6hEdb419N

UPDATE: Sarah Dunklin, Desha County GOP chairman, confirms they paid for use of Delta Resort for the Asa dinner. She said they got a better rate than anybody else offered.